The Republic of Palau is located in the western Pacific and consists of a total of 241 islands, eleven of which are permanently inhabited. Like the islands of the neighboring state of Micronesia, the Palau Islands belong to the Carolines. The country covers 501 km². Most of the islands lie within an approximately 110 km long coral reef that surrounds a lagoon of around 1,300 km². The largest island is Babelthuap (Babeldaop) with 406 km², south of it lies the island of Koror, on which the capital of the same name is located. Other islands include Ukukthapel, Eil Malk, Ngerol, Peleliu and Angaur southwest of Koror.

The islands of the republic are all volcanic in origin. While some of them are made of volcanic rock and protrude high from the sea (e.g. Koror and Babelthuap, where the highest point is at 242 m), other islands consist of coral limestone, which has built up on sunken volcanic cones. These islands (e.g. Peleliu and Angaur) are flat and often only protrude a few meters above the sea surface.

One of the scenic sights in the South Pacific is the Rock Islands (Chalbacheb), which stretch between Koror and Peleliu. These are hundreds of tiny dome-shaped coral reefs covered with lush vegetation.

The climate on the Palau Islands is tropical with high temperatures all year round (average 28 °C). Annual rainfall is around 3,800 mm, although it is drier on the flatter islands. Much of the rainfall falls from July to October, during which time tropical cyclones also occur.

The high volcanic islands are covered with tropical rainforest. The coasts are often lined with impenetrable mangrove forests. Coconut and pandanus palms predominantly grow on the flatter coral islands with the nutrient-poor soils. In general, the diversity of vegetation on the islands decreases towards the east.

Only bats are native mammals, all others were introduced by humans. Saltwater crocodiles that can be up to five meters long have become rare. The bird life is very diverse; In addition to numerous seabirds, there are parrots, birds of paradise, spectacled birds and various types of pigeons, one of which (Biib) is the national bird of Palau. The underwater world is extremely diverse: an estimated over 1,400 different species of fish live in the coral reefs, including manta rays, reef sharks, butterfly fish, barracudas, triggerfish and snappers. In addition to a variety of coral and sea anemone species, the giant clam also occurs here.

The population is made up of over 70% Micronesians and groups from Filipinos, Malays, Melanesians, Japanese, Chinese and Americans. The official languages ​​are English and Palauic (English and Sonsoral in Sonsoral, English, Japanese and Angaur in Angaur), and other regional dialects are also spoken. Almost 30% of the population are followers of traditional religions (e.g. fashion kneeling), around 65% are Christians (about two thirds of whom are Catholics).

Traditional villages are predominant on the islands, and the family is the most important element in social life. The education system is well developed and there is a primary school on each of the inhabited islands. The illiteracy rate is only 8%. 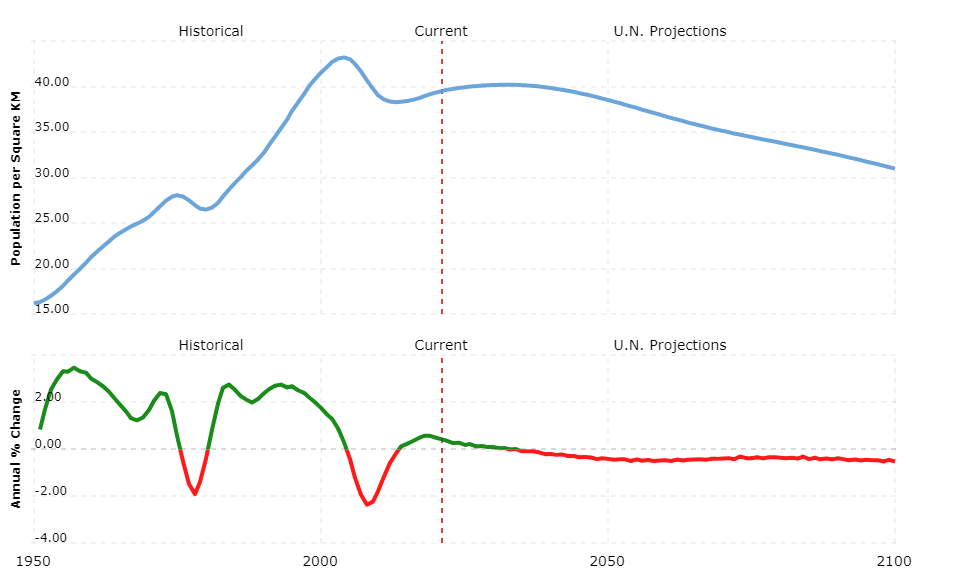 The Republic of Palau is a presidential republic under the 1981 constitution. The head of state is the President, who is also head of the government (since January 2013 Tommy Remengesau). He is directly elected by the people for a term of four years.

The legislature lies with the parliament (Olbiil Era Kelulau), which consists of two chambers: a delegate house with 16 seats and a senate with 13 seats. The members of both chambers are elected by the people for four years each. There is also a 16-member assembly of chiefs (Council of Chiefs) as an advisory body. There are no political parties in Palau.

In defense policy, the interests of the Republic of Palau are represented by the United States (Free Association Treaty of 1994).

Palau is divided into 16 counties (states).

In terms of per capita income, the Republic of Palau is a relatively wealthy country in the region ($ 10,800 in 2012). However, much of the state budget is financed with US economic aid.

Agriculture and fisheries are mainly carried out in subsistence farming; around a fifth of the population works in this sector. The most important crops are coconuts, cassava and bananas. Coconuts, copra and, to a lesser extent, fishery products are exported.

The industry is poorly developed, there are only a few food processing companies. Handicrafts are also made from natural materials.

The most important economic sector is the service sector with a share of around 77% of the gross domestic product (GDP). The vast majority of all employed people work here. Tourism accounts for 70% of total GDP and has had stable growth rates since the mid-1990s. Most tourists come from Asian countries, especially Japan and Taiwan, but also from Korea. Americans are the largest group of visitors outside of Asia. The coastal waters are a paradise for divers in particular.

Above all, Palau has to import food, machinery and consumer goods. The most important trading partners are the USA, Guam and Japan.

So far there are only a few paved roads on the larger islands. The main seaport is on the island of Koror, an international airport on Babelthuap.