The Islamic Republic of Pakistan is located in South Asia and, with an area of ​​796,095 km², is more than twice the size of Germany. The country borders India to the east, the Arabian Sea to the south, Iran to the southwest, Afghanistan to the west and China to the north.

The northern part of Pakistan is characterized by high mountains. The mountain ranges of the Himalayas, Karakoram and Hindu Kush meet here. The highest elevation is the K 2 (also called Mount Godwin-Austen) in the Karakorum, which at 8,610 m is the second highest mountain in the world after Mount Everest. The summit is in the Kashmir region (Jammu and Kashmir), which is claimed by Pakistan as well as by India and China.

In the west and south-west of the country lies the highlands of Baluchistan, which is characterized by deserts and steppes and is dominated by several mountain ranges (Tobakar, Siahan, Sulaiman, Kirthar Mountains). Here heights of almost 3,600 m are reached. To the east is the Indus lowland, which is crossed by the river of the same name and in the northern part by its four tributaries Jhelum, Chenab, Ravi and Sutlej. With an area of ​​around 518,000 km², the Indus lowlands occupy more than half of the country’s area. With a total length of about 3,200 km, the Indus is the longest river in the Indian subcontinent; on Pakistani soil, its length is about 2,200 km. The Indus flows into the Arabian Sea in southern Pakistan in a wide delta. In the southeast, the country shares in the Tharr Desert (Great Indian Desert),

The capital Islamabad (since 1959, previously Karachi) is in the northern part of Pakistan.

In general, the climate in Pakistan is continental, due to the size of the country and the different altitudes, temperatures and rainfall vary considerably in the different regions. In the mountains in the north and west of the country, winter temperatures drop below freezing, while in most of the lowlands the average values ​​are around 13 °C. In the capital, Islamabad, in northern Pakistan, values ​​of 9 °C are measured in January and 32 °C in July. In Karachi on the coast to the Arabian Sea, the January average is almost 20 °C, the July values ​​around 31 °C.

The whole country is characterized by drought. The greatest rainfall (900 to 1 200 mm) is measured in the southern Himalayas. In the Indus lowlands fall between 300 mm and 500 mm annually, in the coastal region it is 100 to 200 mm. Extreme arid areas are, for example, the Tharr Desert in the southeast and parts of the highlands of Baluchistan in southwest Pakistan.

Almost 4% of the country’s area is occupied by forests, which are mainly found in the northern mountains. Spruces, pines, cedars and oaks grow up to a height of around 3,500 m. Alpine mats can be found above the tree line. Thorny shrubs, acacias and hard grasses grow in the steppe areas. The extreme dry areas are almost without vegetation. The Indus lowlands are largely used for agriculture. There are mangrove stocks in the Indus Delta.

The sparsely populated areas in the northern mountains offer a suitable habitat for animal species such as snow leopard, brown bear, ibex and screw goat. Bezoar goats, hyenas, jackals, caracals, monitor lizards and various lizard species live in steppe areas. Typical animal species for the Indus lowlands and delta are, for example, crocodiles (including the up to 6 m long gaviale), water snakes, the Ganges dolphin and numerous water birds such as pelicans and herons.

About 162.42 million people live in the Islamic Republic of Pakistan, about 33% of them in cities. The largest city is Karachi with an estimated 12.4 million residents. Other cities with over a million residents are Lahore (5.54 million), Faisalabad (1.99 million) and Rawalpindi (1.41 million). According to COUNTRYAAH, 800,000 people live in the young capital of Islamabad. The average population density is around 204 residents per square kilometer, with more than 80% of the population living in less than a third of the country’s area, especially in the northern and central part of the Indus lowlands.

Several ethnic groups live in Pakistan. The largest group is that of the Punjabi (Punjabi, approx. 50%), who mainly live in the Pundjab and the neighboring regions. The next largest population groups are Pashtuns and Sindhi, each with about 15%. The Sindhi live mainly in the south of the Indus lowlands (Sindh province). Like the language of Punjabi, the language of Sindh belongs to the Indo-Aryan languages, while the Pashtu of the Pashtuns (also called pathans) is one of the Iranian languages. Other minorities with about 5% of the population are the Baluchi, which belong to the Iranian peoples, the Balti and the Brahui. An estimated two million Afghan refugees live in Pakistan.

The official official language Urdu is spoken as a mother tongue by just under 10% of the population. This Indo-Aryan language largely corresponds to the Hindi used in India. Punjabi is widespread, and Sindhi, Pashtu, Baluchi and other languages ​​are spoken. English is particularly important in more educated circles.

More than 96% of the population profess Islam, which is the state religion. In turn, over 80% of Muslims are Sunnis. Christians, Hindus, Parses and Sikhs form religious minorities.

The standard of living in Pakistan is low. The medical care of the population is inadequate, especially in rural areas. The mean life expectancy is 63 years, the infant mortality rate is 7.3%. The population grows by an average of 2%. Not even half of Pakistani (only 30% of women) can read and write. 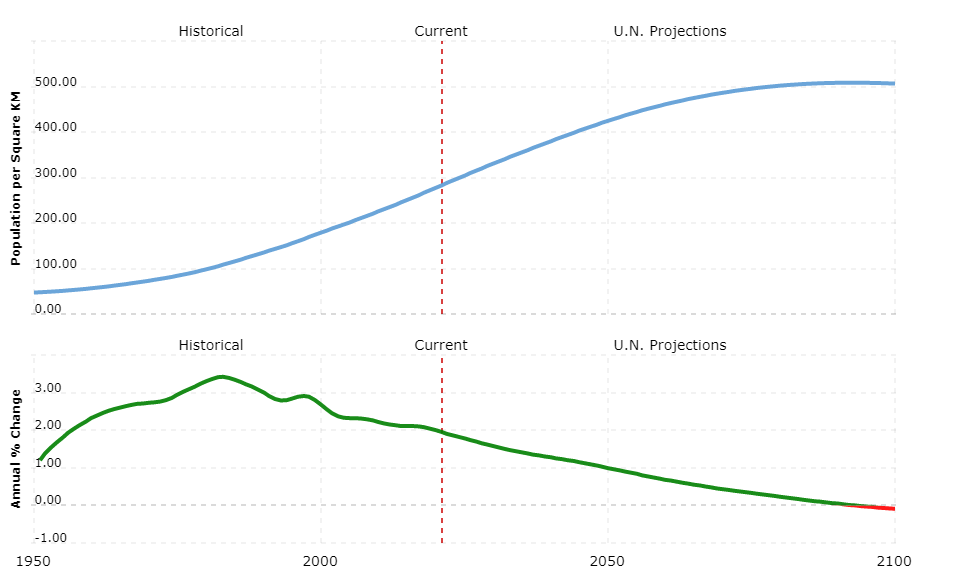 Pakistan is an Islamic republic under the 1973 constitution. The head of state is the president (Mamnoon Hussain, since September 2013). According to the constitution, he is elected by an electoral college every five years. The prime minister is elected by parliament (Nawaz Sharif, since June 2013).

The Islamic Republic of Pakistan is a federal state consisting of four provinces, a capital district and the areas occupied by Pakistan in the former principality of Jammu and Kashmir, which are also claimed by India.

Problems are the enormous inflation rate, a high deficit in the balance of payments, the high underemployment, the deficient (energy) infrastructure, the strong dependence on agriculture and oil imports and the rapidly growing population. This leads to low incomes despite relatively stable growth rates, almost a quarter of the population lives below the poverty line.

Around a third of Pakistan’s area is agricultural land. A fifth of GDP is generated in agriculture, and almost every second employee is employed here. Large parts of the acreage must be artificially irrigated. The main crops are cotton, wheat, rice, corn and sugar cane. Cattle and sheep breeding is partly carried out by nomads.

Pakistan has deposits of petroleum, natural gas, coal, rock salt, limestone, ores and chromium. A large part of the mineral resources is used only little. The industry focuses on processing cotton into textiles and clothing, as well as food processing. Other sectors are fertilizer, steel, cement and chemical industries. Around 20% of the workforce is employed in this area. Regionally produced handicrafts such as carpets and pottery are exported. The country’s energy requirements are mainly covered by thermal and hydropower plants. There are two nuclear power plants.

Around 260,000 km of roads (almost 160,000 km of asphalt) are available in Pakistan. The railway network covers approximately 7,800 km. Karachi is the largest seaport on the Arabian Sea. The main international airports are in Karachi, Lahore and Islamabad.

The currency is the Pakistani rupee.