The Sultanate of Oman is located in the southeast of the Arabian Peninsula. With an area of ​​309,500 km², the country is about the size of Italy. Oman borders the United Arab Emirates in the northwest, Saudi Arabia in the west and Yemen in the southwest. The northern part of the Ruus Al Jibal peninsula, which lies in the north of the United Arab Emirates, is an exclave to the territory of Oman, from here the country monitors the Strait of Hormuz, a strait that connects the Persian Gulf with the Arabian Sea connects and thus represents one of the most important shipping routes. Oman also includes the Kuria Muria Islands and Masirah Island off the country’s east coast.

In the northeast of the country, between the city of Muscat and the border with the neighboring country of the United Arab Emirates, lies a fertile coastal plain (Al Batina) that is around 300 km long and between 15 and 30 km wide. To the south of this extends the Oman Mountains (Al Hajar) with heights of over 3,000 m (the highest elevation in the country is the Jabal Akhdar at 3,018 m). Further south is the Inner Desert (Jiddat al Harasis), which occupies the central part of Oman. In the west, gravel and stone deserts merge into the Great Arab Desert (Rub al Khali), the majority of which lies on the territory of Saudi Arabia. The desert extends to the coast of the Arabian Sea. In the Dhofar province in the south of the country, the Karaberge mountains reach heights of up to 1,600 m.

The capital city of Muscat is located on the northeast coast of the Gulf of Oman.

Oman’s climate is characterized by high temperatures all year round. In the capital city of Muscat on the Gulf of Oman, average temperatures of 22 °C are measured in January and 34 °C in July. A hot fall wind from the Oman Mountains (Gharbi) causes the temperatures to rise above 50 °C in summer. Trade winds and the foothills of the Indian monsoons provide relatively high humidity on the north coast, but the average rainfall in Muscat is low at around 100 mm per year. Up to 500 mm are measured regionally on the slopes of the Oman Mountains, while it is extremely dry in the desert regions.

Much of Oman is covered by deserts and semi-deserts with dry grasses and thorn bushes. Juniper, acacia, olive trees, cedar, jasmine and mulberry figs grow in the regions with higher rainfall (mountain slopes of the Oman Mountains). In the Kara Mountains in the province of Dhofar, mainly dry shrubs grow, including the frankincense tree and myrrh bushes.

The formerly species-rich animal world is partially endangered due to the narrowing of the habitat and strong hunting in their stocks. Leopards, wolves, lynxes and hyenas are rarely found, and the white oryx is considered to be virtually extinct. Mountain goats, smaller mammals, birds, snakes and scorpions are common.

Around 2.35 million people live in Oman. In addition there are over half a million foreigners, mostly from other Arab countries, Iran, Persia and India or Pakistan. Only those who are born to Omani parents are Omani citizens. With around 8 residents per square kilometer, the country is statistically very sparsely populated; in fact, around 95% of the country’s territory is not populated at all or only inhabited by nomadic Bedouins. The fertile Al Batina plain on the Gulf of Oman, the greater Muscat region and the coastal plain of the Dhofar province are the most densely populated. The capital city of Muscat on the Gulf of Oman has about 635,000 residents in the metropolitan area. Other populous cities are Seeb (223,000 residents), Salalah (157,000 residents), Ibri (98,000) and Suhar (105,000).

According to COUNTRYAAH, 88% of the population belong to Islam, which is the state religion in Oman. Just over half of the Muslims are Ibadites and around a quarter are Sunnis. Hindus and Christians form small religious minorities. The official language in the country is Arabic, and English is the usual commercial language.

Social, education and health care are well developed. The average life expectancy is 73 years, the population growth is estimated at around 3.3% and is mainly based on natural growth (surplus birth) and not on immigration. Three quarters of Omani can read and write. 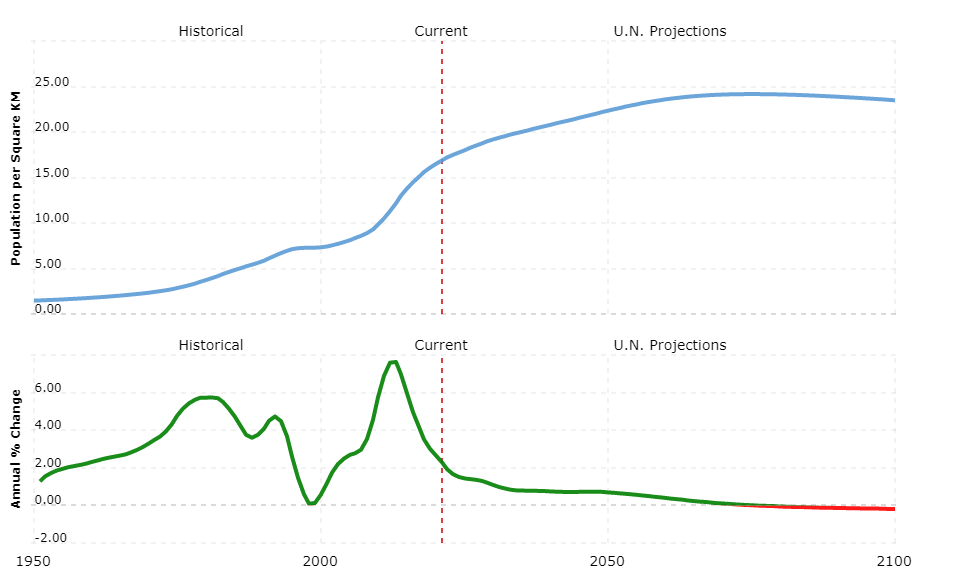 The Sultanate of Oman is an absolute hereditary monarchy with a constitution of 1996. The Sultan (Qaboos bin Said Al Said since 1970) is head of state and at the same time head of the government. He appoints the members of the cabinet and the 59 members of the State Council (Majlis al-Dawla), which has an advisory role. There is also an advisory assembly (Madjlis al-Shura) with 84 seats. Their deputies are elected for three years in general elections. Her powers were expanded significantly in October 2011. Both chambers have the right to initiate legislation. Political parties are prohibited, but unions have been admitted since 2006.

The case law is based on Islamic law.

Oman’s prosperity is based on oil production. Oil has been extracted since the second half of the 1960s, the most important deposits are in the province of Dhofar and in the south of the Oman Mountains. The government is making some efforts to diversify the economy as the deposits are expected to be exhausted around 2020 and production has been declining since 2004 due to geological problems. Natural gas production began at the end of the 1970s, and a gas liquefaction plant was completed in 1998 to allow exports to begin. Other important factors for the economy of Oman are the large copper deposits (1994 copper smelter was completed) and efficient agriculture. The high unemployment rate caused by the government through “Omanization “(the replacement of foreign workers by Omani workers).

About 5% of the country’s area is used for agriculture. Thanks to large underground water reservoirs, the fields can be irrigated. Dates, tomatoes, melons, wheat, corn, olives, citrus fruits and cotton are mainly grown. The population’s own food needs can be covered in many areas. Livestock farming is partly in the hands of nomadic Bedouins. Fishing also plays an important role in the supply of food.

The focus of the moderately developed industry is the processing of oil and natural gas. Furthermore, mainly building materials such as cement are produced. The industry generates around 57% of the gross domestic product.

Around 80% of the export volume is accounted for by oil and natural gas, and dates and frankincense are also exported. Machines, vehicles and industrial goods are mainly imported. The main trading partners are Japan, the United Arab Emirates, China, South Korea and the USA.

State-sponsored tourism has developed in Oman in recent years.

The country’s main ports are at Muscat and Matra, international airports are also located near the capital Muscat and in Salalah on the southwest coast.

The currency is the Omani rial, which has a fixed exchange rate to the US dollar.