The Democratic People’s Republic of Korea (North Korea, Korea has been divided since 1945) lies in East Asia and occupies the northern part of the Korean peninsula as well as a narrow strip on the East Asian mainland. In the north, North Korea borders on China and Russia, in the east on the Japanese Sea, in the south on South Korea(Republic of Korea) and in the west on the Yellow Sea. With a national area of ​​121 638 km², the country is about a third the size of Germany.

Most of the country is mountainous, the highest peak in North Korea is Paektu-san at 2,744 m, which is located in the northeast near the Chinese border. The Nangnim-Sanmaek mountain range runs from north to south, the Hamgyong-Sanmaek chain from northeast to southwest. From the strongly structured coast of the Yellow Sea, the country gradually rises up to the 100 km wide coastal plain, in the east it drops steeply to the Japanese Sea. Here the coast is not very structured.

Numerous rivers run through the mountainous country, the longest is the Jalu with a total of 790 km, which also forms part of the border with China. The capital of North Korea, Pyongyang, is located in the west of the country on the Korean peninsula.

The climate in North Korea is characterized by hot, humid summers and cold winters with little rainfall. In the capital Pyongyang, the average July temperatures are 24 °C and the January values ​​are -8 °C. The annual rainfall is about 910 mm, the rain falls mainly in the summer months.

Over 60% of the country is forested, mixed forests with oak, beech, maple and birch predominate. Above 1 100 m the mixed forest changes into coniferous forest, typical types of trees here are fir, spruce, pine and larch. From an altitude of approx. 2,000 m, subalpine vegetation with grasses predominates. In the lower-lying areas in the west of the Korean peninsula, the original vegetation has given way to agricultural use.

Typical forest animals such as red deer, foxes and wild boar can be found in the forests of North Korea. In the more remote regions there are also bears, wolves, tigers and leopards. The bird life is rich in species, especially in the coastal areas.

A total of around 23 million people live in North Korea, although the estimates differ widely and there are no official figures. The growth rate of the population of 0.7% is based only on assumptions. Two thirds of the North Koreans live in cities. The largest city is the capital Pyongyang with about 2.91 million residents. Other large cities include Hamhung (around 700,000 residents) and Chongjin (around 580,000 residents).

According to COUNTRYAAH, 99% of the population are Koreans, the largest minority are Chinese, and some Japanese live in the state. The official language is Korean, and Chinese and Russian are sometimes used as commercial languages. The traditional religions in this region are Buddhism and Confucianism, but their importance has been severely restricted by the socialist ideology of government. Officially, almost 70% of the population are considered to be non-denominational. Widespread is shamanism (15.5%) and the chondokyo religion (13.9%), which combines both Buddhist and Christian elements.

The standard of living of the population is much lower than in South Korea; In the 1990s there were repeated famines among the population. There is a nationwide social and health system. The average life expectancy is 71 years. School attendance is compulsory for children from the age of four. The literacy rate is given as 99%. 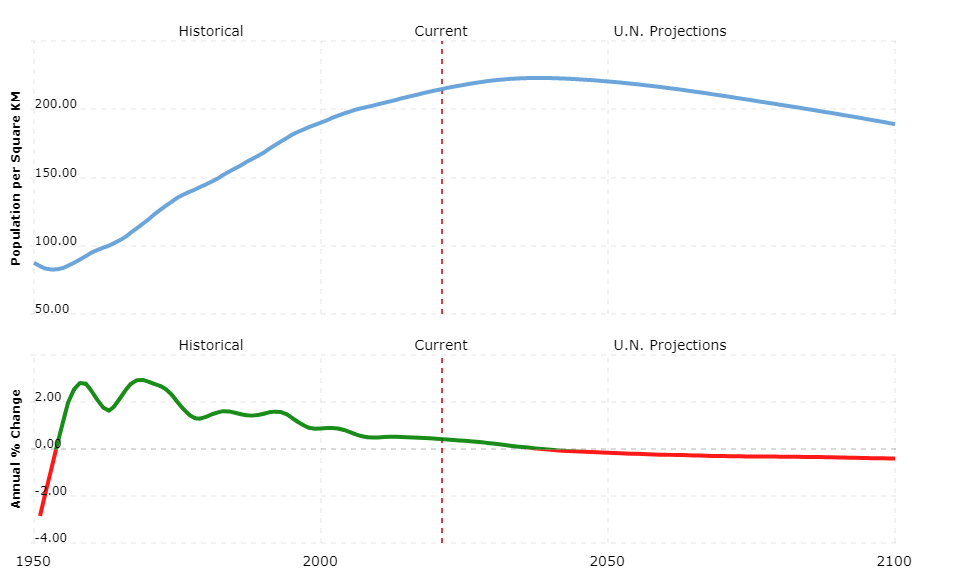 According to its 1972 constitution, the Democratic People’s Republic of Korea is a socialist state. In fact, power is exercised by the Kim dynasty and its confidants. The Korean Labor Party (PdAK) and the military are also influential. The de facto head of state is Kim Jong-un as 1st Secretary of the PdAK and Supreme Commander of the Armed Forces (since April 2012).

At the same time, the constitutional organs exist: the parliament (Supreme People’s Assembly) has 687 seats; the people are elected by the people for a term of five years. The Head of Protocol is the Chairman of the Presidium of the Supreme People’s Assembly (Kim Yong-nam, since 1998). The Defense Committee and the Cabinet of Ministers are further state organs. The head of government is Pak Pong-ju (since April 2013). Opposition movements in the country are not tolerated. All North Koreans have the right to vote on their 17th birthday.

North Korea is divided into nine provinces and three “special administrative regions”. There are two “special cities”, and the capital Pyongyang is directly administered by the government.

With the collapse of the Eastern Bloc, North Korea lost its most important trading partners and their economic aid. There are always famines that are triggered by the socialist planned economy and poor harvests. The country is dependent on extensive international aid programs. In 2002, the subscription certificate system that had existed in North Korea was abolished; Businesses and private households were converted to money management. The currency reform in 2009 further weakened the economy.

Around 20% of the land area can be used for agriculture, and around a third of the workforce is employed in this sector. The main crops are rice, corn, potatoes, soybeans, cereals, tobacco and vegetables. Pigs, cattle and chickens are kept in cattle breeding. Fishing is very important for the supply of the population. Although the population’s own needs cannot be met, food is also exported.

The industrialization of North Korea was already being promoted at the time of the Japanese occupation, today many of the factories are outdated and suffer from a chronic lack of energy or spare parts. Significant sectors are steel and iron production, machine and vehicle construction and the chemical industry. The country’s mineral resources include hard coal and brown coal, iron, copper, tungsten, lead, graphite and gold.

The transport network is only moderately developed. The railways are of the greatest importance here, with a network of around 5 200 km. Of the approximately 31,000 km of roads, just under 2,000 km are paved. Significant trading ports are Chongjin, Wonsan and Hungnam. There is an international airport near the capital Pyongyang.

Currency is the North Korean won.