Nigeria has an area of ​​923,768 km2 and is located on the west coast of Africa. It is the most populous country on the continent. The country borders Niger and Chad in the north, Cameroon in the east, the Gulf of Guinea in the south and Benin in the west. See Niger country abbreviation.

In the middle of the flat coastal region lies the great delta of the Niger, which connected further north with the course of the Benue and flows here into the Gulf of Guinea. The swamps and mangrove forests reach more than 100 km in the hinterland. Further north, the country gradually rises to the northern Nigerian plateau: in the middle is the Bauchi Plateau (up to approx. 1,200 m), on which the Jos Mountains (up to 1,780 m) lie. In the far north there is a semi-arid zone. The Bornu plateau in the northeast descends to Lake Chad, in the northeast are the foothills of the Adamawa highlands with Nigeria’s highest mountain, Vogel Peak at 2,042 m. The largest city in the country with around 8.8 million residents in the urban area is Lagos on the Gulf of Guinea, which was also the capital of Nigeria until 1991 (since 1991 Abuja).

The climate in Nigeria is tropical, with precipitation decreasing strongly from the hot, humid south to the north: around 800 mm are measured annually in Kano in the north and around 1,800 mm in Lagos on the Gulf of Guinea. The southeastern part of the coast with up to 3,000 mm is one of the rainiest areas in Africa. In the southern part of the country the rainy season lasts from April to November, in the north it is around two months shorter. In the extreme north of the country, the dry climate of the Sahel region prevails.

According to the very different amounts of precipitation, there are different vegetation zones in Nigeria. Mangrove forests and swamps predominate in the coastal areas. Large parts of the tropical rainforest, which mainly occurred in the southeast of the country, was cleared for agriculture and wood processing (e.g. mahogany, iroko) and replaced by oil palm forests. Towards the north there is a wet savannah with tall grass and baobab and carob trees. There are only a few trees left in the dry savannah further north, e.g. on the rivers. Acacia and dump palms are found in the arid northeast (Chad basin). Nigeria is estimated to have lost over 80% of its original forest area. The remaining stocks have meanwhile been declared nature reserves or are located in game and national parks (such as Kainjisee National Park), but the protective measures do not seem to be sufficient or are given too little attention.

The once very diverse wildlife of Nigeria has been greatly decimated due to the restriction of its habitat. Species from the tropical rainforest are particularly affected. These include, for example, forest elephants, African wild dogs, various types of monkeys (such as mandrill, gorilla), vervet monkeys, forest buffalos, okapis, leopards and brush pigs. Various types of antelope, giraffes, crocodiles and hippos live in the savannah. The bird life in Nigeria includes various species of parrots, birds of prey and blessings.

An estimated 129 million people live in Nigeria; the state is the most populous country on the African continent. The residents belong to over 250 different ethnic groups. The most significant are the peoples of Haussa and Fulani in the north of the country with a total of 30%, the Yoruba (Joruba) with 21% in the southwest and the Ibo (18%) and Ibibio in the southeast. Each of these groups has its own language and culture. The official language is English, but not all Nigerians speak it fluently.

According to COUNTRYAAH, 50% of the population are followers of Islam, most of whom live in the north of the country. Christianity predominates in the south, around a quarter of the total population is Protestant and around 12% is Catholic. In addition, natural religions and various forms of Christianity are practiced. The conflict between the Islamic peoples of the north and the Christian peoples of the south, which continues to lead to bloody conflicts in the country today, has a centuries-long history.

The literacy rate in Nigeria is estimated at just under 68% (around 30% in 1970). Primary schools are often difficult to reach for the rural population. Secondary schools are offered, but only around a fifth of all elementary school children take part. The population growth is a high 2.35%, despite the poor medical care of the population. Infant mortality is 10%; Due to the large number of people infected with HIV (5.5%) and the spread of other infectious diseases such as hepatitis, malaria and meningitis, the average life expectancy is only 47 years. 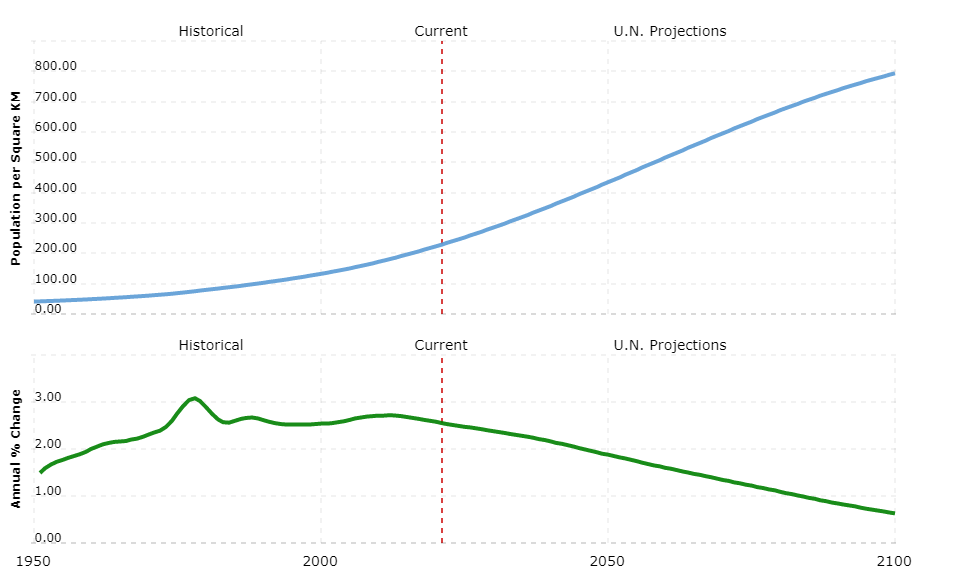 A new constitution entered into force in 1999 in the presidential Federal Republic of Nigeria. Since May 2010, President and Head of Government has been Goodluck Jonathan, who was elected by the people for four years (one-time re-election possible).

The legislature lies with the National Assembly, which consists of two chambers: the Senate has 109 seats, with each state providing three senators and the capital Abuja one senator; the members are elected for four years. The 360 ​​members of the House of Representatives also remain in office for four years.

Sharia law (Islamic law) is practiced in twelve of Nigeria’s 36 states, although it is not recognized by the national government. The legal system practiced in the other states is based on British common law.

The economy of Nigeria suffered severe losses in the years of military rule due to corruption and mismanagement. Formerly an exporter of food, the country is now dependent on imports to meet demand. Above all, the industrialization and diversification of the economy continue to be prevented by the poorly developed infrastructure, corruption, the unrest that breaks out again and again and the poor economic policy of the government. The necessary reform of the state oil sector is still pending. Two thirds of the population still live in poverty.

Almost two thirds of the population are employed in the agricultural sector, which, however, mostly represents a pure subsistence economy. Agricultural products include yams, kidney beans, cassava, cocoa and corn.

The banking sector, telecommunications, IT, construction, retail and wholesale as well as the entertainment industry are considered to be promising growth engines. However, the Nigerian economy is still largely based on the extraction and export of oil, which accounts for around 90% of export earnings. The industry, which is primarily concerned with the processing of crude oil, employs only a tenth of the Nigerian population, but generates 34% of the gross domestic product (GDP). The country also has deposits of natural gas, tin, hard coal and brown coal, gold and iron ore, some of which have not yet been mined. Nigeria’s other export goods include cocoa, palm oil, peanuts and rubber; The customers are the USA, India and Brazil. In addition to food, machines, chemical products and consumer goods imported from the United States, China and Brazil.

Currency is the naira.