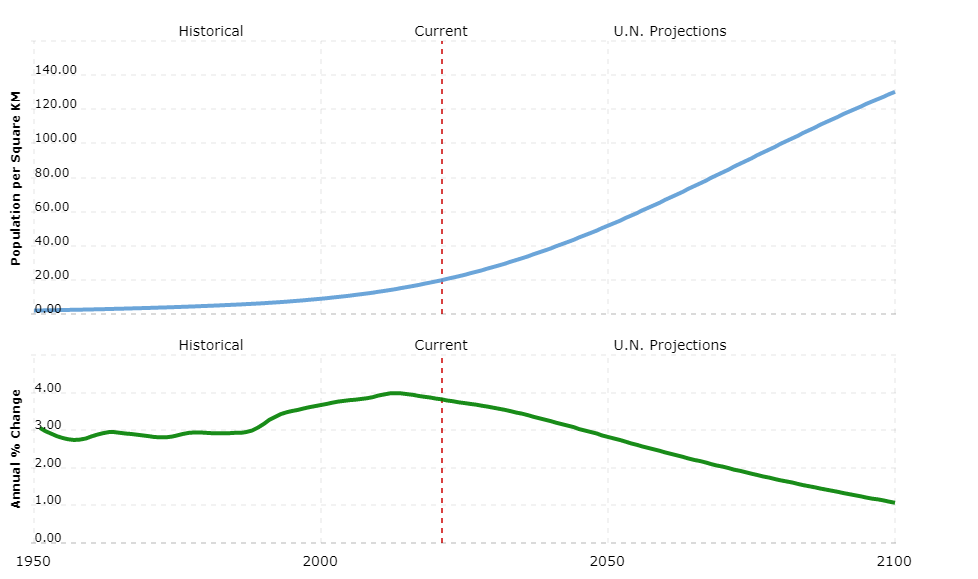 The Republic of Niger is a landlocked country in Central Africa and, with an area of ​​1,267,000 km², is the sixth largest country on the African continent (about three and a half times the size of Germany). Niger borders Algeria and Libya in the north, Chad in the east, Nigeria and Benin in the south and Mali and Burkina Faso in the west.Much of the country belongs to the Sahara or Sahel region.

In the center of Niger is the Aïr Mountains (Azbine) with peaks over 2,000 m high. Here is also the highest mountain in the country, Mont Bagzane at 2022 m. The mountains are of volcanic origin, in the valleys there are oases (Timia, If¨¦rouane). In the northwest, the mountains merge into the Algerian Ahaggar Mountains. To the west, south and east, the Aïr Mountains are surrounded by desert-like basins that lie about 300 to 400 m above sea level. The T¨¦n¨¦r¨¦ and Kaouar deserts in the east stretch to the border with Chad and occupy over 50% of the country’s territory.

The Djado plateau is located in the north of Niger on the border with Libya, the extreme northeast is occupied by the foothills of the Chadian Tibesti Mountains. The south and south-east of the country belong to the Sahel region, due to overgrazing and several droughts, the desert is spreading more and more from the north. In the southeast, the country has a share of Lake Chad, the water level of which is subject to extreme fluctuations. By draining the water for irrigating the fields, Lake Chad has shrunk to one twentieth of its area in the past 40 years (former area 25,000 km²).

Only the southwestern part of Niger can be used for agriculture (this corresponds to about three percent of the total national area). The Niger River flows through the country for a length of approx. 600 km (and is the third largest river on the African continent with a total length of approx. 4 180 km). The capital Niamey lies on its northern bank.

The climate in Niger is hot and dry. The desert regions in the north of the country average 17 °C in January and 34 °C in July. Precipitation is extremely rare here. In the south of the country the average January temperature is around 23 °C, in July 33 °C. The average rainfall is around 500 mm, there is a rainy season from June to October. The driest month is August. In the southeast in the Sahel regions, there is sometimes no rainfall for years.

In the south, dry savannah dominates with grass fields, thorny shrubs and isolated groups of trees (acacias, baobab trees). Slash-and-burn and overgrazing continue to destroy the vegetation. There is almost no vegetation in the desert areas in the north of Niger, with the exception of oases.

Specially adapted animals such as fennec (desert fox), sand mice, gazelles and reptiles live in the desert areas. In the savannah landscapes in the southern part of the country antelopes, hyenas and a variety of bird species live, in the southwest of the country in a national park among other things lions, buffalos, elephants and hippos.

A total of around 13 million people live in Niger, most of them in the fertile areas in the south-west of the country (the average population density is eleven residents per square kilometer). The largest city is the capital Niamey with around 900,000 residents. Other cities include Zinder (172,000 residents), Maradi (150,000), Tahoua (75,000) and Agadez (78,000). According to COUNTRYAAH, only about 21% of the population live in cities; 1.5 million Nigerians are nomads.

Niger is a multi-ethnic country. The largest population group are Haussa with a 55% share, followed by Songhai (with Dyerma) with around 21%, Tuareg (9%), Fulbe (9%) and Kanuri (4%). The official language is French, and around three quarters of the population use Haussa as the lingua franca. Depending on the ethnic group, other languages ​​are used. Around 95% of the population are followers of Islam (the majority of whom are Sunnis), and natural religions are also practiced.

Only a fraction of the country’s area can be used for agriculture (approx. 3%), population growth is high (approx. 2.6%) and the yields of agriculture are becoming less and less due to persistent droughts. More than 60% of the population live below the poverty line. Due to a lack of medical care, the mortality rate in infants and young children is very high (12.2%). The average life expectancy is around 42 years. Less than half of Niger’s people have access to safe drinking water. Infectious diseases are widespread, the number of people infected with the immunodeficiency disease AIDS is constantly increasing. About half of the population is younger than 15 years.

Niger is a presidential republic, the current constitution dates from 2010. The head of state is the president, elected by the people for a term of five years (Mahamadou Issoufou since April 2011), who has extensive powers. He can be re-elected once. The President appoints the Prime Minister to run the government (Brigi Rafini since April 2011).

The legislature lies with the National Assembly with 113 seats. The people are elected by the people for a term of five years.

The legal system in Niger is based on the French.

Niger is divided into eight departments including the capital district.

Niger is the second poorest country on the African continent after Sierra Leone.

Around 40% of gross domestic product (GDP) is generated in the agricultural sector. Livestock farming (horses, cattle, goats, camels, sheep) is of paramount importance. The crop yields from millet, bean, peanut, cassava, rice and cotton cultivation are low and mostly serve only for self-sufficiency. Although 90% of the population work in agriculture, this is mostly a subsistence economy and is also heavily dependent on the climatic conditions (recurring droughts). The country has long been unable to meet the food needs of the population itself.

The main export of the Republic of Niger is uranium, which generates around half of its export earnings. The industrial sector is poorly developed and focuses on the processing or production of food, textiles, building materials and chemicals. France is the most important trading partner for exports (uranium, animals, cotton, peanuts, onions), followed by Nigeria and Japan. Mainly consumer goods, machines, raw materials and food are introduced. France is the leading trading partner here too, followed by Côte d’Ivoire (Ivory Coast) and China.

Around 19,000 km of roads are available in Niger, of which around 4,000 km are paved. There is no rail network. The Niger River is navigable for approximately 300 km. There are international airports in Niamey and Agadez. In the desert areas, caravans are still of great importance for trade.