The Kingdom of the Netherlands (officially: Koninkrijk der Nederlanden) is located in Central Europe and has an area of ​​41 864 km². The country is often referred to as “Holland”, which today is only the provinces of North and South Holland, which represent the political, cultural and economic center of the country.

The Netherlands borders Germany to the east and Belgiumto the west.The West Frisian Islands (Texel, Vlieland, Terschelling, Ameland, Schiermonnikoog, Simonszand, Boschplaat, Rottumerplaat, Rottumeroog) lie in an arc off the north coast. Between the islands and the mainland is the Wadden Sea, a narrow, flat strip of salt water that continues eastwards along the German coast to Denmark.

Almost 17% of the total area of ​​the Netherlands is covered by rivers, lakes, mud flats and canals. The largest rivers are the Scheldt and the Meuse, which together with the Rhine (Rijn) form a wide delta in the southwestern province of Zeeland before they flow into the North Sea.

The state territory of the Netherlands also includes the Netherlands Antilles north of the coast of Venezuela and the Caribbean island of Aruba, the residents of which again spoke out against independence from the former colonial power in the mid-1990s.

As the country name suggests, around 40% of the country’s surface is lower than sea level. The flat land is protected from flooding by a complex system of dikes and protective walls. Coastal protection began around 1,000 years ago after the country was repeatedly threatened by storm surges. The technology, which has continued to improve over the centuries, has resulted in large parts of marshes, bogs and wide estuaries being drained and being gained as additional land, especially for agricultural use.

The coastal areas are now part of the Lower Netherlands. Due to its location below sea level, this so-called polderland, which is traversed by a network of canals and ditches, has to be artificially drained, a task that was previously carried out with the help of windmills, today by means of electrical pumping stations.

The areas in the east and south of the country just above sea level belong to the High Netherlands. In the extreme south-east, the country has a share in the Rhenish Slate Mountains, here is also the highest elevation in the country, the Vaalser Berg with 322 m.

The climate of the Netherlands is uniform across the country and is characterized by relatively cool summers with average values ​​of around 17 °C and mild, humid winters (average temperatures around 2 °C). When north winds occur, temperatures can be lower, especially in spring in the north and east of the country. The annual rainfall is around 740 mm, the rainfall is evenly distributed over the year.

Most of the few forest areas that still exist in the Netherlands have been planted, only around 8% of the country is covered. In the provinces of Utrecht and Gelderland in particular, oak and beech forests can be found in addition to coniferous forests. Original vegetation can be found in the heathlands of the dry geest areas and the bog and raised bog. On the dunes along the coast, beach grass, silver grass and thistles grow, which solidify the soil with their roots and reduce soil erosion. In the coastal area there are also plant species that are resistant to salt water. The large fields with planted flowers (especially tulips, daffodils, hyacinths), which cover large parts of the country in spring, are typical of the Dutch landscape.

The animals typical of Central Europe such as foxes, rabbits and deer can be found in the small forest areas. Otters live in the numerous waters of the polder. The animal world is diverse, especially the bird life in the Wadden Sea and on the West Frisian Islands: In addition to seals, typical waders such as the sandpiper and oystercatcher live here, and numerous seabirds such as seagulls, terns and ibis find an ideal habitat here. Parts of the West Frisian Islands have been declared nature reserves.

The population is 16.29 million. With 389 residents per square kilometer, the Netherlands is one of the most densely populated countries in the world. According to COUNTRYAAH, 40% of the population live on around 10% of the national territory in the provinces of North and South Holland: Here lies the capital Amsterdam with around 739,300 residents, The Hague with the country’s seat of government (468,500 residents), Rotterdam (596,100 residents) and Utrecht (275 900 residents). Around 4% of the population is made up of immigrants from the former colonies of Indonesia, New Guinea, Suriname and the Netherlands Antilles. There are also minorities of Turks, Germans and Moroccans and an approximately 360,000 strong group of Frisians, whose language in the province of Friesland is the official and school language in addition to Dutch. Around 60% of the population are Christians, with Catholics now predominating over Protestants, who mostly belong to the Dutch Reformed Church. Around 40% of the residents are non-denominational.

The social and health services of the state are very well developed, with a life expectancy for women of 81.5 and men of 76 years, the Netherlands is among the top in Europe. The population grows by an average of 0.5%. 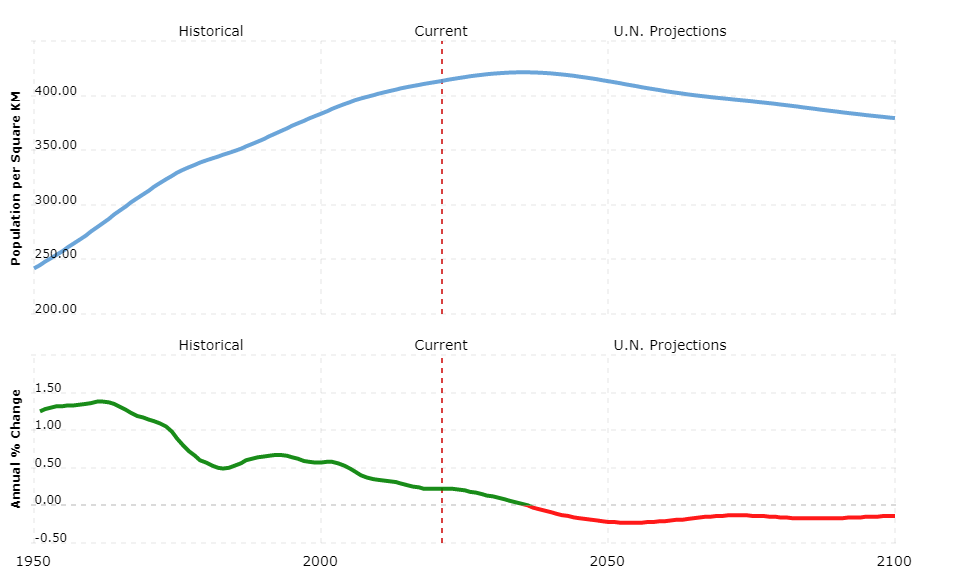 The Netherlands is a parliamentary monarchy based on a (new) constitution from 1983. The head of state is the monarch (since April 2013, King Willem-Alexander). The head of government is the Prime Minister (since 2010 Mark Rutte), who is appointed by the monarch and is usually the representative of the strongest party or coalition in parliament. The cabinet is also appointed by the king or queen.

The parliament (“Staten-General”) consists of two chambers: the first chamber (Eerste Kamer) has 75 members who are elected indirectly by the provincial parliaments for four years. In the second chamber (Tweede Kamer) the 150 members are directly elected by the people for four years. There is also a State Council with an advisory function. It has a maximum of 28 members, who are determined by the monarch. All citizens over the age of 18 are entitled to vote.

The Netherlands is divided into twelve provinces.

The Netherlands is a very prosperous country, although there are very few natural resources apart from natural gas and low oil reserves. The economy shrank by 1.0% in 2012 and unemployment was 5.3%.

Today, only 2% of all employed people work in highly technological agriculture. Around two thirds of the country’s area is used for agriculture, mainly potatoes, cereals, vegetables such as tomatoes, cucumbers and peppers and horticultural products are grown in open spaces or in large greenhouses. The tulip, figurehead of Dutch horticulture, was introduced from Asia to Holland in the 16th century. Milk and dairy products are important in agriculture, and Dutch cheese is known beyond the country’s borders. Herring, plaice, mackerel, cod and cod are among the most important catch fish, and mussels also play a role in fishing.

After the end of the Second World War, alongside traditionally strong agriculture, an efficient and diversified industrial sector developed. Almost a quarter of the gross domestic product (GDP) is generated by industrial companies. The top-selling companies belong to the food, electrical, chemical and natural gas and oil industries. Oil processing is concentrated in the Rotterdam area, only a small part of the raw material comes from our own resources. Due to the lack of own raw materials, the metal processing industry is only moderately developed, the demand is met by raw materials from overseas, which are only partially processed in their own country.

The most important trading partners of the Netherlands are above all the countries of the European Union, from which a good half of the imports come or into which almost three quarters of the exports go. Above all, machinery, chemical products, foodstuffs and petroleum are imported. In addition to agricultural products, the most important export items include means of transport, live animals, tobacco and natural gas.

The transport network is very well developed. Around 116,000 km of roads, 2,800 km of rails and around 5,000 km of navigable waterways are available for the transport of goods. Rotterdam’s major port is the largest seaport in Europe, where the petroleum super tankers can also be unloaded. Major international airports are Schiphol and Rotterdam-The Hague.