With an area of ​​147,181 km², Nepal is about twice as large as the German state of Bavaria. The country in South Asia is a narrow strip in the southern Himalayas between China in the north and India in the south. Around two thirds of the country’s surface is above 1,000 m (about 28% over 3,000 m).

From south to north, Nepal has a share in four major geographic regions: The Terai is part of the fertile lowlands, which are largely part of India. North of it, the land rises to the Siwalik chain (also: Churia chain), a promontory up to 100 km wide, which forms the southernmost part of the Himalayas and reaches heights of up to 1,800 m. Between the mountain ranges are basin landscapes such as the Kathmandu Valley, which is about 100 km long and is at an altitude of around 1,350 m. The Himalayas join to the north, here the mountains rise up to 4,000 m. This is followed by Nepal’s share of the High Himalayas, where eight of the world’s eight eight-thousanders are located, including the world’s highest mountain at 8,848 m, Mount Everest (Tibetan: Chomolungma) on the border between Nepal and Tibet.

All rivers in the Himalayas flow into the Ganges, the longest river is the Kosi (720 km in total, 350 km in Nepalese territory). The country’s capital, Kathmandu (812,000 residents in the metropolitan area), is located in the high valley of the same name.

The climate in Nepal is characterized by monsoon winds: in winter the northwest monsoon brings cool and dry air from Inner Asia, in summer the southeast monsoon brings warm and humid air masses. It is tropical hot in the Terai, the average annual temperature here is around 25 °C. The foothills are moderately warm, the temperate and cool in the Himalayas and the high mountains in the Himalayas. In the capital Kathmandu, mean values ​​of 10 °C are given for January and 24 °C in July. The annual rainfall is 1,400 mm, in the Terai further south up to 2,500 mm are measured. The main rainy season is from June to September. The snow line in the Himalayas is 5,000 to 5,800 m.

In the Terai in the south of Nepal, the original stocks of damp monsoon forests with bamboo stands and palm trees were greatly decimated. To the north, the vegetation changes into evergreen mountain and cloud forest, which has also decreased due to slash and burn and deforestation. At higher altitudes, the cloud forest is replaced by oak, maple, pine, birch and rhododendrons. The tree line is between 3,700 m and 4,200 m. Alpine mats, lichens and mosses can still be found up to a height of around 5,000 m, above which there can no longer be any vegetation in the permanent ice desert.

The forests in Nepal and the uninhabited high mountain regions still offer a habitat for many different animal species. In the high mountains there is a diverse bird life (including crested pheasant, snow vulture, rosewood troon). Musk oxen, wild sheep, cat bears (Little Panda) and snow leopards live in the mountain forests and represent an endangered species.

The population of Nepal comprises around 27.68 million people. The many ethnic groups in the country can be divided into three large groups: Around three quarters of the total population belong to the Indonesian Pales, who are descendants of immigrant Indians. The Gurkhas, who have been the leading political and social strata since the founding of the kingdom in 1768, also belong to the Indonesian Pales. The second group are the Tibetan Pales, who make up about a quarter of the population and to which most of the high mountain tribes belong. The smallest group are the Tibetan peoples, among them the Sherpas, whose share is just under 1%.

According to COUNTRYAAH, 80% of the total population are committed to the state religion, Hinduism. Around a tenth are followers of Buddhism, Muslims and Christians form small minorities.

The official language is Nep¨¢li, which belongs to the New Indo-Aryan languages ​​and is spoken by only around two thirds of the population. Other languages ​​include Maithili and Bhojpuri, and a total of over 50 regional languages ​​are spoken in Nepal.

Nepal is one of the poorest countries in the world, the standard of living is very low: a quarter of the population lives below the poverty line. State social benefits are not provided, and the healthcare system is poorly developed. The average life expectancy is 69 years for women and 65 years for men, and infant mortality is over 6.5%. In spite of compulsory schooling for six to eleven-year-olds since 1975, the literacy rate is only around 45%. The population growth is 2.2%. 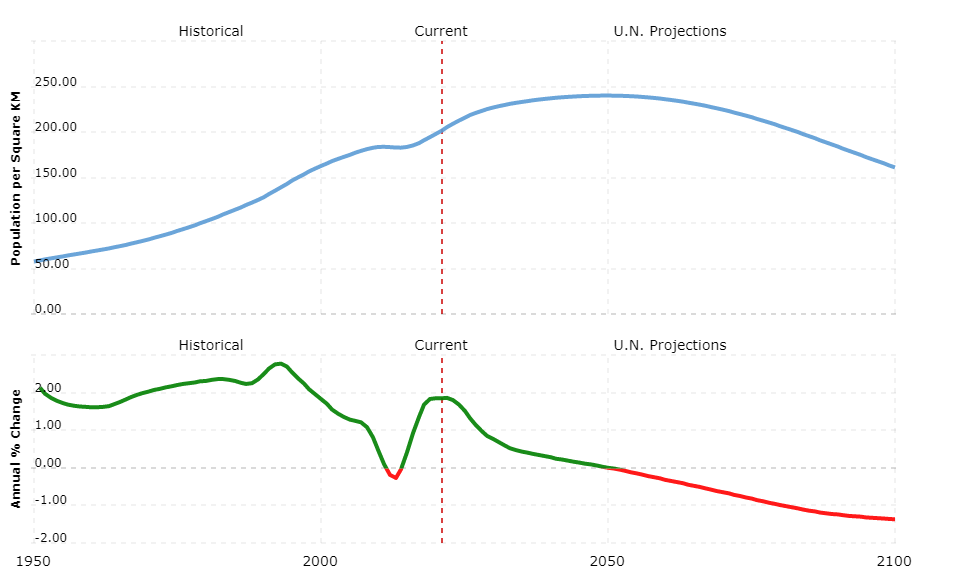 Nepal has been a Federal Democratic Republic since 2008. Your transitional constitution of 2007 establishes a parliamentary multiparty democracy.

President (with mainly representative functions) has been Ram Baran Yadav since July 2008. The Prime Minister (Sushil Koirala since February 2014) is also the commander-in-chief of the army. The executive lies with the Council of Ministers.

The Constituent Assembly also acts as a parliament. Her mandate is five years. 575 seats were allocated according to majority and proportional representation rights. There are also 26 members appointed by the President.

With a per capita income of just under $ 700, Nepal is one of the poorest countries in the world. The ten-year civil war, the high level of unemployment, the lack of trained workers and the unfavorable geographical location are all responsible for this.

Over half of the population is employed in agriculture, which contributes 36% to the gross domestic product. The most productive cultivation areas are in the Terai, in the mountain landscapes agriculture is carried out up to altitudes of around 4,000 m. Rice (also for export), buckwheat, millet, potatoes, barley, corn, wheat and jute are grown. In the mountain regions, sheep, goats and house yaks are kept, in the Terai especially water buffalos and poultry.

The industry is only moderately developed and is largely limited to the processing of agricultural products. Among other things, textiles, jute products and carpets are manufactured for export. In the inaccessible regions of the Himalayas, mineral resources are suspected, but have so far not been used. Mica, limestone, brown and hard coal are already being mined. The many small hydropower plants, which cover most of the energy requirement, serve to supply energy. Larger dam projects (such as the Pancheswar dam) are controversial due to the region’s earthquake hazard. Nepal’s most important trading partners are mainly India imports (mainly machinery, vehicles, chemical products, food are imported) and India and China for exports.

Tourism in the Kathmandu Valley, in the tropical rainforest of the Terai and in the Himalayas is an important source of foreign exchange income.

Almost two thirds of the approximately 17,000 km of road are paved and can be used all year round. The capital Kathmandu has an international airport. Mules and porters play an important role in the mountain regions.

The currency is the Nepalese rupee.