Myanmar (officially: Pyidaungsu Thamada Myanmar Naing-Ngan Daw) was called Burma until 1989, named after the largest ethnic group in the country, the Burmese. The country is located in Southeast Asia and, with an area of ​​676,578 km², is the second largest country in this region after Indonesia (almost twice as large as Germany). Myanmar borders the Indian Ocean in the south, Bangladesh and India in the west, the People’s Republic of China in the north, and Laos and Thailand in the east. See Myanmar country abbreviation.

In the south of the country, Myanmar has a share of the Malacca Peninsula through an area of ​​around 80 km (tenasserim). This part of the country is mountainous, with heights of over 2,000 m. The Mergui Archipelago with more than 800 islands lies off the coast.

In western Myanmar, mountains form a landscape boundary with the Indian subcontinent, the Patkai Mountains (Pahkaing Bum) rise to 3,800 m, the Arakan Yoma mountain range to almost 3,000 m. In the far north of the country, the Patkai Mountains merge into the outskirts of the eastern Himalayas, where the Hkakabo Razi rises, which is the highest mountain in Myanmar at 5,881 m. The karstized Shan highlands occupy the east of the country, which is on average around 1,000 m above sea level.

Between this highland in the east and the mountain ranges in the west is the fertile plain of the Irawadi Basin, which is 160 km wide and has a north-south extension of around 1 100 km. The Irawadi is the longest river in Myanmar with a length of around 2,000 km and forms a delta of around 47,000 km² at its mouth in the Indian Ocean in the south. Myanmar’s capital, Yangon (Rangoon), is located in the southern part of the country.

The climate in Myanmar is tropical and is determined by the monsoon winds. Between November and February, the northwest monsoon brings in dry air masses from Inner Asia, the average temperatures in the country are between 20 °C and 25 °C. The months of March and April form a transition period with little rainfall, but significantly increasing temperatures (30 °C). Between May and October, the southwest monsoon leads to large amounts of precipitation (up to 5,000 mm in the Arakan Mountains) and very high air humidity, although the amount of precipitation varies greatly from region to region. In the interior it is significantly lower (400 to 10,000 mm), in the eastern part of the country (Shan highlands) it is approx. 1,500 to 2,000 mm. The national average temperature in the rainy season is around 30 °C. At the end of the rainy season,

Over 50% of Myanmar’s land area is forested. Evergreen rainforests cover large parts of the mountains in the west of the country, in addition to teak trees, mainly bamboo grows. In the highlands of Shan in the east of the country and in the north there are mainly pines and oaks. In the Irawadi Basin in the central part of the country, dry forest and thorn bush savannah predominate.

The dense forests offer a suitable habitat for numerous animal species, some of which are considered to be endangered (eg large-spotted civet). Larger mammals include panthers, bears, wild water buffalos, rhinoceroses and various types of monkeys, such as crested flangur and pig monkey. There are also cat bears (little panda), linsang and tapirs (saddleback tapir). Numerous crocodiles live in the mangrove areas on the coast.

Around 49.91 million people live in Myanmar, the majority of them in the central lowlands, just over a quarter in the cities. The only metropolis with millions is the capital Yangon (Rangoon) with around 4.47 million residents, the next largest cities are Mandalay with around 900,000 and Moulmein (Mawlamyine) with over 220,000 residents.

Around 70 different ethnic groups live in Myanmar. The largest group with a share of around 68% are the Burmese, who are related to the Tibetans. The next largest group are the Shan with around 9%, which belong to the Thai peoples and mainly inhabit the northeast and east of the country. Other ethnic groups are the Karen (7%), who mainly live in the border areas with Thailand and have been seeking autonomy for their territories for decades, Rakhine (Rohingya), Mon and Kachin.

According to COUNTRYAAH, around 89% of the population belong to Buddhism (especially Burmese), among the Karen there is a significant minority of Christians. Rakhine is one of the 4% Muslims in the country, while the residents of the northern mountain regions are mostly followers of natural religions.

The official language is Burmese, English is important as a commercial language. The estimated literacy rate, at around 85%, is considered high compared to other developing countries, and the many Buddhist monastery schools enable the followers of this religion to receive basic training. However, the political situation means that the universities are only partially open and parts of the educated population have left the country. Due to the protracted civil war in Myanmar, the formerly very well-trained health system, particularly in rural areas, is still inadequate: many children are malnourished, infant mortality is 7%, and the average life expectancy is 62 years. The population therefore only grows by 0.9% per year. 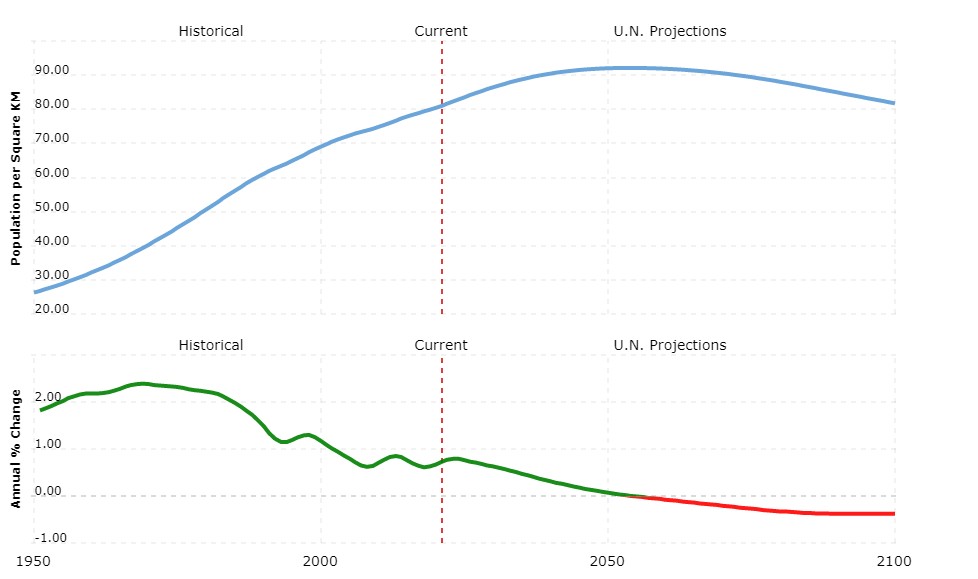 Myanmar is a presidential republic with military influence according to the 2008 constitution. The President (Thein Sein, since March 2011) is the head of state and government and is elected by parliament every five years.

Myanmar was one of the wealthiest Asian countries until the early 1960s. However, the economy suffered severe slumps due to the socialist planned economy. The first measures towards a free market economy were taken at the end of the 1980s, such as the re-privatization of state-owned companies. The government has initiated extensive economic reforms since 2011.

The annual per capita income is only around $ 900. The reasons for this are the cumbersome and corrupt administrative apparatus and the outdated infrastructure. In addition, the marked black trade in drugs, precious wood and precious stones is weakening the Myanmar economy.

Agriculture remains the most important sector of the economy, contributing 35% of gross domestic product. Many of the companies are organized as cooperatives. Rice, sugar cane, legumes and millet are mainly grown to meet the food needs of the population. In addition to rice as an important export product (Burma was the world’s largest travel exporter until 1945), peanuts, jute and cotton are grown for export. Poppy is also cultivated in Myanmar, the raw material for opium and heroin. The focus is on the so-called golden triangle in the border area with Laos and Thailand. The export of teak is important in forestry. Cattle breeding is practically irrelevant due to the prevailing belief (Buddhism).

Myanmar is a resource-rich country (ores and petroleum, lead and zinc, gemstones such as sapphires, rubies, jade), but so far only a part of the natural resources has been mined. Rich natural gas deposits are the main source of economic growth. Around 10% of the workforce is employed in the poorly developed industrial sector. Food and textile industry are predominant, in the area of ​​the capital Yangon (Rangon) there is also chemical or petrochemical industry. Revenues from the tourism sector are increasing, but still play a subordinate role.

The currency is the kyat.