The United Mexican States lie between the Gulf of Mexico in the east (Atlantic) and the Pacific Ocean in the west. The country borders the United States of America in the north, Belize in the southeast and Guatemala in the south. With an area of ​​around 1,959,000 km², Mexico is more than five times the size of Germany and the third largest country in Latin America after Brazil and Argentina. The state territory also includes the island of Guadaloupe and the Revillagigedo Islands in the eastern Pacific.

Much of the country’s geological area belongs to North America. The North American Cordilleras Belt, which runs through the western part of the USA, continues in the Mexican highlands, more than half of the country’s total area is above 1,500 m. The highlands are surrounded by high outcrops that drop steeply to the east of the Gulf of Mexico and west to the Pacific. From the border with the United States in the north, the country rises from around 900 m to over 2,300 m near the capital Mexico City. The outlying mountains sometimes reach heights of over 4,000 m: In the east of the highland plateau, the Sierra Madre Oriental rises, which is the continuation of the North American Rocky Mountains and branches into numerous mountain ranges, in the west, the Sierra Madre Occidental rises.

In the south, the highland plateau is delimited by the Cordillera Volc¨¢nica, a chain of volcanoes that are still active in an east-west direction. In this area are also the highest peaks in Mexico, the Pico de Orizaba (or Citlalt¨¦petl) with 5 700 m, the still active Popocat¨¦petl with 5 452 m and the Iztacc¨ªhuatl with 5 286 m.

To the south of the volcanic chain – separated by the valley of the R¨ªo Balsas – is the Sierra Madre del Sur, which extends approximately 1,200 km parallel to the Pacific coast and reaches heights of up to 3,700 m. In the east, the isthmus of Tehuantepec is the narrowest part of the country (with a north-south extension of around 216 km). To the southeast of the isthmus is the Chiapas highlands (up to 4,000 m), to the east of the isthmus the Tabasco lowlands and the flat, karstified Yucat¨¢n peninsula, most of which belongs to Mexico.

One of the few major rivers in Mexico is the Ri¨® Bravo del Norte, which forms the border with the United States for more than 1,994 km (here the Rio Grande river) before it flows into the Gulf of Mexico. The capital Mexico City (Ciudad de Mexico) is located inland at an altitude of around 2,300 m.

Due to the large north-south extension of the country, the climate in northern Mexico is subtropical with greater temperature fluctuations, and tropical south of the northern tropic. There are also great climatic differences due to the height differences. The northern parts of the country have hot, dry summers and mild winter temperatures. In the south it is hot and humid all year round, the temperature differences are only slight all year round. Acapulco on the south-west coast averages 26 °C in January and 29 °C in July. In Mexico City, which is located at around 2,300 m inland, the temperature is around 12 °C in January and 19 °C in July. Four climatic zones can be distinguished, particularly in the southern highlands:

The driest areas in Mexico are the steppe and desert areas on the border with the United States, where measurements are sometimes less than 100 mm. The Lower California peninsula is also extremely dry under the influence of the cold California current. The average values ​​on the Pacific coast are between 800 and 1,000 mm, while on the Atlantic coast they are significantly higher at around 1,500 mm. Most of the rain falls on the east side of the Sierra Madre Oriental with up to 4,000 mm and the highlands of Chiapas (2,500 mm). An average of 750 mm is measured in Mexico City.

The rich flora and fauna of Mexico contain both North and South American species. Although the tree population has already been decimated by humans, there are still large forest areas. On the rainy slopes of the Cordillera, there is rain or cloud forest, which in the higher elevations changes into mixed forests (pine, oak, juniper) and then into coniferous forests. The tree line is around 4,000 m. In the north of Mexico in the dry areas there is thorn bush vegetation and countless types of cactus, one of the largest is the so-called candelabra cactus, which can grow up to 15 m high. Agaves, yucca palms and so-called mesquite plants are also typical of this zone. The lowlands of Tabasco in the south of the country have large swamps and tropical wet forests,

Mexico’s wildlife is also very diverse, especially among reptiles and birds. Larger mammals include bears, lynxes, prairie wolves, deer as well as jaguars, ocelots, tapirs, armadillos and various types of monkeys, although these often only occur in designated protected areas or inaccessible areas. In addition to alligators and turtles, there are numerous snake, newt and lizard species in the swamps and lagoons. The different bird species are particularly numerous in the tropical rainforests (parrots, hummingbirds), on the coast there are flamingos, herons and pelicans, among others.

Around 106.21 million people live in the United Mexican States. Today around three quarters of people live in cities or their immediate surroundings. Mexico City alone counts 22.1 million people (metropolitan area); other major cities are Guadalajara with around 1.74 million and Ecatepec with 1.77 million (each in the urban area).

According to COUNTRYAAH, 75% of the Mexican population consists of mestizos, i.e. descendants of Indians and whites. The proportion of Indians is declining and is around 14%. The largest groups among the Indians are the Nahua, Otom¨ª and Rarasken in the central highlands, Totonaken and Huaxteken on the Gulf Coast, Maya on the Yucat¨¢n peninsula and Zapoteken and Mazateken in the southern highlands of Chiapas. There are a total of over 40 indio groups. Around 9% of the total population are whites, almost all of whom are of old Spanish origin (creoles). The national language is Spanish and is spoken by the majority of the population. In addition, around 40 indigenous languages ​​are still used. Around 90% of the population belong to the Catholic Church, Protestants have a share of 6%.

School attendance is compulsory for children between the ages of six and 14, and state schools are free. Nevertheless, only 92% of Mexicans can read and write, as elementary school is often not completed, especially in rural areas. The literacy rate among Indians is 60%.

In principle, the social and health care system is well developed, but in rural areas and in the rapidly growing slums of the big cities, medical care, in particular, is often inadequate. The average life expectancy is 75 years. The population grows by an average of 1.2%, which rate is also due to the migration to the north, especially to the USA. 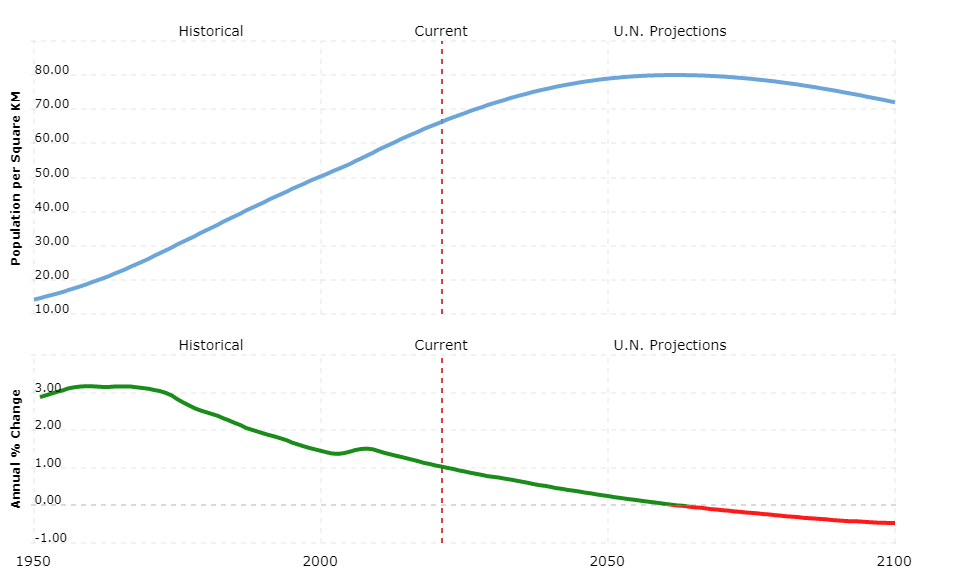 In the Federal Republic of the United Mexican States there is a presidential system based on the 1917 constitution (which has since been amended or supplemented several times). The head of state and head of the government is the President (Enrique Peña Nieto since December 2012). He is elected by the people for a term of six years and appoints the members of the government. The legislature lies with the National Congress (Congreso de la Union), which consists of two chambers. The 128 senators represent the individual states, the candidates are elected for a term of six years, some directly, some via party lists. The House of Representatives has 500 seats, 300 members are elected directly by the people, 200 through party lists for three years. Bills require the approval of both chambers.

Mexico consists of 31 states (Estados) and a federal district with the capital Mexico City. The states have a certain degree of internal autonomy and their own constitutions, which are based on the federal constitution. The legal system is based on Spanish and French models.

Mexico is one of the most important economies in Latin America and one of the most industrialized countries in the region. The exporting country has oil and gas reserves and extensive other mineral resources. However, wealth is distributed very unevenly within the population; around 45% of Mexicans still live below the poverty line. Economic growth was 3.9% in 2012, unemployment was 5.2%, but there is high underemployment. Mexico’s economy has been heavily deregulated and privatized since the 1990s. Nevertheless, there are still numerous oligopolies and monopolies that hinder competition and cause high costs for the economy.

Agriculture contributes about 4% to the gross domestic product, 13% of all employed people are employed here. The haciendas of large landowners are important for the export industry, while many Mexicans cultivate food for their own needs as part of the subsistence economy. The large-scale haciendas are usually located in areas where good irrigation allows intensive land use. Cotton, tobacco, coffee, vegetables and fruit are mainly grown here. Smaller farms in the central highlands mainly cultivate corn, beans, rice and vegetables for their own use. Forestry plays a subordinate role, cattle farming is also mostly done on haciendas.

The service sector contributes around 62% to the gross domestic product, 61% of the workforce is employed here. Tourism is also an important economic factor.

Mexico has an abundance of natural resources, and the conquistadors mined silver and gold. Today, the focus is on oil and natural gas; according to findings in the 1990s, Mexico is among the ten countries in the world with the largest oil reserves. Since 1938, the promotion and marketing has been in state hands (PEMEX). In addition to covering its own energy requirements (around three quarters with fossil fuels), oil is an important export good. The main areas of support are in the Gulf of Mexico and the Gulf of Campeche. Other natural resources play a subordinate role for the Mexican economy, even though the country is one of the largest silver producers in the world; gold, copper, zinc, iron, lead, manganese and bismuth are also mined.

Industry generates around 34% of GDP; the most important areas are the food and petrochemical industries, further electrical engineering and electronics. Four-fifths of exports (electrical machinery and materials, vehicles, mineral fuels, mechanical apparatus and parts) are delivered to the USA; Most of the imports (machinery and electronic equipment, vehicles and vehicle parts) also come from the United States. Mexico has free trade agreements with 45 countries worldwide.

The country’s infrastructure is well developed. Around 330,000 km of road and 19,500 km of rail are available. Both the Gulf of Mexico and the Pacific coast are several large seaports (e.g. Veracruz, Salina Cruz). There are around 40 international airports in the country.

The currency is the Mexican peso (= 100 centavos).