The Islamic Republic of Mauritania (French Mauritania, officially Arabic Al-Djumhuriyya al-Islamiyya al-Mawritaniyya) is located in West Africa and has an area of ​​1,030,700 km². This makes the country almost three times the size of Germany. With a coastline of 754 km, Mauritania borders the Atlantic Ocean in the west.The Republic has immediate borders with four countries: Western Sahara in the northwest, Algeria in the northeast, Mali in the east and southeast and Senegal in the south. See Mauritania country abbreviation.

About two thirds of the country’s area is occupied by deserts. In the Sahara desert, rubble deserts (Hamitian “Reg”) and sand deserts, which also have hiking dunes north of the 18th latitude, can be distinguished. The Sahel follows in the south. From the large dune areas and a basin landscape in the central east, large plateaus join to the west, which drop steeply to the coastal plain. The highest peak in Mauritania is the Kedia Idjil with a height of 915 m, which lies on the border with Western Sahara.

The only significant river in the country is the Senegal, which also forms the border with the southern neighboring country of Senegal. In Mali, Senegal arises from the union of the Bafing and Bakoy rivers and flows into the Atlantic at Saint-Louis. Together with one of the two source rivers, the Bafing, which originates in Guinea, it is 1,430 km long and navigable inland from the Senegalese Podor all year round. The fertile alluvial regions of the country are located along its course. The rest of the country is characterized by deeply incised wadis that run through the plateaus. The rare rains that are drained off via the wadis collect in a few lakes, whereas in the wastes in the north and east there is too little rain to form such water points.

The country has a dry desert climate in most regions. An exception is the coastal south, where winds blowing from the Gulf of Guinea cause rainfall of up to 300 mm per year. In the coastal region, too, the temperatures are slightly lower than inland due to the cooler water areas and the Canary Islands current. In Nouakchott, the capital by the sea, they average 28 °C in July and 21 °C in January. In winter, there is often an uncomfortable dry-hot desert wind from the northeast, the Harmattan, for weeks.

The vegetation of Mauritania is most fertile in the flood savannas along the course of Senegal and along the coasts. The grassy savannah on the river has wine palms, baobab trees and dump palms. The pulp of the globular drupes of the dump palm is edible. To the north, the vegetation in the interior changes into a narrow intermediate zone, the Sahel zone. Sahel (Arabic for bank) marks the southern border areas of the Sahara desert. The low rainfall allows only very sparse vegetation, which consists of a few low trees, acacias and other heat-resistant bush species. Thorn shrub savannah follows further north, then the sand and rubble deserts of the Sahara begin. In the deserts there are oases in which date palms grow, among other things.

The savannah regions of Mauritania are inhabited by antelopes and lions. There are also free-living elephants in the southern part of the country, which have adapted to the desert-like conditions. But gazelles, panthers, hyenas, warthogs and lynxes also live in the south. Crocodiles are at home in the few waterholes.

Mauritania has around 3.09 million residents and is therefore very sparsely populated. The largest city is the capital, Nouakchott on the Atlantic coast with around 750,000 residents. According to COUNTRYAAH, more than 75% of the population live in the Senegal river valley, about a quarter are nomads. The Mauritanian population is divided into light and dark-skinned Moors and blacks; each of these three groups has approximately the same share in the people of the desert state. The Moors mostly speak an Arabic dialect called Hassania, which derives most of its grammar from Arabic and draws its vocabulary in equal parts from Arabic and Berber vocabulary. The written language Arabic is only spoken by a small part of the people; almost 60% of the total population are illiterate.The rest of the population is divided into Wolof (on the coast in the southwest), Tukulor (in the Senegal river valley), Soninke (in the extreme south), Fulani (spread all over the south) and other smaller groups. Fulani and Tukulor speak Fulfulde, a Fulbed dialect, the other ethnic groups have their own languages. The national languages ​​are Arabic, Pular, Soninke and Wolof, but the working language is mostly French. Except for a very small minority, which consists mainly of French and Spaniards, the entire population is Muslim.

As in most African countries, the population growth rate is high (2.9%); every woman gives birth to an average of six children. The high infant mortality rate of 7% is due to the numerous, widespread infectious diseases such as hepatitis, malaria and meningitis. Accordingly, life expectancy in Mauritania is only 54 years. 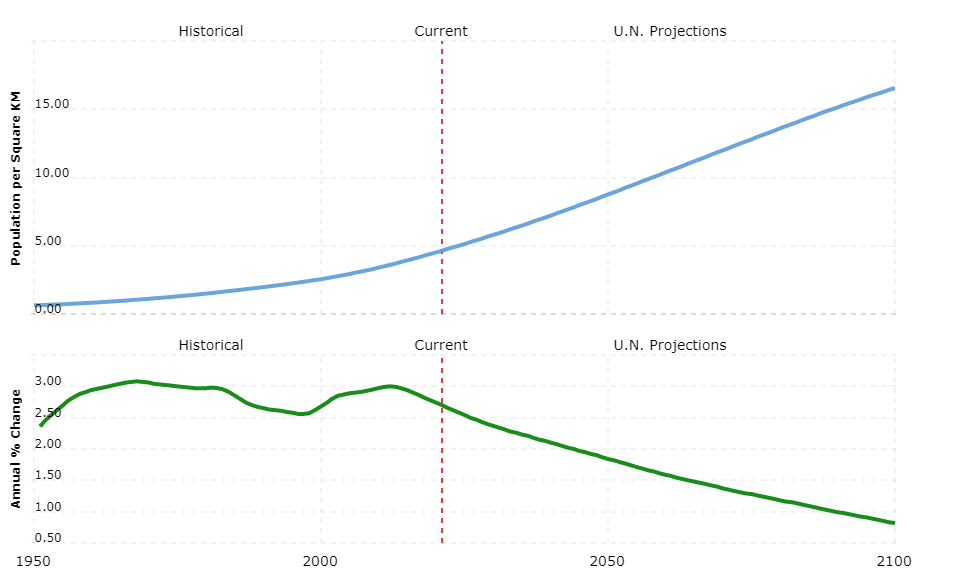 According to the 2006 constitution, Mauritania is an Islamic presidential republic. The President (since August 2009 Mohamed Ould Abdel Aziz) is the sole bearer of executive power: he appoints the government (Prime Minister Moulaye Ould Mohamed Laghdhaf since August 2008) and can dismiss it at any time. The president has a five-year term, re-election is possible.

The Parliament consists of two chambers: the National Assembly and the Senate. The National Assembly (Majlis al-Watani) has 95 members who are elected by general election for five years. The Senate (Majlis al-Shuyukh) has 56 senators, 53 of whom are elected indirectly in the administrative districts of local councils. A senator represents Mauritanians in the Arab world, and one senator represents Mauritanians who live in sub-Saharan Africa and the rest of the world. One third of the Senate is elected every six years, every two years.

Mauritania is one of the poorest countries in the world. 42% of the population live below the poverty line.

About half of the Mauritanians live in the traditional peasant way of life. In the region on the Senegal river as settled farmers, in the north as nomadic cattle breeders, the Mauritanians primarily produce goods for their own use, whereby grain must also be imported. Sheep and goats are mainly bred in the north, camels also in the center of the country, especially in the Adrar region. The farmers grow rice, millet, corn, potatoes, peanuts and vegetables, especially in the flooded area of Senegal. Date palms are grown and gum arabic extracted in the oases. An important part of the domestic economy is fishing, which has rich fishing grounds in the 200 nautical mile zone. 16% of the gross domestic product (GDP) is generated in agriculture.

50% of GDP comes from the industrial sector. Food and iron ore processing companies dominate here. The mining of iron ore – here, Mauritania is the third largest African producer – is of particular importance since its sale accounts for 50% of export earnings. The known oil deposits have not yet been developed. The most important imports are food, industrial and consumer goods as well as machines and vehicles. After independence, the most important trading partner in imports is France, followed by the USA and China. Fish and fishery products as well as iron ore are exported. Exports now flow mainly to Japan.

The main coastal ports are Nouadhibou near the border with Western Sahara and Nouakchott in the south of the country. International airports are located in Nouakchott, Nouadhibou and Atar. The infrastructure is little developed; Of the 8,100 kilometers of road, just under 1,700 are paved.

The currency is the Mauritanian Ouguiya (= 5 Khoums).