In the health care sector, Mali has a number of worrying indicators. Inadequate access to health facilities, poverty, a lack of sanitary facilities, widespread undernourishment and malnutrition as well as insufficient clean drinking water are often closely related problems, which result in an increased susceptibility of large parts of the population to serious diseases (e.g. malaria, serious diarrheal diseases). In the cities in particular, as a result of changes in eating habits and lifestyles, diabetes has become an increasingly widespread disease.

Cholera epidemics were reported from various parts of the country between 2011 and 2013.

According to usaers, Mali is a country located in Western Africa. Mali has also been affected by the COVID-19 pandemic since March 2020. In an international comparison, the country’s health system is very inadequately equipped to contain the respiratory disease COVID-19 and to treat people who are ill with it. The current number of people suffering from COVID-19 in Mali can be found on a website of the World Health Organization. The measures taken by the government to contain COVID-19 (including the temporary closure of all schools and a temporary night curfew) and the socio-economic consequences of the COVID-19 crisis have contributed to a further increase in social and political tensions in the country. 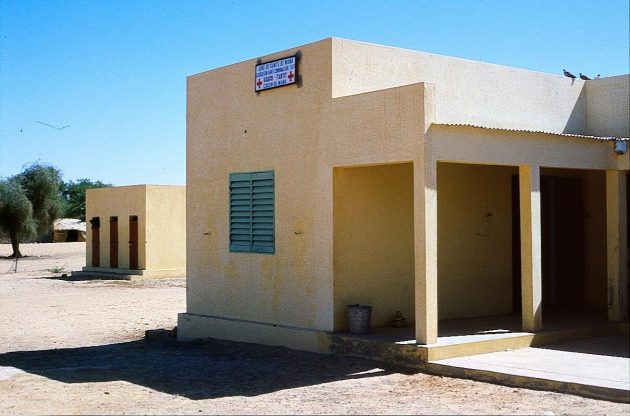 CSCOM in the Timbuktu region

Since the outbreak of the Ebola epidemic in Guinea in early 2014, fear of the epidemic spreading has also increased in Mali. After the death of the first Ebola patient at the end of 2014, extensive preventive measures were started in the country. At the beginning of 2015, Mali’s health minister declared the country Ebola-free.

Malaria remains the most common fatal disease. The Malian government is becoming increasingly involved in the fight against malaria. Children up to the age of five and pregnant women have the option of free malaria prevention. The use of impregnated mosquito nets, which are supposed to help reduce the risk of infection, as well as research into new methods of combating malaria is also promoted. In contrast, tests with anti-malarial vaccines have not proven successful. Progress made in the fight against malaria in neighboring Senegal could potentially also be of interest to the Malian health system.

Mali receives support in the fight against malaria, tuberculosis and AIDS from the Global Fund, among others. However, it appears that some of the support provided within this framework was misappropriated, which was clearly condemned by key donor countries and led to a partial suspension of support.

Increased attention is also being paid to promoting modern family planning, which so far has only been practiced by a small minority.

The sale of counterfeit medicines poses a significant problem. Traditional medicines and methods and the use of medicinal plants are of great importance.

An important core element of the national health policy was the PRODESS, a national development program aimed at improving the health system. As part of the decentralization of the health system, the CSCOM was founded as a new institution for basic health care. Numerous new CSCOMs have been built in the past fifteen years, particularly in rural areas. The CSCOM are health centers that are operated by user groups and are mainly active in the following areas: vaccinations against the most important infectious diseases, first aid care, childbirth and the fight against child mortality. Mali has one of the highest child mortality rates worldwide (2018: 98 deaths per 1000 live births; e.g. Niger 84, Burkina Faso 76, Senegal 44). The relevant Millennium Development Goal (2015: 86 deaths per 1000 live births) was far from being achieved by the country. The maternal mortality rate is also very high (2015: 587 deaths per 100,000 live births).

Closer cooperation between local authorities and CSCOM is sought. Health centers with a cross-border catchment area are a rare exception.

A significant part of the state health budget is spent on wages, administration, transport costs, training and further education measures and specialized further treatment. Primary health care and health education programs, on the other hand, are largely donor-funded. So far, hospitals have largely only existed in the larger cities.

In Bamako in particular, there is a rapidly increasing number of private medical practices and clinics, the services of which, however, are in many cases the subject of a controversial debate.

AIDS is a serious problem in Mali. In the country, 110,000 people were HIV-positive in 2016, although the proportion in Bamako and in risk groups (for example prostitutes) was considerably higher. In addition, the female population has a higher infection rate than the male population.

The state health service, parts of the media and the private sector, as well as numerous NGOs have started to react to the AIDS problem with a variety of information campaigns and preventive measures. Access to treatment options has so far been extremely limited.

The harmful traditional practice of female genital mutilation (FGM) is widespread in Mali in almost all ethnic groups. Nationwide, 89% of all women between the ages of 15 and 49 are circumcised. Only among the Songhay and Tuareg are only a small percentage of girls and women circumcised. The advocacy against FGM since 2002 part of the Malian health and population policy and an important part of development cooperation. Demands for a legal ban on the various forms of FGM have been made for a long time, but cannot yet be socially and politically enforced. Appear more successful, howeverInformation and awareness-raising activities such as theatrical performances and radio broadcasts. Background information on the spread and practices of female genital mutilation as well as approaches to its prevention can be found on the GIZ and INTACT websites, for example.

It is questionable whether Koran scholars in Mali will also issue a fatwa against female genital mutilation, as happened in Mauritania in 2010.