Only 5.5% of the land area (value for 2014) is used for arable farming, another 25% can be used as pasture land. The country’s cultivation centers are in the southern parts of the country and along the Niger. In the south, cereals (millet, sorghum, maize), cotton and peanuts are mainly grown.

Rice is primarily grown along the Niger. The irrigation areas have been continuously expanded for two decades. The irrigation area of the Office du Niger in the Ségou region is of particular importance in this context. It is the largest irrigation area in West Africa, in which, in addition to rice, sugar cane and vegetables are grown, and in which wheat and oil fruits (e.g. sunflowers) are to be grown increasingly in the future. Corruption allegations are regularly raised against the state authority of the same name that operates the irrigation area.

The expansion of irrigation is one of the priorities of Mali’s agricultural policy. In this context, the government attaches great importance to the Taoussa dam project on the Niger in the Gao region, which began in 2010. Numerous donors are involved in the financing of this not undisputed major project. The realization of the Taoussa project is being called into question by the recent North Mali conflict. The government is increasingly promoting major foreign investments in irrigated agriculture.

The fact that both Mali and other neighboring countries are planning and building new dams along the Niger and its tributaries increases the risk of overuse of water resources. At the same time, she underlines the need for better cross-border coordination with regard to the future use of Niger water and the analysis of the effects of dam construction. In this context, reference is made to a pilot project carried out with Dutch support. With regard to the use of the water resources of Senegal, an increased cooperation between the neighboring countries is sought, which in view of the current and planned The construction of further dams appears sensible and necessary.

In Central Mali, extensive livestock husbandry (cattle, sheep, goats) and millet farming dominate, mainly operated by the Fulbe, which is supplemented by irrigated vegetable cultivation, especially in the Dogon Country and in the Office du Niger. In the Niger Inland Delta, fishing, which is particularly carried out by the Bozo, is of great importance. The further north you go, the greater the risk that, due to poorly distributed rainfall, the critical period between the depletion of the old harvest supplies and the bringing in of the new grain harvest will be postponed, which can significantly increase seasonal migration from the country. 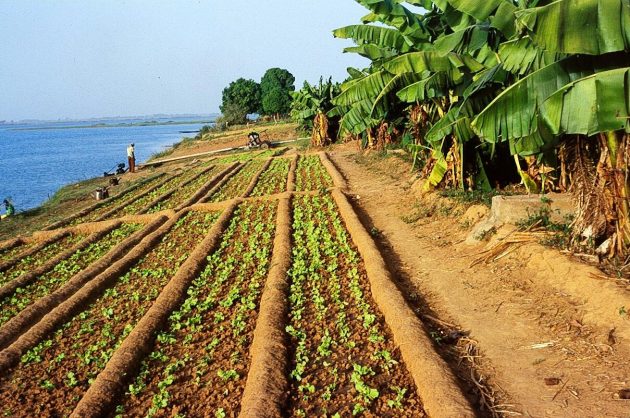 Irrigation cultivation on the Niger in the Segou region

In northern Mali Due to the aridity, high-yield and safe cultivation is only possible with irrigation and extensive livestock farming (dromedaries, goats and sheep). 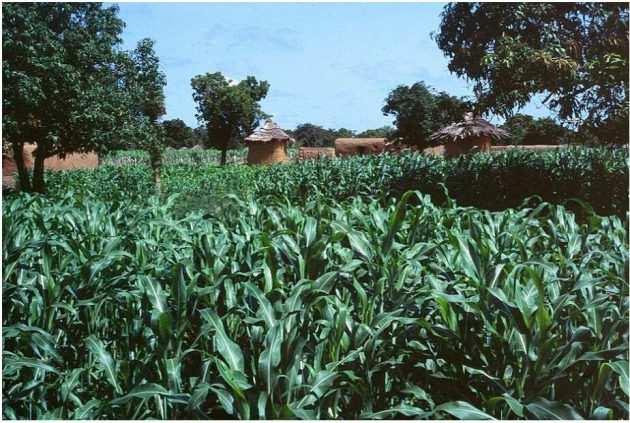 Rain farming in the Sikasso region

The causes of recurring food crises are often of a complex nature. After a locust invasion and an unfavorable rainy season, supplying the population with staple foods turned out to be extremely difficult for the first time in a long time. According to official information, more than a million people were threatened with hunger and had to rely on food aid for at least a few months the northern parts of the country were hardest hit. Also due to the good rainy seasons, above-average grain harvests could be brought in in the following years, which brought about a temporary relaxation of the food situation, although in some areas considerable crop damage was to be lamented from floods.

Grain production has increased significantly over the past decade. In the period from 2004 to 2008, the average annual grain production was 3.7 million t, while in the period from 2009 to 2013 an average of 6.2 million t of grain was harvested. As a result of good harvests in 2009 and 2010 (2009: grain surplus of approx. 1 million t), Mali temporarily developed into a regionally important grain exporter.

In 2011, the government’s target of a production of 8.9 million t of grain was missed by a long way due to the unfavorable course of the rainy season, and production was only 5.8 million t. Although a grain surplus of around 500,000 t was estimated for the entire country at the beginning of 2012, the high crop losses in parts of western and central Mali threatened a serious food crisis that threatened around 1.7 million people. The supply situation was made more difficult by the increased demand for grain from border regions in Mauritania and Niger, where the grain harvest was poor.

An emergency aid program was passed by the government, which included the purchase and free distribution of 46,000 tons of grain in particularly affected areas. She also asked the international community for support at an early stage. However, management of the food crisis has been severely hampered by the drastic deterioration in the security situation in northern Mali. 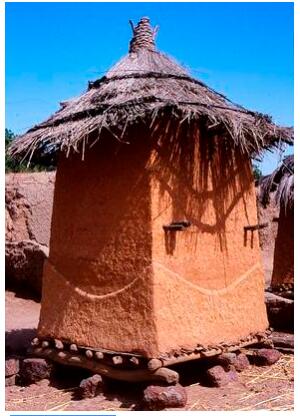 In 2012, due to the favorable course of the rainy season, a very good grain harvest of 6.6 million tons was brought in, which contributed to a significant improvement in the food situation in most parts of the country. The same applied to the neighboring countries Niger and Burkina Faso.

For 2013 the government pursued the ambitious goal of a further substantial increase in production to a total of 7.5 million tons of grain. However, late grain sowing has been observed in many places, as the rainy season started late. Overall, the harvest in 2013 was assessed as average to good, with 5.7 million t of grain being harvested and the country achieving a grain surplus of almost 900,000 t.

The harvest brought in in 2014 represented a very good harvest with 7.0 million t of grain, which made it possible to achieve a grain surplus of 1.7 million t. For 2015 the government was aiming for a grain production of 8.0 million tons. In many places, however, the delayed onset of the rainy season caused concern with regard to the summer cultivation campaign. The unusually long persistence of rain until October 2015, however, had a very positive effect on the grain harvest, which amounted to 8.0 million tons and enabled a grain surplus of 1.6 million tons.

In 2016, Mali achieved another very good harvest with 8.9 million t of grain, which enabled a grain surplus of 3.7 million t. With a very high grain harvest of 9.3 million t and a grain surplus of 4.1 million t (of which 580,000 t was rice), Mali consolidated its position as an important regional grain exporter in 2017. In various areas, however, the harvest was unfavorable due to flooding or irregular rainfall at the end of the rainy season. A very good harvest was brought in in 2018 with 10.4 million t of grain. With 10.5 million t. Grain was a bumper crop in 2019 achieved a grain surplus of 4.5 million t. made possible. However, many poor households do not have enough purchasing power to buy or buy grain, so that the problem of malnutrition persists despite high grain harvests. 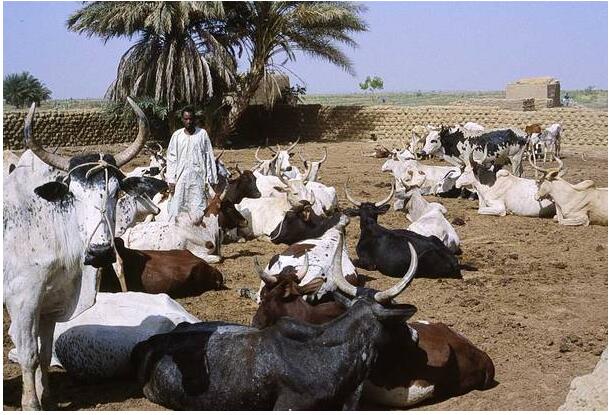 Cattle from Mali are mainly exported to neighboring countries

Despite the good to very good harvests across the country, the food situation in parts of northern and central Mali was strained between 2013 and 2019 as a result of the armed conflict and the closure of the Algerian border. According to estimates by OCHA, 3.2 million Malians were affected by food insecurity at the beginning of 2019. It is feared that due to the tense security situation in some major growing areas of Central Mali, the rural population only part of the field order is. This could have serious consequences for food security.

The Riz initiative has made a significant contribution to increasing grain production in the medium term. This is a government subsidy program for rice cultivation that started in 2008 and has also received considerable support from donors. As part of the program, with which the government responded to developments on the world grain markets and rising consumer prices, the use of artificial fertilizers is primarily subsidized. Critics particularly criticized a one-sided preference for rice cultivation and feared increasing speculation. In view of the high rice prices, the government decided on several occasions to make temporary imports easier, but these were the subject of a controversial debate. The use of artificial fertilizers for cotton, maize and wheat cultivation is also subsidized. 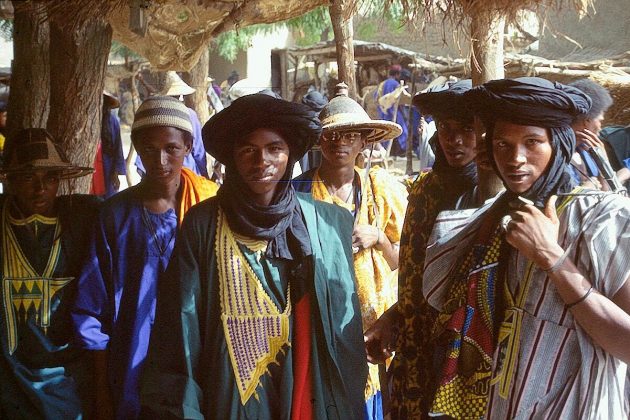