The Maldives, a chain of 19 island groups, lie southwest of India and Sri Lanka in the Indian Ocean. The 19 atolls form around 2,000 coral islands, around 200 of which are inhabited.

Among the most densely populated islands were the Male Atoll with the capital of the same name on the southeast coast, further the Suvadiva Atoll and the Tuladummati Atoll. None of the islands in the Maldives is larger than 15 km², about 80% of the country’s area (298 km² in total) are less than 1.5 m above sea level.

Male is the economic and administrative center of the Maldives. The island, which is only 2.7 km² in size, is overpopulated with around 105,000 residents. The eye-catcher is the golden dome of the Islamic Center with its mosque and minaret.

The climate is tropical and humid. The average annual temperature is 30 °C without major fluctuations. The annual rainfall is approximately 1 900 mm, the southwest monsoon from mid-April to the end of September brings the main rainfall.

Despite the approximately 250 different species that grow on the islands, the flora is quite monotonous. Typical are coconut palms, which are grown in plantations on some islands and otherwise grow wild. On the inhabited islands you can find crops such as breadfruit, papaya and bananas.

As in most of the smaller oceanic islands, there is not much biodiversity in the Maldives. In addition to various bat species, such as the Indian fruit bat, there are countless geckos, various lizards (beautiful lizards) and toads (black-nosed toads). The two known types of snake are harmless to humans. The rhinoceros beetle often causes considerable damage to the coconut plantations. In addition to various seabirds, there is a raven species in the Maldives and the small Alexander parakeet from the parrot species. The reefs are a stopover for numerous migratory birds, here you can also see several types of herons such as the gray heron, the mangrove heron and the crested egret.

The basis for the unique underwater world, which is the reason for approx. 40% of all tourists to visit the Maldives, are the corals. Corals belong to the so-called flower animals and form the reefs, which attract countless divers with their colors and as a habitat for exotic plants and fish. However, how long this idyll will remain is questionable: in the spring of 1998 there was a short-term warming of the sea (as a result of El Niño), which had fatal consequences for the coral reef ecosystem (not only in the Maldives). Estimates of what percentage of corals will die or will die in the next few years due to global warming will diverge greatly.

The population of the inhabited Maldives Islands is estimated at around 300,000 residents. The island of Hitadu in the southern atoll Seenu has the second highest population with approximately 7,000 residents. The fresh water available there is decisive for the settlement of the individual islands. There is a village community on each of the inhabited islands, the name of which corresponds to the name of the island. Thanks to improved medical care, the island nation is now one of the countries with the highest birth rates on earth and the population grows by an average of 2.8%. Life expectancy averages 64 years.

The Maldivians, who also call themselves Divehi, are probably of Arab-Indian and Malay origin. Almost all residents are Sunni Muslims, Islam is the state religion. This gives the man the right to take four wives, but this is practically no longer practiced today, primarily for economic reasons. According to COUNTRYAAH, the literacy rate is 97.2%, and there are now schools on all inhabited islands. 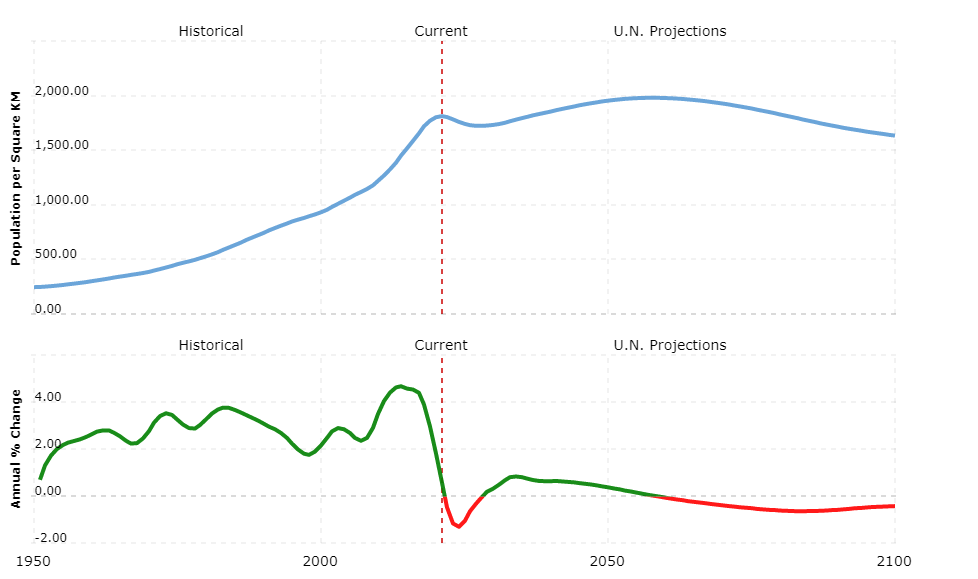 According to the 2008 constitution, the Maldives is a presidential republic of the Commonwealth. The head of state is the president, who simultaneously holds the office of head of government and minister of defense (Abdulla Yameen, since November 2013). It is proposed by the parliament and elected by the people for five years (one-time re-election possible).

The legislature lies with the parliament (Madschlis), which consists of 77 members who are elected by the people for five years. The opposition, which has been officially permitted since 1998, has in fact only existed since 2005.

The legal basis is Islamic law.

The Maldives are divided into seven provinces and one capital district.

The Maldives is one of the Asian countries that has made tremendous economic progress in recent decades – however, the new wealth remains very unevenly distributed.

Tourism forms the basis of the national economy. It contributes 28% to gross domestic product (GDP) and brings more than 60% of foreign exchange earnings. The tsunami in December 2004 threw the tourism industry back years: Due to the low height of the islands above sea level, they were swept over a wide area. Fishing and processing are the second largest industry. 11% of the workforce is employed there. On the islands away from the capital, fishing is still the basis of life for most of the residents; In addition, about 70% of the export is made up of fish (especially tuna). Millets, corn, cassava and sweet potatoes are grown for their own use.The most important crop is the coconut palm, from which copra, coconut fibers and oil are obtained.

In addition to fish, textiles are mainly exported to Thailand, Sri Lanka and Japan. Food and consumer goods, crude oil and ships are imported, especially from Singapore and the United Arab Emirates. The largest ports for commercial shipping are Male and Gan.