Malaysia is located in Southeast Asia and consists of two parts of the country: West Malaysia lies in the south of the Malacca Peninsula (border with Thailand in the north), East Malaysia with the provinces Sarawak and Sabah occupies the northwestern part of the island of Borneo (Kalimantan). The rest of Borneo belongs to Indonesia. The parts of the country are separated by about 600 km by the South China Sea. The total area of ​​the country is 329,759 km², making the country a little smaller than Germany. See Malaysia country abbreviation.

On the Malacca Peninsula, several mountain ranges run from north to south, which are foothills of the Indian mountains. The highest mountain range reaches a height of 2 190 m (Tahan). Towards the coast, the mountains change into hilly countries, which are followed by vast, swampy coastal plains. The southern tip of the Malacca Peninsula is mostly flat.

Alluvial plains also mark the coasts of the Malawian provinces Sarawak and Sabah on Borneo. Towards the middle of the island, the country rises to heights of 2.423 m (Gunong Murud, Sarawak) and 4.101 m (Kinabalu).

The capital, Kuala Lumpur, is located in the west of the Malacca Peninsula in the state of Selangor.

Both parts of Malaysia have a tropical, humid climate with consistently high temperatures all year round. The average value in the capital Kuala Lumpur is between 26 °C and 28 °C. In the higher altitudes, the temperatures are somewhat lower and are between 17 °C and 19 °C. The air humidity is very high and precipitation falls all year round. Between 2,000 mm and 4,000 mm are measured on the coasts and up to 6,000 mm in the mountains.

More than two thirds of the country’s territory is covered by evergreen rainforest, which changes into mountain and then cloud forest above approx. 800 m. The tree line is around 3 500 m. The forest stands in Sabah and Sarawak on Borneo are among the oldest virgin forest areas in the world. Deforestation and slash-and-burn field construction reduce the stocks annually. Large mangrove forests can be found on the coasts of Malaysia.

The fauna is just as diverse as the flora. Gibbons, macaques, malay bears and numerous reptiles such as cobras and pythons are widespread. Rarer species are elephants, tigers, clouded leopards, gold and marble cats and leopards. The orangutan, which is classified as a highly endangered species, lives on Borneo. The Sumatran rhinoceros is also endangered. The species-rich bird life includes, among other things, hornbills, beos, parrots, pheasants and owls.

According to COUNTRYAAH, 26.1 million people live in Malaysia, about 80% of them on the Malay Peninsula; the most densely populated areas are also located there. More than half of the population lives in cities. By far the largest city is Kuala Lumpur as the economic center of Malaysia with around 1.46 million residents.

More than 50 ethnic groups live in the country. 65.1% of the population are Malays. The largest ethnic minority are Chinese, who make up about a quarter of the population. The rest consist of Indians and indigenous peoples such as the Orang Asli, which includes a group of ancient Malay peoples who still live in the rainforests as hunters and gatherers. Ethnic minorities in Borneo include the Iban in Sarawak province and the Kadayan in Sabah. The Malaysian population is much lower in Borneo than in the Malay Peninsula.

The Malays are predominantly followers of Sunni Islam, Islam is the state religion. The second largest religious community are Christians with about 26%, followed by Buddhists with around 19.2%; Hindus make up about 7% of the population. Natural religions are also common. The official language is Malay (Bahasa Malaysia), English and Chinese are widely spoken. English is also important as a language of communication and education. Tamil and Iban are also spoken.

Social and health services are particularly well developed in the cities of Malaysia. Population growth is 1.8%, around a third of the population is younger than 15 years. The average life expectancy is 70 years. Children are required to attend school for eleven years and attend school free of charge; 87% of Malays can read and write. 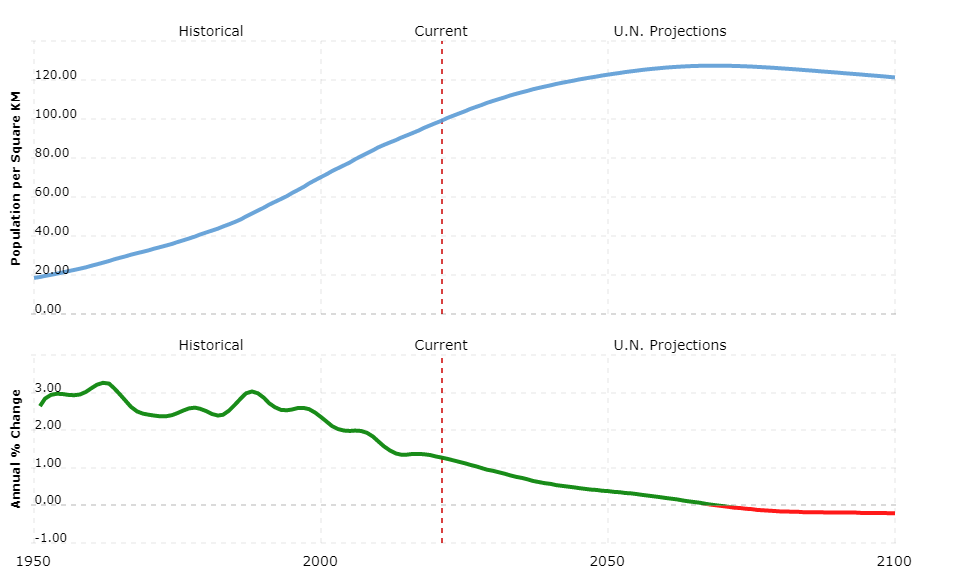 The State of Malaysia consists of 13 states (negeri-negeri) and three federal territories and is a federalist electoral monarchy in the British Commonwealth of Nations according to the 1957 constitution.

The head of state is the king (“Yang di-Pertuan Agong”; since December 2011 Abdul Halim Mu’adzam Shah). He is elected as one of the nine hereditary rulers (sultans) by the Conference of Princes, which – apart from the nine sultans – also includes representatives of the four other states. His term of office is five years. The king is the commander-in-chief of the armed forces. The cabinet is headed by the Prime Minister (Najib Razak since April 2009) as head of government. He is appointed by the king as the representative of the strongest party in parliament and is responsible to parliament.

The legislature lies with the parliament, which is made up of two chambers: the House of Representatives (Dewan Rakyat) with 222 people-elected MPs and the Senate (Dewan Negara) with 70 members, 44 of whom are appointed by the King and the rest by the state parliaments. The term of office of the senators is six years, that of the members of the House of Representatives five years.

The most powerful political grouping in Malaysia is the “National Front” party alliance; the most important of its parties is again the UMNO (United Malaysian National Organization). The party alliance formed all government coalitions since 1957. The main opposition parties include the radical Islamic PAS (Parti Islam Semalaysia), the Chinese minority party DAP (Democratic Action Party) and the liberal justice party PKR (Parti Keadilan Rakyat).

Malaysia has been one of the so-called “tiger countries” due to its rapid development to the industrial nation since 1970. Thanks to the “New Economic Policy” (NEP, since 1991 “National Development Policy”, NDP), the country is one of the richest nations in Southeast Asia.

Agriculture only contributes a tenth to gross domestic product (GDP) and employs 13% of the workforce. 35% of the agricultural land is taken up by plantations on which rubber, cocoa and palm oil are produced. Malaysia occupies leading positions in world production for all three. Small farmers mainly grow rice, sugar cane, tea, pineapple, coconuts and tobacco for their own use. The timber industry plays an important role. Malaysia is a world leader in the export of timber. Fishing also plays an important role.

Malaysia has deposits of high quality natural gas and oil. Imported crude oil, coal, hydropower and still firewood are used for our own energy needs. Other existing mineral resources include tin, copper, iron ore, bauxite and gold. Industry generates 41% of GDP and employs 28% of the total workforce. The automotive, high-tech and electrical industries are highly developed. Traditional industries are food, rubber and oil processing, as well as the textile and wood processing industries. The industrial centers (apart from the chemical companies) are on the west coast of the Malay Peninsula.

The Asian Free Trade Area (AFTA), founded in 1994, includes all ten member states of the ASEAN (Association of South-East Asian Nations), including Malaysia. The ASEAN Free Trade Agreement entered into force in 2002. The main trading partners are China, Singapore, Japan and the USA. Electronics, petroleum and chemical products are mainly exported and imported. Tourism also plays a role as a source of foreign exchange earnings.

The country’s infrastructure has developed to varying degrees, and there is a well-developed road and rail network on the Malay Peninsula. A total of around 125,000 km of paved roads are available. Kuala Lumpur has an international airport that has become a hub for flights to Australia and Oceania.

The currency is the ringgit.