Due to its location in the transition area between North and West Africa as well as a long succession of migration movements, Mali is a multi-ethnic state that is characterized by great cultural and linguistic diversity. There are marked differences in this regard, especially between the light-skinned ethnic groups of the Tuareg and Moors, who mainly live in the north, and the dark -skinned ethnic groups that dominate in the center and south of the country. In terms of numbers, by far the largest ethnic group are the Bambara, which together with the smaller related ethnic groups of the Malinké and Dioula make up about 51% of the population. Other larger ethnic groups are Fulbe(11%), Sarakollé (9%), Senoufo (9%) and Songhay (7%). The remaining population is divided into various smaller ethnic groups such as the Dogon, Bozo, Bobo, Tuareg and Moors.

According to weddinginfashion, Mali is a country located in Western Africa. The original settlement areas of the individual ethnic groups also show a series of overlaps as a result of migration movements and are often not clearly distinguishable from one another. For example, the main settlement area of the Dogon in central Mali has been increasingly characterized by emigration for several decades, with the result that today more Dogon live outside the Dogon country than in the Dogon country itself.

In the traditional (semi) nomadic Tuareg and Moors, tendencies towards settling down can increasingly be recognized, which in many cases are related to changing ecological and socio-economic framework conditions. The proportion of the nomadic population has been declining for decades and is estimated to be less than 4% of the total population.

In 2011, violent acts of Fulbe immigrants from Niger were reported from the northeast of the Mopti region, and they began to threaten the peaceful coexistence between the Fulbe and Tuareg.

The most important national language is the Bambara language (Bamanankan) belonging to the group of Mande languages, which has increasingly become the lingua franca of Mali and is spoken by around 80% of the Malian population. There is now also a Bambara online lexicon. Basic knowledge of the blessings expressed on many occasions are highly regarded. The official language is French. 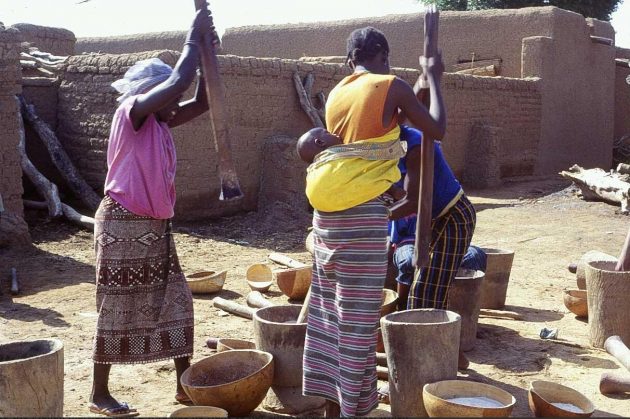 Women in a village in central Mali

The majority of the Malian population lives below the poverty line and earns their livelihood largely by working in agriculture and increasingly also in the informal sector.

The opportunities to find a job in the modern economic sector (industry and services) are largely limited to the cities. Due to the weakness of the modern economic sector and the continuing high level of immigration from rural areas, unemployment is also a serious problem in the cities, which also affects many university graduates. So far, state funding programs have not been able to change much.

Trade unions are campaigning against job cuts as a result of the privatization of state companies and for better working conditions in the gold mines. Strikes by minibus drivers and small traders affected public life in Bamako several times.

In the last few decades the proportion of the urban population has increased significantly, the main cause of which can be seen in massive rural-urban migration. The reasons for rural migration are complex and include economic, social and ecological causes. Efforts by the government to reduce emigration from the countryside have so far mostly proved unsuccessful.

Emigration is of great importance and often takes place under dangerous conditions. In many cases families invest relatively large amounts of money in order to enable younger family members to emigrate to Europe, which is becoming more and more difficult in view of the increasing isolation of Europe. An estimated three to four million Malians live permanently outside the Malian state borders, especially in the Ivory Coast and other neighboring countries. According to different estimates, 200,000 to 300,000 Malians live in France, some of whom do not have valid residence status. From France and from AlgeriaNumerous forced deportations of Malian emigrants are reported, whereby in Mali itself the self-organization of deportees is gradually gaining in importance.

For numerous migrants from sub-Saharan Africa, Mali is an important transit country to North Africa and Europe.

During the Libyan civil war, and after the war ended, numerous Malian immigrants were held in internment camps.