Libya (officially “Great Socialist Libyan Arab Jamahirija”) is located in North Africa and, with an area of ​​1,769,540 km², is the fourth largest country on the African continent (and about five times the size of Germany). The country borders Egypt in the east, Sudan in the southeast, Chad and Niger in the south, Algeria and Tunisia in the west and the Mediterranean in the north. Over 85% of the total area of ​​the country is occupied by the Sahara, which extends from the Atlantic to the Red Sea in the north of the African continent and is the largest contiguous desert area on earth with a total area of around nine million square kilometers.

In the north-east of Libya lies the Cyrenaica landscape, which stretches from the Mediterranean to the Libyan desert: after a narrow stretch of coast, the karst mountains of Jabal al-Akhdar rise to heights of up to 876 m, followed by the steppe landscape of Marmarika in the east. The country gradually descends to the south to the Libyan Desert, which mainly consists of extensive sand dunes and gravel deserts. In the south-east, foothills of the Tibesti Mountains extend from Chad to Libya, the highest point in the country at 2,285 m.

In the middle section of the country near the coast (Gulf of the Great Syrte) is the Syrte Basin, an oil-rich plateau. To the south is the volcanic massif Al-Haruj al-Aswad, which reaches heights of up to 1200 m.

In the north-west of Libya (Tripolitania), the coastal plain (Al Jifarah) is followed by the mountainous Jabal Nafusah (up to 968 m). To the south is the highland Al-Hamadah al-Hamra, which descends in the south over a steep step to the Fessan desert, a sand and stone desert.

There are few rivers in Libya, none of them have water all year round. The capital,Tripoli, is in the northwest of the country on the Mediterranean coast.

The coastal area of ​​Libya has a Mediterranean climate with mild, humid winters and hot summers. The average January values ​​on the coast are around 12 °C, in July the average is 26 °C. The rainfall amounts to about 300 mm annually, most precipitation falls as winter rains.

The desert climate in the interior of Libya is characterized by large temperature fluctuations. In the summer months, maximum values ​​of up to 55 °C can be reached, in winter the temperature can drop below freezing. Precipitation can be absent for years. When it rains, it is often so violent that floods occur because the dry and stony soil cannot absorb the water.

Over 85% of Libya is desert with almost no vegetation. In the coastal regions there is Mediterranean vegetation with olive trees and juniper bushes, in the coastal lowlands also steppe vegetation.

Only animal species adapted to the drought find a suitable habitat in Libya, including, for example, gazelles, hyenas, jackals, desert foxes, jellyfish and wild donkeys. Animal species such as desert lynx and sand cat are rare and are considered endangered species.

Around 5.68 million people live in Libya, with an average of three residents per square kilometer, the country is very sparsely populated. 88% of the population live in cities. The largest city is the capital Tripoli with 1.15 million residents. The second largest city is Benghazi (population 637,000).

According to COUNTRYAAH, 97% of the population are Arabs and Arabized Berbers, minorities are members of the Tuareg and Tubu, Egyptians, Sudanese and Palestinian refugees. Islam is the state religion, around 97% of the population profess it (mostly Sunnis). The official language is Arabic, which is spoken in various dialects.

Population growth has risen to 2.3%. Healthcare in Libya is one of the best educated on the African continent; Social insurance also includes old-age provision and a widow’s and orphan’s pension. The average life expectancy is 76 years. School attendance is compulsory for children between the ages of six and 15, attending the nine-year primary school is free of charge; 83% of Libyans can read and write. 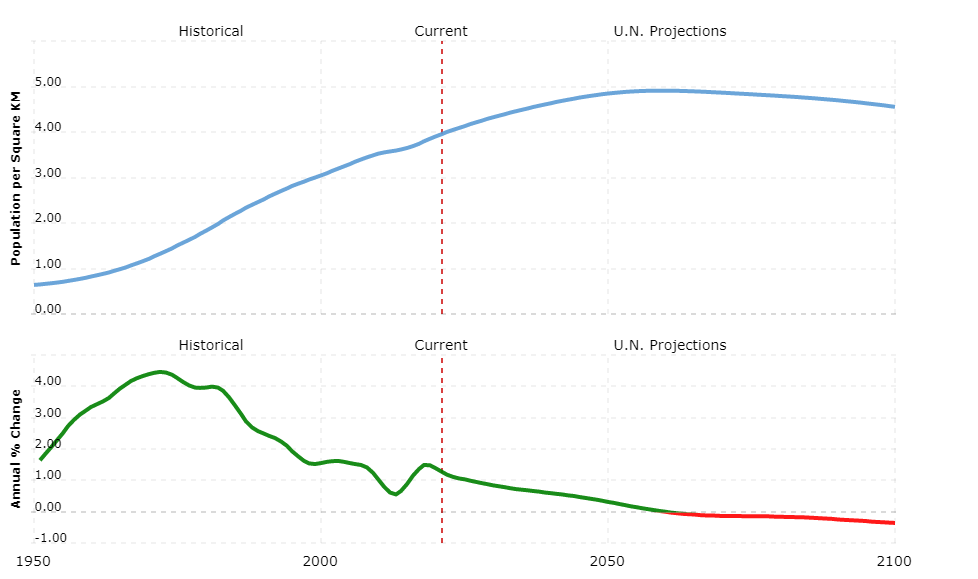 The constitution is in preparation. In July 2012 the General National Congress (ANK) was elected (200 deputies). Transitional President has been Nuri Abu Sahmein since June 2013, and Prime Minister Ali Seidan since October 2012.

Libya’s economy is primarily based on oil exports (Libya has the eighth largest oil reserves in the world). Since the lifting of the economic sanctions imposed by the UN in 1999, the country has become more attractive for foreign investors and companies. With an estimated per capita income of around $ 6,700, Libya is one of the most prosperous countries on the African continent. In June 2001, Libya, Egypt, Iraq and Syria decided to establish a free trade area to improve their economic cooperation. A common market for the Arab states is to be created along the lines of the European Union.

Only 1.2% of the state area can be used for agriculture. Agriculture contributes 9% to gross domestic product (GDP) and around 17% of the workforce is employed in this sector. Wheat, olives, tomatoes, melons and citrus fruits are mainly grown. Livestock farming and fishing are of little importance. Libya has to import three quarters of all food.

Besides mineral oil and natural gas, iron ore, salt, phosphate, baking soda, sulfur and uranium are present in mineral resources. A large part of the industrial companies process the extracted oil further, textiles, cement and handicraft products are also manufactured. Over 45% of GDP is generated by industry with a third of all workers. Petroleum, petroleum products and natural gas make up 85% of export earnings; the most important customers are Italy, Germany, Spain and Turkey. In addition to food, machinery and means of transport as well as industrial primary products are imported from Italy, Germany, Tunisia and Great Britain.

The road network covers a total of around 83,000 km, of which around 47,000 km are paved. Rail traffic was discontinued in 1965 and there are plans for a new network covering around 3,000 km. There are international airports in Tripoli and Benghazi.

The currency is the Libyan dinar.