The Republic of Latvia is located in northeastern Europe in the Baltic States and, with an area of ​​64,600 km², is about three quarters the size of Austria. In the north the country has borders with Estonia,in the east with Russia,in the south with Belarus and with Lithuania. In the north (Gulf of Riga) and west, the country borders on the Baltic Sea. See Latvia country abbreviation.

Latvia represents the northwest of the Eastern European lowlands, characterized by hilly lowlands with wide, fertile plains. More than half of the total national area is less than 100 m above sea level. On the flat Kurland peninsula (Kurzeme) in the west of the country, there is a moraine up to 184 m high (Kurländische Schweiz). In the east of Latvia, on a final moraine plateau belonging to the Baltic Ridge, read the highest point in the country, the Gaising with 311 m. The Semgallian plain extends from the border of Lithuania in the south of the country to the Gulf of Riga.

A dense network of rivers and small lakes runs through the country. Of the approximately 3,000 lakes, the Lubahn lake (Lubãnas) is the largest with about 80 km². Its average depth is 40 cm, so that the drought will reduce the size of the lake. The longest river is the Daugava, which rises in Russia and flows through Latvia for a length of 357 km before it flows into the Gulf of Riga near the capital Riga.

Latvia is in the cool temperate climate zone. The average January temperatures in the capital Riga in the north of the country are -4 °C, the average July temperatures are 17 °C. The annual rainfall is given as 570 mm, in the somewhat higher areas up to 800 mm are also reached.

Around 40% of the country is forested, the most common are pine, spruce and birch, but also fir, white alder and aspen. Around 10% of the country’s area is occupied by swamps and bogs.

In the protected areas of Latvia there are still animal species that are considered endangered, including lynx, brown bear and elk; Beavers and raccoons live on the shores of the many lakes. Among others, wolf, fox, mountain hare, capercaillie and hazel grouse, marten and ermine as well as larger populations of red and wild boar live in the coniferous and deciduous forests. The bird life is rich in species, the common white stork is Latvia’s national bird.

Around 58% of the population are Latvians, Russians make up the largest minority with almost 30%. Other minorities are Belarusians (4.0%), Ukrainians (2.7%), Poles (2.5%) and Lithuanians. The only official language is Latvian.

According to COUNTRYAAH, 38% of the faithful belong to the Evangelical Lutheran Church, there are also the Roman Catholic with 35% and the Russian Orthodox Church with 15% and the Jewish synagogue community.

The health and education system is well developed. Life expectancy for women is 77 in Latvia and 66 for men. The population shrinks by an average of 0.7% each year because Latvia has a relatively high rate of emigration and a low birth rate. Literacy is practically comprehensive; Over 70% of adults have completed middle or high school. 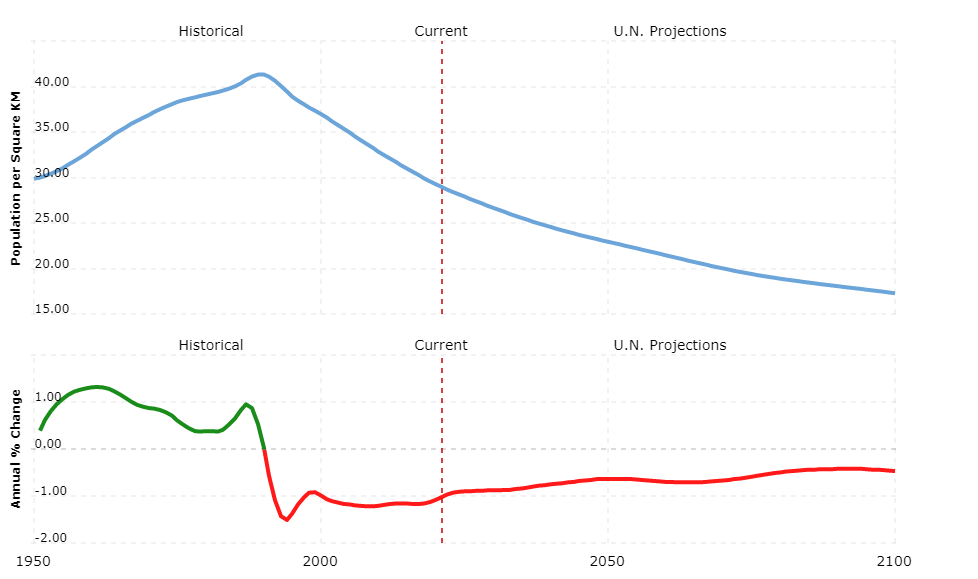 Latvia is – according to the current constitution of 1922, which has been back in force since 1993 – a parliamentary republic with a multi-party system. The head of state is the president, who is elected by parliament for a term of four years ( Andris Berzins since July 2011). The executive is exercised by the Council of Ministers under the leadership of the Prime Minister (since March 2009 Valdis Dombrovskis). The ministers are appointed by the People’s Assembly on the Prime Minister’s proposal.

The legislature lies with the parliament (Saeima), whose 100 members are directly elected for four years.

Latvia is divided into 109 municipalities and nine cities.

The Latvian economy has overcome the economic and financial crisis. Economic performance has grown steadily since 2010. In 2012 the gross domestic product (GDP) rose by 5.6%. The unemployment rate fell again in 2012 from 21% to almost 15%. The euro was introduced on January 1, 2014.

Agriculture employs around 8% of all workers, but only generates around 4% of GDP. The main crops are potatoes, cereals, sugar beets and vegetables. Dairy and fattening cattle farming and pig breeding dominate in livestock farming. Both fishing and the timber industry play an important role.

The most important branches of industry are mechanical and motor engineering and the electrical industry, food and wood processing companies are also important. Latvia has very few natural resources (peat, limestone, clay). Only around half of the total energy required can be covered by the Latvian hydro and thermal power plants.

Raw materials and food are among the most important export goods, mainly oil, food and chemical products are imported. Imports come from Lithuania, but to a large extent also from Germany. Most of the exports go to Russia, Lithuania and Estonia.

The road network covers around 60,000 km, and 2,300 km are available on rails. The main seaports are Riga, Liep¨¡ja and Ventspils. The airport in Riga is the most important of the three airports in the country.