Kyrgyzstan (officially Kyrgyzstan Respublikasy, German Kyrgyzstan or Kyrgyzstan) is located in Central Asia. The former Soviet Republic has an area of ​​199,900 km² and borders in the north on Kazakhstan, in the west on Uzbekistan, in the southwest on Tajikistan and in the southeast on China. See Kyrgyzstan country abbreviation.

Kyrgyzstan is a high mountain country. Around 50% of its surface is over 1,000 m, a third over 3,000 m above sea level. The highest mountain in the country is the Pik Pobedy with 7 439 m. It rises in the Tienschan Mountains in the northeast, which in addition to this mountain also has the 6,995 m high Chan-Tengri. In the southwest of the country are the Alai and Transalai mountains, which also have mountains over 7,000 m high. Valleys and basins stretch between the mighty mountain ranges. The most important valleys are the Talas, the Alai and the Tschutal, the most important basins are the Issykkul and the Fergana basin. The largest lake in the country is Issykkul, which is located in the north-east, which in Kyrgyz means “hot lake”. The 6 236 km² drainless water is fed by hot springs and is therefore ice-free, even though it is at an altitude of 1.608 m. The country’s largest river is the Naryn, which is the right source of the Syrdarja (in ancient times Iaxartes). After 3,019 km it flows as a trickle in the Aral Sea. Several reservoirs, the largest of which is the Toktogul with a 214 m high dam, are used to generate energy and to irrigate the Fergana basin.

Kyrgyzstan has a dry continental climate with large temperature differences between day and night and between summer and winter. The decisive climatic factor is the respective altitude of the region. The average temperatures in Bishkek, the country’s capital, are between 750 and 900 m above sea level. NN lies at the foot of the Tien-schan, -13 °C in January and 21 °C in July. The annual rainfall amounts to around 400 mm, on the north and west edges of the mountains fall up to 1 000 mm.

The vegetation in the country depends on the altitude. Up to a height of around 1,500 m there are bush and grass steppes, deserts and semi-deserts. This is followed by dry mountain steppes at altitudes of up to 4,000 m, which merge into subalpine and alpine meadows. Forest groves made of spruce and juniper species stand within these meadow regions. Walnut forests can also be found in the southern part of the country. These deciduous trees have large, feathery leaves and are important suppliers of wood. In addition, cooking oil can be made from the seeds. The altitudes above 4,000 m are taken up partly by firn regions and partly by glacier regions.

The wildlife of Kyrgyzstan has been adapted to the different altitudes. The forested regions are inhabited by brown bears, wild boars, gray wolves, stoats and foxes. Wild mountain sheep can be found in the forested valleys in the steppe regions, but goats, deer and snow leopards are also at home here. The deserts and semi-deserts are inhabited by ground squirrels, hares and hedgehog species.

Up to a fifth of the rural population up to the 20s of the 20th century already lives in the cities, especially in the capital Bishkek, which is the largest city in the country with 750 500 residents. The country’s second largest city is Osh in the south of the republic. Osh was an important trading post on the Silk Road, which had connected China to the Middle and Black Seas since the 2nd century, and today has around 210,000 residents.

A total of around 5.15 million citizens of Kyrgyzstan are 65% Kyrgyz, 14% are Uzbeks and only 12.5% ​​Russians. The majority of the Russian population, who had settled in Kyrgyzstan at the time of the Soviet Union, emigrated again. Smaller minorities are the Tatars and the Ukrainians as well as Kazakhs, Dungans, Tajiks and Uyghurs. Up to the 1990s, 3% of the population were of German origin. German Mennonites settled in the country as early as the 19th century, during the Second World War the forced settlement of ethnic Germans from other Central Asian countries, such as the Volga region, followed, which continued into the 1950s and 1960s. Since the 1990s, about 100,000 ethnic Germans have left the country, A small group of around 20,000 people remained, mainly in the Bishkek, Tokmok, Sokuluk and Mailii-Suu regions.

According to COUNTRYAAH, the vast majority of the population are mostly Sunni Muslims (75%), 20% belong to the Russian Orthodox Church. The official language is Kyrgyz, which belongs to the group of Turkic languages. The common language of communication is Russian. There is also an existence guarantee for the languages ​​of the numerous national minorities.

The population growth is just under 1%, the average life expectancy is 68 years. Since the government is very concerned about education, the literacy of the population is very high (97%) despite the poor economic situation. 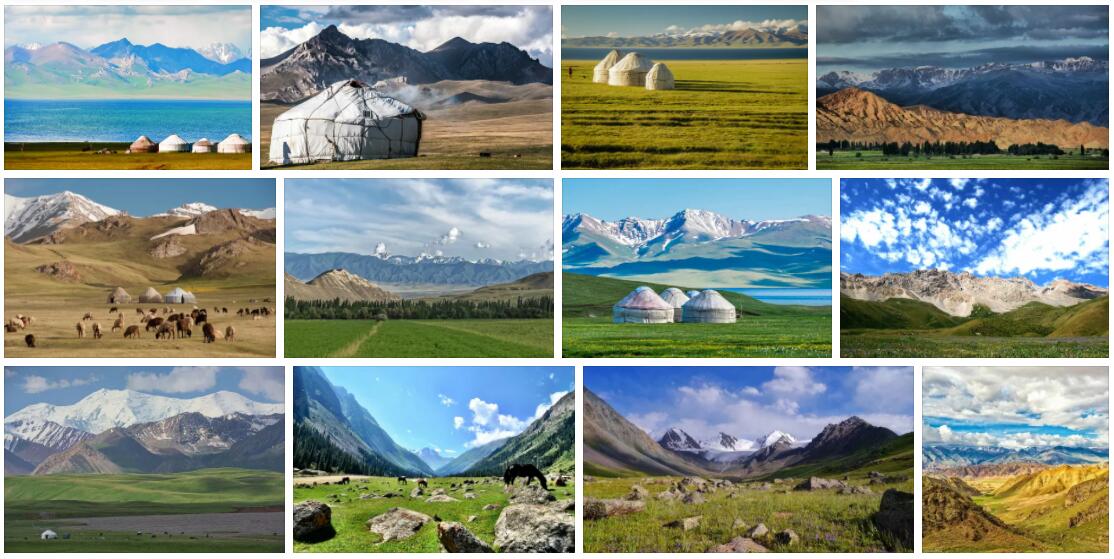 According to the 2010 constitution, Kyrgyzstan is a parliamentary republic.

The political system is a mixture of a parliamentary and a presidential system. The directly elected president (Almazbek Atambayev, since December 2011) has a number of important powers, for example with regard to the appointment and dismissal of senior judges and attorney general. He is also commander in chief of the armed forces and chairman of the Security Council. The president has a six-year term (one-time re-election). However, Prime Minister (Dschantörö Satybaldijew, since September 2012) and Parliament also have a strong position.

The legislature lies with the unicameral parliament, the Supreme Council (Dschogorku Kenesch). It consists of 120 deputies who are elected for five years.

The Supreme Court is the highest authority in civil law, in criminal, administrative and commercial law.

The administration is divided into seven areas (oblasts) and the capital district.

The economically poor country was able to reduce inflation and stabilize the economy after setbacks in recent years, although up to 30% of the state budget was met by Moscow before the collapse of the Soviet Union and 90% of trade with COMECON countries took place. The most important growth drivers are trade and services. Nevertheless, almost 40% of the population live below the poverty line, more in the south than in the north.

The service sector contributes almost half to gross domestic product (GDP). Agriculture generates a fifth. Goats, yak and fattening cattle are kept on the 7% of the country’s land where agriculture is possible. Silkworm farming traditionally plays an important role. Fruit and wine, poppies and vegetables, potatoes, sugar beets, cotton, cereals and tobacco are grown. Cotton, wool, meat and tobacco are the main products of agricultural exports.

The main exports of industry consist of gold, uranium and electricity, which is generated in the country’s numerous river power plants. In addition, smaller amounts of mercury, antimony and gold ores and marble are mined in the country, which is poor in raw materials. The most important import goods are oil and natural gas, machines, chemical products and industrial goods.

The main customers are Switzerland, Kazakhstan, Russia and Uzbekistan; most of the imports (mainly oil and gas, machinery and food) come from Russia, China and Kazakhstan.

There are international airports in Bishkek and Osh, and shipping on the Issykkul River.