The Republic of Kenya is located in East Africa and extends on both sides of the equator. With an area of ​​582,646 km², the country is slightly larger than France. Kenya borders Sudan and Ethiopia in the north, Somalia in the northeast, the Indian Ocean in the southeast, Tanzania in the south, Lake Victoria in the southwest and Uganda in the west. See Kenya country abbreviation.

The coastal plain on the Indian Ocean is narrow in the southern section and widens to the north up to 250 km. The coast itself is divided by numerous bays, reefs and offshore islands. To the west, the country initially rises to about 1,000 m, a slightly undulating plateau covers almost the entire north and east of Kenya. Individual mountain ranges tower over the plateau. The central part of Kenya is occupied by the Kenya highlands, which are at an altitude of 1,500 to 3,000 m above sea level. Across the central highlands, the East African Rift (Rift Valley) runs from north to south, from Lake Turkana (formerly: Rudolfsee) in the north of the country to other lakes (Baringo, Bogaria, Nakuro, Elemeteita, Naivasha – and Magadisee) as far as Tanzania. The width of the trench varies from 70 to 300 km, as are the altitudes.

To the west of the trench, the central highlands of Kenya continue (with isolated mountains up to 4,300 m high) until the country in the far west falls to the basin of Lake Victoria (in which Kenya, Tanzania and Uganda also have a share). The northwest and north of Kenya is occupied by Tafelland.

Kenya’s capital, Nairobi,is located east of the East African Rift on the Athi Plain at an altitude of 1,670 m.

The climate of Kenya is determined by the proximity of the equator. In the lower areas in the southern part (coastal plain, Victoria valley) there is a hot and humid climate with consistently high temperatures all year round (on average 26 °C). The climate is tempered at higher altitudes, with average values ​​around 17 °C. There are two rainy seasons that last from October to December and from April to June. 700 mm to a maximum of 1,800 mm can be reached on the coast and in the highlands, sometimes more on the slopes of the mountains. The driest area in Kenya is Tafelland in the north.

The largest part of the country is characterized by savannas and extensive grasslands. Rainforests can be found on the rainy slopes of the mountains, which at a height of approx. 2,000 m merge into cloud forests with a high proportion of bamboo. Deforestation and slash-and-burn have severely decimated the forest, and the government is trying to counter the erosion of the soil through afforestation programs. Desert steppes can be found in the low-precipitation north of Kenya. Mangroves, palm trees and hardwood forests grow in the hot, humid coastal area.

Kenya’s wildlife is very rich in species and has large game populations. Around 8% of the country’s total area has been declared a protected area, including the Amboseli, Lake Nakurus and Tsavo National Parks. The Maasai Mara game reserve in the southwest of the country is one of the most animal-rich areas on the entire African continent. For example, lions, cheetahs, elephants, zebras, wildebeests, antelopes, gazelles, giraffes, buffaloes, rhinos and baboons live in Kenya. In addition to various flamingo species, the diverse bird life also includes pelicans, herons, ostriches, eagles and vultures.

Around 40 different ethnic groups live in Kenya, more than half of them belong to the Bantu-speaking peoples such as the Kikuyu, who make up around 22% of the total population, the Luhya (14%) and the Kamba (11%). The Nilo tribes include the Luo (13%) and the Paranilotic language group the Kalenjin (12%). The Maasai in the south of the country make up one to two percent of the population. Non-African groups (Asians, Arabs, Europeans) form minorities.

According to COUNTRYAAH, 73% of the population of Kenya are followers of Christianity, mostly Catholics. An estimated 19% of Kenyans practice natural religions, 8% are followers of Islam. The official languages ​​are Swahili and English, which serves as the commercial and communication language. In addition, around 30 other languages ​​are spoken.

Population growth is 2.5% per year, although the HIV infection rate (approximately 8% of the adult population) and infant mortality (6.1%) are high. Due to the numerous AIDS diseases, the completely inadequate health care and the great poverty (over half of Kenyans live below the poverty line), life expectancy is only 48 years. School attendance is compulsory for children between the ages of seven and 15. The literacy rate is 85.1%. 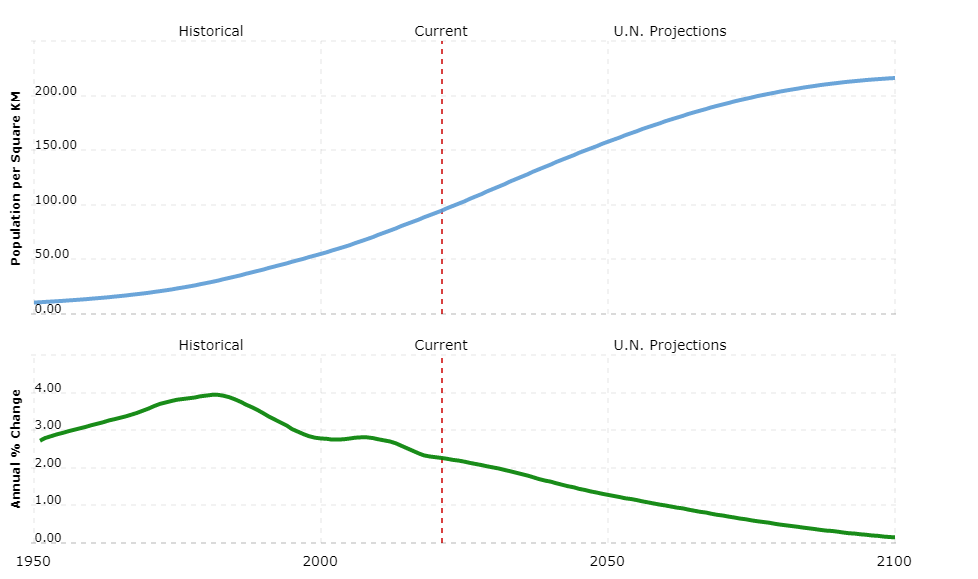 Kenya is a presidential republic based on the constitution of 2010. The head of state is the president (Uhuru Kenyatta, since April 2013). Both the government and the armed forces are subordinate to it. The President is directly elected for a term of five years (one-time re-election possible).

The Kenyan state is divided into 47 districts.

Kenya is the most powerful economy in East Africa, but more than half of the population lives below the poverty line. The crisis that followed the December 2007 elections has only temporarily dampened Kenya’s economic prospects.

Services are now the most important sector, with a 55% share of gross domestic product (GDP). Tourism is an important source of foreign currency for Kenya with around one and a half million holidaymakers every year.

Agriculture generates over a quarter of gross domestic product (GDP). Almost eight percent of Kenya’s available agricultural land. Almost three quarters of the workforce is employed in this area. The most important crops are tea and coffee, which are grown in large companies for export, as well as cotton, sugar cane and vegetables (beans, peas). For own use, cereals, beans, sweet potatoes, cassava and bananas are grown in small businesses. Dairy farming is particularly important in cattle breeding. Fishing in the fish-rich inland waters serves the self-sufficiency of the population.

The industry (17% of GDP) has been growing continuously since the beginning of the 1990s and focuses on the processing of domestic raw materials, mainly producing textiles, paper and tobacco products, cement, chemical products, machines and vehicles. Kenya has resources of soda ash, iron ore and gold. The main customers are Uganda, Great Britain, Tanzania, the USA and the Netherlands.

Kenya’s road network covers around 65,000 km, of which around 7,800 km are paved. There are around 3,000 km of rail available, the most important connection being the line between Mombasa and Nairobi. There are international airports in both cities.

The currency is the Kenyan shilling (= 100 cents).