The territory of Kazakhstan (officially Kazakstan Respublikasy) lies on the border of Asia with Europe and extends from the Caspian Sea in the west to the Altai Mountains in the east over two time zones and a length of 3,000 km. In the north, the country borders on the Siberian lowlands of Russia, in the south on the Kysylkum desert and the Tien-shan mountain range. With an area of ​​2,724,900 km², Kazakhstan is about five times the size of France. It is the second largest within the CIS (Commonwealth of Independent States), of which the country is a member.

A total of around 12,000 km of borders connect Kazakhstan with its five neighboring countries: in the southeast with China, in the south with Kyrgyzstan, with Uzbekistan and with Turkmenistan. Finally, in the north is the 6,846 km long border with Russia. The country’s capital is Astana with around 313,000 residents. Around 1.3 million people live in the former capital, Almati. The city on the border with Kyrgyzstan is better known in the west under its former name: Alma-Ata. Other major cities are Karaganda (436,900 residents), Shymkent (360,500), Pavlodar (301,000) and Taraz (330,500).

Large parts of the country of Kazakhstan consist of plains, more than two thirds of the country area are deserts and semi-deserts. The north is part of the West Siberian lowlands, to the west is the Caspian Valley, the Kazakh steppe and the low mountain range of the Mugujar Mountains, which is over 700 m high. Behind it is the Caspian Sea, the largest drainless lake on earth. Its main inflow is the Volga. Numerous rivers flow through the steppe areas (in total there are around 8,500 larger and smaller rivers in Kazakhstan). They flow either in the Caspian Sea or in the Balchasch or Saissansee, the most important inland waters in Kazakhstan alongside the Aral Sea. The largest rivers are the Urals and the Emba, which flow into the Caspian Sea, while Syrdaria flows into the Aral Sea and the Ishim and Tobol rivers into the Arctic Ocean. The center of the country is occupied by the Turgai tablet country and the wide Kazakh threshold. In the south are deserts and the lowlands of Turan, in which the Aral Sea lies. The Aral Sea is the most famous of the approximately 48,000 lakes in the country, some of which are saline. In the region of Lake Balchasch further east are the Hunger Steppe (Betpak-Dala), Mujunkum and the Siebenstromland. High mountains lie on the eastern and south-eastern edge of these regions: the southern Altai, the western Tarbagatai mountains and on the border with China the northern Tien-shan with the 4,973 m high Transili-Alatau, the highest mountain in Kazakhstan. There are approximately 2,700 glaciers in the country’s mountains.

A dry continental climate prevails in Kazakhstan, which is due to the mountain-related shielding of the country from the large oceans and their rain clouds. The low average rainfall increases only slightly from the south with 150 mm a year to the north to 300 mm a year. Only in preferred locations of the high mountains do clouds of rain rain more frequently, thereby increasing the local rainfall to over 1,000 mm per year. The temperatures are extremely different in the seasons: hard cold winters alternate with hot summers. In Alma-Ata they average -10 °C in January, but rise to 24 °C in July. The lowest winter temperatures can also drop below -40 °C, but rise to over 30 °C in summer. Sandstorms often occur.

The flora of Kazakhstan in the far north and on the border with Siberia is characterized by forest steppes, which merge further south into real steppe zones. These take up about a quarter of the total area of ​​the state. Further south, the country changes into semi-deserts and finally into extremely dry desert zones, which together take up more than half of the country’s territory. Continuous strong winds in the steppes and deserts result in severe soil erosion, which leads to further desolation of the areas concerned. The region between the mountain ranges in the south and the Aral Sea has a great wealth of flora and fauna despite the inhospitability of the region. The flora has adjusted to the large temperature differences and the lack of groundwater. For example, some plants form double root systems, one of which is close to the surface and picks up the rare and scarce spring rain, the other, however, penetrates to a depth of 70 m in order to supply the plant with moisture during the dry seasons. Dwarfism and a high proportion of wood fabric and hairy leaves are further signs of adaptation to the unfavorable natural conditions. On the other hand, with a good water supply, such as that found in oases or rivers that carry water all year round, lush vegetation thrives. Grasses such as marjoram, sweet clover and mugwort occur here. Other common plants in this room are reeds, willows, poplars and bulrushes. In addition, there are an estimated 250 different medicinal herbs.

The wildlife in Kazakhstan is also richer than the large desert areas suggest. Around 155 mammal species, 480 bird and 150 fish species live in the country, primarily along the lakes and along the rivers, but also in the steppe deserts. The animal kingdom ranges from wolves, bears, foxes, lynxes, gazelles and camels to desert jerboa and numerous types of lizards and snakes. Reptiles and insects also come in different types. The Aral Sea serves as a resting place for numerous migratory birds. Around twenty freshwater fish species live in the lake and have adapted to the salinity. These are primarily carp and perch, but also pike and salmon, which were brought into the lake by the fishermen. A major problem with all the lakes in the region is the severe salinization and desolation of the lakes,

In recent years, the proportion of the population who describe themselves as Kazakhs has increased significantly: Today, 57% of the 15.07 million people consider themselves to belong to the population group that gave the state its name. According to COUNTRYAAH, 27% of the population are of Russian origin and mostly immigrated to the time of the Soviet Union. Another 3% are Ukrainians. In the past decades, a large proportion of the ethnic Germans relocated to Germany as late emigrants, which reduced their share in Kazakhstan to around 650,000 residents. Likewise, after the declaration of independence in 1991, the Russian share of the population decreased.

The majority of the Kazakhs who come from the Turkic peoples are Sunni Muslims. By contrast, the Slavic Russians and Ukrainians mostly belong to Orthodox Christianity. There are currently as many Muslims (47%) as Orthodox Christians (44%) living in the country.

Kazakh is the official language; Due to the high proportion of Russian citizens, Russian is spoken in large parts of the country as a colloquial language. The population density varies greatly depending on the region. Most citizens of Kazakhstan live in the agricultural steppe areas in the north and in the area in and around the city of Almati in the south of the country.

Life expectancy averages 66.5 years; the low population growth of 1.1% is partly due to emigration, especially of minorities. 98.5% of the Kazakh population can read and write. 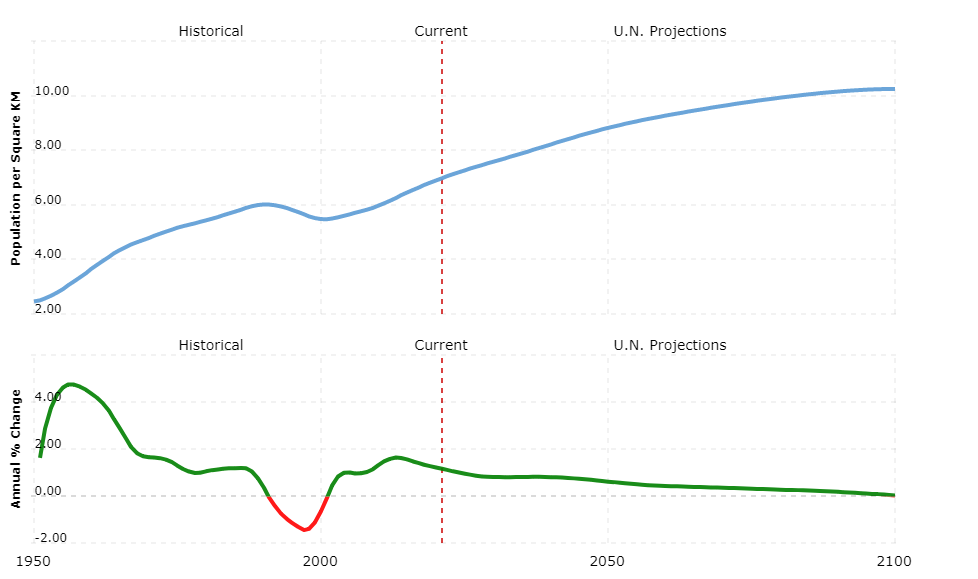 Kazakhstan has officially been a sovereign and democratic presidential republic with a multi-party system since 1995. The head of state is a president elected directly for five years (Nursultan Ä. Nazarbayev, since 1990). His term of office is seven years. The Prime Minister (Kärim Mässimow, since April 2014) holds the highest executive power and is appointed by the President, as is his deputy.

The parliament consists of two chambers: the lower house and the senate. The 107 deputies of the lower house (Madschlis) are elected every five years, nine of them are representatives of ethnic minorities. The Senate has 47 members, 32 of whom are elected and 15 are appointed by the President; the senators remain in office for six years.

The Supreme Court has 44 members, and there is a constitutional court with seven judges.

Kazakhstan is divided into 14 provinces (Oblystar), two cities (Quala; these are Almati and Astana) and the special district of Baikonyr.

The increasing exploitation of Kazakhstan’s rich mineral resources – oil, natural gas, coal as well as iron and copper ore – has given the economy a considerable upswing in recent years. Heavy industry, which was still built in the Soviet era, has increased the share of industrial production to gross domestic product (GDP) to 39%. Thanks to the vigorously implemented reform program and foreign investments, but above all due to the increased oil production and export, economic growth of 5.0% was again achieved in 2012. The pipeline to the Black Sea opened in 2001 was also decisive for this.

The agricultural sector (4% of GDP) mainly produces grain, which is also exported, and cotton. Livestock breeding (including Karakul sheep for wool production) is also practiced on a large scale in Kazakhstan.