According to the UNHCR country office in Jordan, there are currently (spring 2020) around 700,000 registered non-Palestinian refugees, around 670,000 of them from Syria. Another half a million Syrians are believed to be in the Hashemite kingdom without refugee status. Around 170,000 UNHCR-registered Syrian refugees are now officially allowed to work, around 28 percent of the UNHCR-registered refugees from Syria of working age. Due to years of flight, the legal, social and economic situation of many refugees from Syria in Jordan is precarious.

According to estatelearning, Jordan did not sign the 1951 Refugee Convention. There is no legal right to asylum. In fact, Jordan is one of the most important countries of refuge for refugees worldwide, especially with regard to the volume ratio between the resident population and refugees. Currently around 50 percent of all residents in the country have a refugee background. The largest group of refugees in Jordan are the Palestinians. According to the Palestine Refugee Agency UNRWA, there are currently over two million registered Palestine refugees in Jordan, more than half of whom are Jordanian citizens. Most of the Palestinians in Jordan have come to terms with the current situation, but they are demanding compensation for their homes and lands, which were expropriated by Israel in the course of the establishment of the state and afterwards. Quite a few still hope to return to Palestine. Since the Palestinians are not looked after by the United Nations High Commissioner for Refugees, UNHCR, but by the refugee agency UNRWA, they are not included in the international UNHCR’s Jordan country report.

Jordanis economically dependent on workers from abroad. Around 300,000 migrant workers come from Egypt, most of them male and between the ages of 18 and 35. Egyptians are employed in agriculture in the Jordan Valley, in the catering / hotel industry and in tourism. The second largest group (an estimated 70,000 to 80,000 people) comes from South and Southeast Asia: The countries of origin are primarily Sri Lanka, Bangladesh, Indonesia and the Philippines. These are predominantly women between the ages of 18 and 40 who work in private households or in the textile factories of the so-called Qualifying Industrial Zones. Many Asian migrant workers have to go into debt in order to be able to work in Jordan. Often their papers are taken from them on arrival. Without papers and in complete ignorance of their surroundings, numerous women are exposed to abuse and exploitation without protection. The human rights organization Amnesty International and other stakeholders have repeatedly called on the Jordanian government to take measures to protect domestic workers.

The third largest group of migrant workers in the past came from Syria. The figures fluctuated greatly as many Syrians willing to work came with tourist visas. Most of them were younger or middle-aged men who worked in construction or as helpers in agriculture. Since the beginning of the war in Syria in 2011, the number of Syrians living in Jordan has risen to over a million, and some of the Syrian refugees have work permits.

In addition, migrants from different countries (Eastern Europe, Morocco, Philippines) live in Jordan. Some of them – officially given an “artist” visa – came to prostitution in the country. Some of these women are victims of human trafficking. International organizations are calling for the Jordanian government to take more active action against human trafficking. 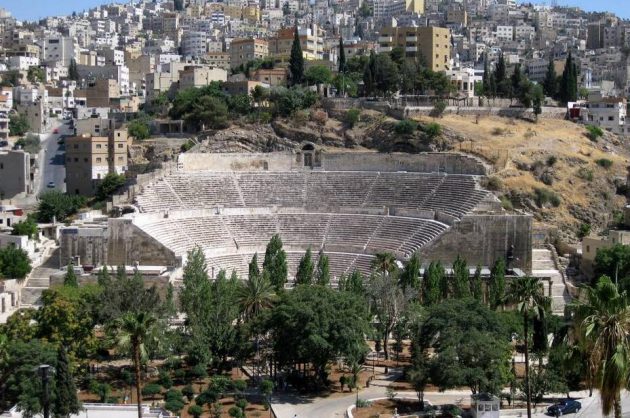 Today’s Jordanian national flag dates from 1928 and its basic structure goes back to the Arab revolt against the Ottomans in 1916, which was led by the great-great-grandfather of today’s King Abdullah II. The colors green, white and black represent the great Arab-Islamic founding dynasties: Omayyads, Abbasids and Fatimids. The seven-pointed white star on a red background symbolizes the seven verses of the “Fatiha”, the first sura of the Koran, which represent a form of creed for Muslims.

The text of the Jordanian national anthem praises the king and the Hashemite dynasty.

The national coat of arms

The Jordanian national coat of arms was originally the coat of arms of the Hashemites and in its current form dates back to 1921. The eagle and the royal crown embody the monarchy. Spearheads, curved swords, arrows and bows stand for willingness to make sacrifices and resistance. The colors of the coat of arms symbolize willingness to make sacrifices (red) and purity (white). The globe symbolizes the universality of Islam. Golden ears of wheat (right) and a palm leaf (left) mean wealth. The green, red and gold, diamond-studded Jordanian Renaissance Order (Wisam al-Nahda), first class, hangs on the ribbon. Above the order is a yellow banner with the Arabic inscription Abdullah bin al-Hussein (left), King of the Hashemite Kingdom of Jordan (center), who hopes for help and success from God (right).

The black iris is the symbol of the Hashemites, who laid the foundations for the formation of the Jordanian state from 1915/1916. The Hashemites were not Bedouins, but urban traders from the Hejaz, western part of what is now Saudi Arabia. They were responsible for the holiest places of Islam, Mecca and Medina.