The most important eras

Recent archaeological finds have shown that parts of today’s Jordan (including the Amman region) have been continuously inhabited by humans for over 10,000 years, ie since the Mesolithic period, with nomadic and sedentary lifestyles mostly co-existing. The German Evangelical Institute for Classical Studies of the Holy Land in Amman is currently carrying out a long-term research project on the history of settlements in northern Jordan together with the Biblical-Archaeological Institute.

In the Late Bronze Age (from around 1200 BC) the Ammonites, Moabites and Edomites created the first state-like structures east of the Jordan. Their struggles among themselves and against the Israelite tribes, some of which are also penetrating into the East Bank, are mentioned in the Hebrew Bible (Old Testament). Many cities that still exist today were named by name at this time, including Amman, which appears biblically under the name “Rabba” (hill). In the 8th century BC The East Bank is under the Assyrian control. From the 6th century BC The Babylonians and Persians bring the provinces east of the Jordan under their control. From the 5th century BC The Nabataeans immigrate from the south, who temporarily expand to Syria, but whose main settlement area is on Petra, Southern Jordan as well as parts of today’s southern Israel and today’s northwestern Saudi Arabia remains limited. After the Greek victory over the Persians in 332 BC. First take over the Ptolemies, then the Seleucids, power. Greek culture and Hellenistic influences spread. Magnificent cities such as Gerasa (Jerash), Pella (Tabaqat Fahl) and Gadera (Umm Qais) emerged under Seleucid rule. As a league of the Decapolis, after the invasion of the emperor Pompey into Palestine in 63 BC, they are looking for. The protection of Rome. The region only becomes officially Roman after a resolution by the Emperor Trajan. He bestows the East Bank in AD 106. the status of a Roman province with the name Arabia Petrae.

In late antiquity, today’s East Bank served the Roman Empire as a buffer zone against attacks by the Bedouins. During the Byzantine epoch, the Christian Ghassanids set the tone, ruling parts of Syria, Palestine and the East Bank from AD 490 to 636. With the Battle of Yarmuk in 636 AD, Eastern Jordan falls under the rule of Islam, initially under the Umayyad dynasty in Damascus, from 750 AD. of the Abbasids in Baghdad. The so-called desert castles are important stone evidence of this time. The crusaders invade from 1107 AD. from Jerusalem to the East Bank several times: to repel Bedouin attacks and to monitor the trade and pilgrimage route from Damascus to Arabia. Several imposing crusader castles, including those in Shobak (1117 AD), Aqaba and Kerak (1142 AD), bear witness to this era.

From 1250 to 1516, the East Bank as part of the province of Syria belonged to the Mamluks. From 1517 to 1918 it was part of the Ottoman Empire. During the rule of the Mameluks and Ottomans, Jordan served primarily as a transit area for pilgrims and merchants towards the Arabian Peninsula. The sparsely available buildings from this period indicate that the respective rulers had no interest in developing the area. That only changed with the construction of the Hejaz Railway in the 19th century. 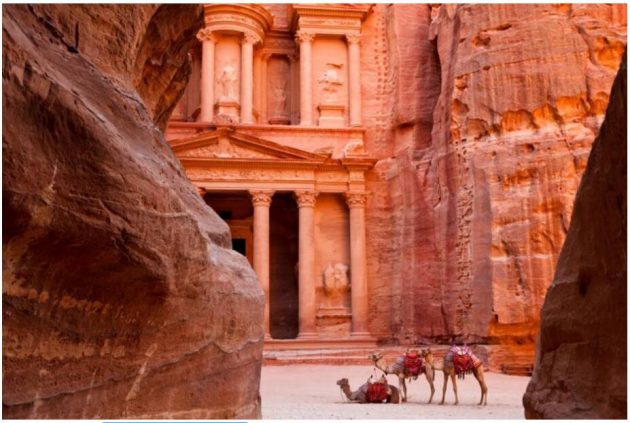 Origin and development of the modern Jordanian state

According to businesscarriers, the history of the origin of the Jordanian state is to be seen against the background of the European colonial policy of the 19th and 20th centuries. The two main actors, England and France, pushed the weakened Ottoman Empire back more and more in the 19th century and expanded their political influence in the Levant and Mesopotamia. An essential tactic was to forge alliances with dissatisfied local leaders and social groups and thus exploit them for one’s own interests.

In 1915, when the collapse of the Ottoman Empire was foreseeable, England contacted the Hashemite Sherif Hussein of Mecca, the father of the later first king of Jordan. The Hashemites fought for supremacy in the Hejaz (today’s NW Saudi Arabia) and competed with the local representatives (Wali) of the Ottoman rulers in Istanbul. England offered itself as a strong ally in this situation. The British crown gave Sherif Hussein a guarantee of gold and a kingdom of his own if he and the British took action against the Ottomans. It came to the so-called “Arab uprising” which began in 1916 and which was led by the British secret service agent TE Lawrence. Agreed to meet in parallel with this agreement, England and France also secretly in 1915 in the so-called Sykes-Picot Agreement, as they would divide the Middle East among themselves after the end of the World War and the expected collapse of the Ottoman Empire. In 1917, England declared in the Balfour Declaration that a “National Homestead for the Jews” was to be established in Palestine after the war. The newly founded League of Nations – dominated by England, France, Italy, Japan and China as well as Russia and at times also Germany – granted Great Britain in 1920 (Conference of San Remo)the mandate for Palestine including the areas east of the Jordan. The mandate areas were divided into so-called A and B areas by the mandate powers – according to the presumed ability of the local population to govern itself. Referenda did not take place.

The emirate of Transjordan

In 1921 Great Britain installed the son of the Sherif of Mecca, Abdullah Ibn al-Hussein, as emir of Transjordan. This enforced that the “National Jewish Homestead” should only be built west of the Jordan and not – as the Zionists strived for – also east of the Jordan. Great Britain agreed and in 1923 declared the previous Transjordan to be an independent emirate under British mandate administration. The emir received his salary directly from the British crown. The Jordanian Army, the Arab Legion, was paid for by England and led by the English military, first by Frederic Gerald Peake (1923-1939) and later by John Bagot Glubb(1939-1955). Because of the pro-British attitude of the ruler, Transjordan developed into a mainstay of British colonial policy in the Middle East in the 20th century.