Rainfall in Jordan is generally low and varies considerably: between 700 mm in the north and northwest and 50 mm in the south of the country. The coldest period is from mid-November to mid-February. In Amman and at high altitudes, it can snow heavily in winter. In February 2017, the snowfall was so heavy that parts of the south, including the Nabatean city of Petra, were covered with a white blanket. The “Jordan Times” published fascinating pictures on their Facebook page.

According to a2zgov, the weather and the general climate of Jordan feel most Europeans as pleasant. In the north of the country, including the capital Amman, there is a Mediterranean climate with humid, relatively mild winters and long, dry summers, which in Amman are usually relatively mild due to the altitude and the wind. Most of the rest of the country has a continental desert climate. In Wadi Rum and Aqaba, the temperatures in July and August rise to 48 degrees, but due to the dryness and the nightly cooling, the heat is easy to bear with average fitness. Exception: the Jordan Valley whose tropical-looking, hot and humid temperatures can already become so excruciating in June that many Jordanians also flee to the cooler altitudes. Excursions to the Dead Sea and the surrounding area are therefore not recommended in July and August, especially not with small children – unless you are staying in an air-conditioned hotel.

Like the whole of the Levant, Jordan is also regularly affected by the khamsin in spring and autumn, a hot, sirocco-like wind from the south-southeast, which usually only lasts one to two days, but can develop into a real sandstorm, with negative ones Consequences for the harvest. The Khamsin is heralded by falling air pressure and a cloudy sky. In the months of June to September, the so-called Shamaal, a wind from the Arab / Persian Gulf that lasts for up to 10 days, also brings increased drought and heat. After sunset, the Shamaal is often noticeable as a pleasant breeze. 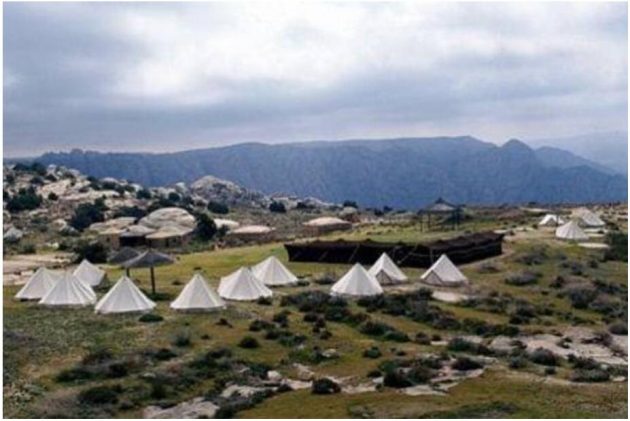 The water sector is due to the extreme water scarcity a key policy area in Jordan. The Jordanian Ministry of Water is formally responsible for water policy. Among other things, the national water strategy provides for seawater desalination to be the main source of drinking water supply in the coming years. In March 2017, the first desalination plant was opened in Aqaba, southern Jordan. Measured against the actual demand, the quantities produced there have so far been very small.

Jordan’s rivers with the greatest abundance of water are the Jordan and the Yarmuk, on the banks of which more than 3000 year old human settlements have been excavated. The Jordan(arab. al-urdunn), which gives the country its name, arises in the triangle Lebanon / Israel / Jordan from the source rivers Hasbani, Dan and Banias. It empties into the Tiberiassee (Sea of Galilee) and then flows further south, where it merges one after the other with the Yarmuk, coming from Syria, and the Jordanian rivers Zarqa and Mujib, to finally flow into the Dead Sea. In terms of its historical and political importance, the Jordan is a relatively small river that sometimes carries very little water in midsummer and autumn. During the rainy season from November to January, however, the Jordan and its tributaries can unexpectedly trigger floods that repeatedly cost people their lives and damage the infrastructure.

Since agriculture in Jordan is almost entirely dependent on artificial irrigation, the expansion of the relevant infrastructure in Jordan has been a priority for decades. Support comes from the German Society for International Cooperation (GIZ), among others.

As early as the 1960’s and 1970’s, the King Talal Dam was built north of Amman and the King Abdullah Canal, which is 110 kilometers long in the Jordan Valley, made it possible to develop large parts of the Jordan Valley for agriculture. There are now a good dozen other dams in Jordan, which are mainly intended for agricultural irrigation.

The Dead Sea is an ongoing ecological issue in Jordan. Due to overuse, less and less water has been flowing in for years, so the water level has fallen dangerously. Experts fear lasting damage to the sensitive ecosystem.

The royal nature conservation company RSCN runs numerous projects to document and protect the astonishingly diverse flora of Jordan despite the scarce water, as well as to preserve the very diverse fauna of the country. Among other things, the almost extinct oryx have been reintroduced for several years. Jordan signed the Convention on Biological Diversity in 1992 and ratified in 1,993. In 2004, Jordan ratified the Cartagena Biosafety Protocol.