The country in a regional and international context

Current are the armed conflicts in Syria, Iraq and Yemen as well as the fight against the so-called Islamic State determining factors for Jordan’s foreign policy. The relationship with Israel and the political instability in the Palestinian territories harbor a growing potential for conflict. Jordan signed a peace treaty with Israel in 1994 and both countries cooperate in a variety of ways. But the policy of the current Israeli government towards the Palestinians is causing increasing resentment among the Jordanian population. The Muslim Brotherhood in particular is loudly critical of what they see as Jordan’s growing economic dependence on Israel. The containment of protests against Israel’s policies is accompanied by increasing repression, which undermines the legitimacy of the Jordanian ruling apparatus.

According to ehistorylib, Jordan is a young nation and essentially a product of European colonialism. The Hashemites, who actually lived in the west of what is now Saudi Arabia and who guarded the Islamic sanctuaries in Mecca, ultimately owe their rise to mini-regional power to the interests of England and the USA in the Middle East. The support of the Hashemite dynasty in the Jordanian population, on the other hand, was weak for decades and only stabilized since the 1980’s.

The country owes its stability to its key regional political position and the diplomatic skills of the ruling Hashemites. In order to ensure the survival of the monarchy, they have always been dependent on skillful alliance policy and diplomacy. In terms of foreign policy, it has always been crucial for Jordan to receive political recognition and financial support from both the Arab and Western world. For example, Jordan had close ties to both Iraq and Saudi Arabia during Saddam Hussein’s rule in Iraq because of dynastic ties and economic interests.

Pro-western buffer state with its own agenda

From a Western perspective, Jordan is a buffer state, the existence of which helps minimize conflicts between the region’s main Western ally, Israel, and hostile neighbors. After King Hussein I gave up direct military confrontations with Israel in the late 1960’s, the country fully played this assigned role. Jordan’s rulers have exceptionally close ties with the United States, Saudi Arabia and Israel. Since 1996 Jordan has been officially a “Major Non Nato Ally” (MNNA), a status that means preferential access to information, training and military equipment for Jordan.

In the wake of the wars in Iraq (since 2003), in Syria (since 2011) and in Yemen, military cooperation with the West was once again expanded. Jordan was involved in combat missions against the Islamic State with reconnaissance, logistics, personnel and military equipment. The necessity of having to balance interests and powers, which are often very different, determines political strategies. On the one hand, Jordan is a firm ally of the USA: On the other hand, the power apparatus is trying to maintain close contacts with Turkey, Russia and Iran in order to prevent the conflicts from spilling over into their own country and to minimize the security risks at the northern and eastern borders of the country. 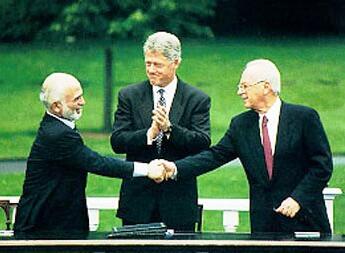 Close relations with the EU and Germany

Jordan has been associated with the EU since 2002. Against the background of the special relationship with Israel and Jordan’s mediating role in the Middle East conflict, Germany has maintained close relationships with Jordan for decades.

An academic think tank that also works on current foreign policy issues is the Center for Strategic Studies at the University of Jordan in Amman. Another think tank is the Jordan Institute of Diplomacy. An important international ambassador for Jordan is the brother of King Hussein I and former heir to the throne, Prince Hassan bin Talal. He acts as the founder and patron of the diplomatically highly located Royal Institute for Interreligious Studies. In addition, he was President of the Club of Rome and promoted numerous international peace and cultural initiatives. Prince Hassan is currently committed to more international cooperation in climate protection.

While King Hussein I made peace with Israel and at the same time obtained cheap oil from Iraq, his successor Abdullah II broke with the tradition of political double ties. From the beginning, Abdullah II oriented his foreign policy heavily towards the Western allies and towards improved relations with the Arab Gulf states. During the war against Iraq in the spring of 2003, for example, Jordan had the armies of the United States and Great Britain operate from Jordan. As part of the “war on terror”, Jordan also took an active part in the US-led global hunt for al-Qaeda terrorists.

Critics accuse the Jordanian regime of becoming one-sidedly dependent on the USA with its stronger ties to the West. But it is becoming increasingly clear that Abdullah II definitely has a vision. The monarch wants to free Jordan from the corset of economic dependency and thus gain more political freedom of action. The accelerated privatization of key companies, the establishment of tax-exempt industrial zones, the upgrading of the city of Aqaba and thus of the entire south of Jordan; the turn to less resource-intensive but financially profitable branches of the economy such as banking, transport, logistics, education and educational tourism – these are indications that Abdullah II is working towards greater economic strength and political independence in a regional context.