Scarce resources (little water, few raw materials), deficits in governance and a poorly developed industry make Jordan economically highly dependent on imports and external financial inflows. International financial aid and loans (USA, IMF, Arab Gulf states), remittances from Jordanian workers abroad (in 2019 it was about 3 billion JD / year or around 8% of GDP), tourism (10-12 percent of GDP, 50 percent of it health tourism) as well as services and phosphate exports have ensured survival so far.

It is characterized by a strong economic gap between town and country. Most of the economic activity takes place in Amman and Zarqa, with Irbid and Aqaba following at some distance.

According to ethnicityology, Jordan has been in an economic crisis not only since the corona pandemic. Real economic growth averaged 2 percent in recent years and was too low to be able to reduce the high national debt. The low growth is accompanied by high unemployment (20 percent) and low gross domestic product per capita (see structural data at the top of this page). The state-fixed minimum wage is 225 JD / month (approx. 270 euros, for foreigners 155 JD / 185 euros). Many Jordanians actually do not earn any more – with an estimated subsistence level of 500 JD per month and family and the cost of living that is in real terms at Central European levels. The average monthly wage in 2019 was less than 500 JD net (approx. 625 euros).

Public debt (2019: 95% of GDP) continues to rise. Under pressure from the International Monetary Fund, the Jordanian government wanted to increase income tax in the spring of 2018, which sparked serious unrest. Since then, parts of the population have increasingly taken to the streets to protest. In autumn 2019, teachers across the country went on strike. The Jordanian government has a reform program for the period 2018-2022 was launched, which among other things focuses on the expansion of renewable energies and budget consolidation through higher taxes and fewer subsidies. It remains to be seen whether these measures can create more jobs and bring about growth, especially in view of the corona pandemic and the associated economic losses in spring 2020. 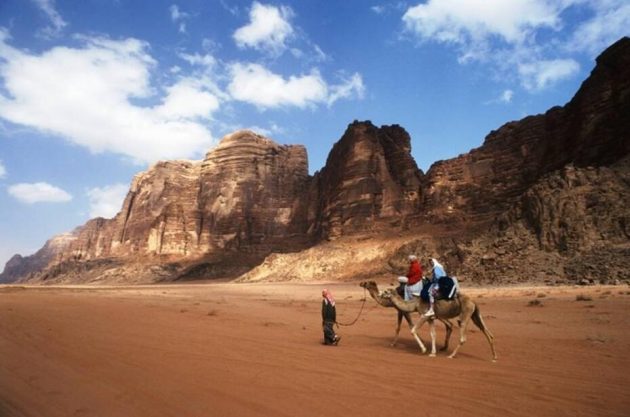 Army as a cost factor

The army is an important factor in the Jordanian budget. Jordan spends around 25 percent of the national budget on military spending. The share of military spending in GDP is around 5-6 percent. This makes Jordan one of the most militarized countries and economies in the world. A large part of the funds (90 percent) is used for personnel. It is estimated that half of all health and social insurance in the country is run through the military. The economic importance of the army is increasing, among other things because some military officers could previously buy land cheaply, which can now be sold at high profits.

Energy is an important economic factor in Jordan, because the country is 95 percent dependent on energy exports. Low-cost natural gas supplies from Egypt were halted from 2014 to 2018 due to terrorist attacks on pipelines in Sinai. Deliveries have since resumed. Jordan also covers its energy needs with liquefied gas from Qatar, oil from Iraq and Saudi Arabia, and natural gas from neighboring Israel.

In addition to structural factors, Jordan’s economy is very dependent on the respective political situation in the region. The effects are ambivalent, because as a medium-sized state, Jordan not only suffers from wars and crises, it also benefits. According to leading economists, most regional conflicts over the past seven decades have benefited Jordan and the ruling Hashemites. Jordan has become a hub for doing business with Iraq since the beginning of sanctions against Iraq in the 1990’s and since the fall of Saddam Hussein in 2003. Many import-export companies moved their base to Amman. Numerous wealthy Iraqi refugees generated revenue by buying apartments, houses and cars, putting their money in Jordanian banks, or otherwise investing in the country.

However, the crisis in Syria could change this pattern. It is true that the Syrian mass exodus, like earlier large movements of refugees towards Jordan, provided positive economic impetus. From 2011, individual Syrian refugees brought considerable sums of money into the country. One consequence of this was a real “boom” in the construction industry in Irbid and Mafraq. The bottom line is that only a small part of the Jordanian population benefited from this development. Many of them suffered losses, because the armed conflicts in Syria and Iraq have severely impaired traditional trade routes and sales markets. In addition, the presence of around 1.3 million people from Syria (more than 50% of them registered refugees) meant high levels additional pressure on the country’s already scarce natural resources (water, energy) as well as high additional public spending, especially for health care, education, general infrastructure and energy subsidies. The fact is: the state and many municipalities were – and are – overburdened. And the labor market is also affected: Since most of the refugees from Syria no longer have any savings and are prepared to work illegally and for absolute minimum wages out of necessity, the already fierce competition for jobs in Jordan has become even tougher, especially between job seekers from Egypt and Syria. The already very low wages are in a downward spiral. This also means a further weakening of the already poorly protected workers’ rights, as well as the purchasing power of already disadvantaged population groups. Last but not least, wars and terror in the region are increasingly threatening the stability of Jordan and necessitating additional spending on security and defense.

In private households, hotels, restaurants and in the clothing industry, mainly workers from abroad work. Most come from Egypt, followed by Bangla Desh, Sri Lanka and India. A good 300,000 workers are officially registered, the number of undocumented foreign workers is estimated at around 250,000. This means that there are around 550,000 foreign workers in the country. Most of them come into the country under the so-called “Kafala” system, in which the employer has to vouch for the state. This means, among other things, a strong dependency on the employer.

In Jordan there are laws that theoretically protect workers from exploitation, but in practice elementary workers’ rights are often not observed. Domestic workers, in particular, sometimes toil under inhumane conditions. The non-governmental organization Tamkeen provides help in acute emergencies and helps migrant workers in Jordan to enforce their rights.