The central European northern part of the Republic of Italy borders in the Alpine region in the west on France, in the north on Switzerland and Austria and in the east on Slovenia. The elongated central and southern part in the form of a boot consists of the Po Valley to the northeast and the Apennine Peninsula to the south, which extends far into the Mediterranean. The coastal regions border the Gulf of Venice and the Adriatic Sea in the east and the Ionian Sea in the south. The Messina Strait runs between Sicily and the Apennine Peninsula. To the west between the mainland and Sardinia, 250 km away, is the Tyrrhenian Sea, which merges into the Ligurian Sea in the Gulf of Genoa. In addition to Sardinia and Sicily, some other smaller islands in the Mediterranean are part of the 301 230 km² large national territory. See Italy country abbreviation.

The ridges of the Alps to the north often form both watershed and national borders with neighboring countries. There are about 800 glaciers in the Alps, the highest Italian mountain is the 4,634 m high Monte Rosa in the mountain range of the same name in the regions of Piedmont and Aosta Valley. A moraine hill country with lakes lies south of the mountains. The most important lakes are Lago Maggiore, which belongs to a fifth of Switzerland, Lake Como between the Lugano and Bergamask Alps and the largest inland water with 368 km², Lake Garda. The end moraine land merges into the plains of the Po and Veneto. The southern peninsula is crossed by the Apennine mountain range, which is up to 3,000 m high and separates the west and east sides of the Italian boot. The wider western coastal area has numerous bays, whereas the eastern coastal area is narrower. Rivers arise in the Fontanili zone on the edge of the Alps and the Apennines and flow to the sea. In the southern part of the peninsula there are still some active volcanoes. The most famous are Vesuvius near Naples, Etna – the highest volcano in Europe and the highest mountain in Sicily – and the Stromboli on one of the Aeolian Islands north of Sicily. The largest rivers are the 652 km long Po in Northern Italy, the 410 km long Adige in South Tyrol, the 241 km long Arno, which flows into the Ligurian Sea at Pisa, and the 405 km long Tiber, which flows through Rome and flows into the Tyrrhenian Sea at Ostia. In addition to the Alpine lakes, Italy has some volcanic lakes, the largest of which is the Trasimeno lake northwest of Perugia.

In terms of climate, Italy is divided into the Alpine region and southern Italy with its islands.

The Italian Alps are part of the Central European climate area with a humid summer climate. Mild winters and hot summers are alternated by frequent rains in autumn and spring. These basic weather parameters change in the summer-dry Mediterranean climate of the south below the latitude of Rome. Mild winters with rain combine with hot, dry summers in Sicily. Sardinia to the north also has a typical winter rain climate with hot and dry summers. Western winds dominate, so that the west side of the Apennines has consistently higher rainfall than the east side. Earthquakes occur relatively frequently.

The mean temperatures in the summer months are almost the same in comparison between northern and southern Italy, whereas in winter they show considerable differences. In Milan, not far from the southern edge of the Alps, they average 2.5 °C in January and 24.5 °C in July. Rome in the center of the southern peninsula has 7 °C in January, 25 °C in July, Palermo in Sicily 12 °C in January and 26 °C in July. Similar to the winter temperatures, the annual precipitation varies from region to region. They decrease from north to south and average 1,012 mm in Milan, 745 mm in Rome and 510 mm in Palermo.

The Italian flora can be divided into three vegetation zones: the Alps, the Po Valley and the Mediterranean Apennine Region.

In the north and in the mountains there are mainly deciduous and coniferous forest. However, clearing and cultivation of large areas have created heathlands, pasture and scrubland in many places. The Alpine region is divided into three vegetation zones according to the respective altitude. The southern pre-Alpine region of Lombardy has olive trees, cypresses and laurel trees in the area of ​​the northern Italian lakes, beech trees are located somewhat higher, which are then replaced by larch and spruce. In the high mountain zone there are juniper bushes and rhododendrons as well as slightly higher pastures with wild flowers and wild grasses. Only a few plants, including mosses and lichens, still grow above the snow line.

The lowlands around the Po were densely forested before it was settled. Today crops dominate there. Remains of the original vegetation are sedge grass in the drier areas as well as small pine forests and heather.

The southern peninsula is determined by Mediterranean vegetation levels. In the area of ​​the Apennine Mountains, which extends over the entire peninsula, holm oaks grow, in the upstream mountain area also cork oaks, chestnuts, beeches and pines. Mainly on the rainier west coasts and in the south thrive evergreen plants and maquis, which has taken the place of the holm oak forests. Olive trees, oleander plants and wild wine can also be found here. In the mountain regions further south there are still parts of the natural mountain forest with oaks, chestnut trees and poplars.

In Sicily, forest and evergreen shrubbery have largely been displaced by cultivated land, a special feature are the papyrus perennials that often occur in fresh water, which were cultivated in antiquity and used to produce mats and rafts. In Sardinia, the destruction of the once growing carob forests and the decline of olive trees have created steppe regions with various grasses that serve as pastureland. In the mountain regions there are some cork oak forests.

The wildlife of Italy has been decimated over the centuries due to the narrowing of the habitat. Marmots, rabbits, mountain partridges and stoats can be found in the Alpine regions. Capricorn, chamois and deer live on larger mammals in the region, but mostly only in nature parks. Lynxes and foxes are rarely found in the Alps, more often they are found in more remote regions of the Apennines. Birds, especially songbirds, are greatly reduced by hunting. However, eagles can still be spotted in the Alps. Salamanders and water newts live on amphibian species in Italy, and vipers are particularly common on reptiles. Brown bears still live occasionally in Abruzzo – the highest part of the Apennines.

Sardinia is home to the mouflon wild sheep, fallow deer and wild boar. Predominant freshwater fish are trout, sturgeon and eel, tuna and swordfish in the sea. There are also isolated great white sharks in the southern regions of the sea. Due to chemical residues and over-fertilization, algae growth is sometimes very high in the more industrialized coastal regions.

97% of the Italian population are native Italians. The three percent foreigners in the country are mostly immigrants from developing countries. Many of the male immigrants are black Africans, and women are a large group of Asian women. Today immigrants from Eastern Europe are the main immigration group.

According to COUNTRYAAH, 83% of Italians are Christian, the majority of them Roman Catholic. 16% are denominated; Muslims represent a growing minority.

The national language is Italian, about 1.25 million Sardinian-speaking Italians live in Sardinia. German is the second official language in the province of Bolzano and in parts of Trentino; over 330,000 citizens speak German. The Aosta Valley is French-speaking. Small Slovenian minorities live in the north, in the Trieste-Gorizia area, in the south, Albanian and Greek.

The population growth is 0.4%. About two percent of Italians cannot read and write; mostly they are African or Asian immigrants. 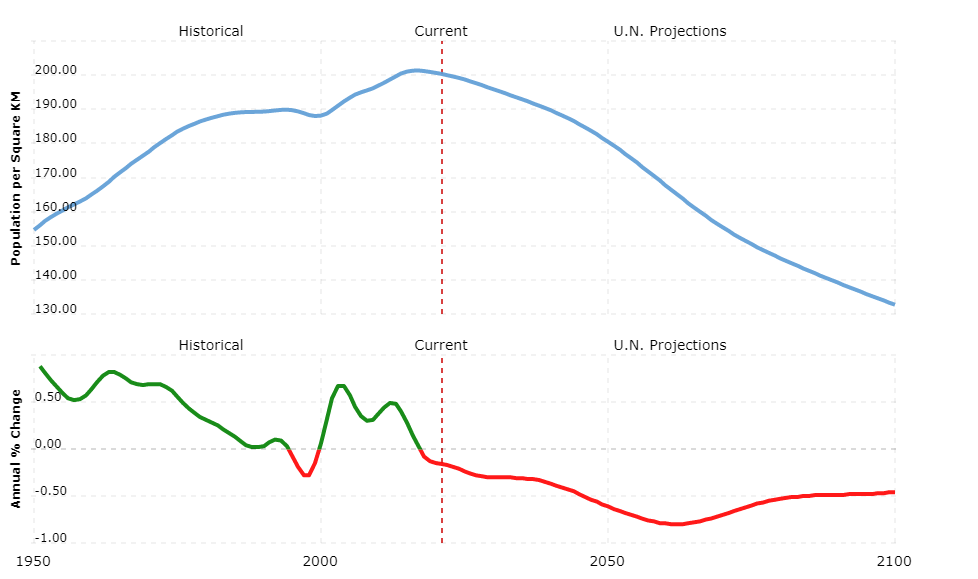 Italy has been a republic with a parliamentary democracy since 1948. The president (Giorgio Napolitano, since May 2006) is elected head of state indirectly by the parliament and three representatives of the regions for seven years. It can dissolve parliament, appoint the prime minister and influence the legislative process through a suspensive veto.

A two-chamber system forms the legislative branch. It consists of “Camera dei Deputati” (Chamber of Deputies with 630 members who are elected for five years) and “Senato della Repubblica” (Senate with 315 members elected for five years, plus currently four senators for life; as of early 2013), both have almost identical responsibilities in the legislative process. Since an electoral law reform at the end of 2005, a pure proportional representation right with majority bonus has been in force. The Senate represents the regions from which at least seven senators are sent: the exception is the Aosta Valley with one senator.

The Supreme Court is the Constitutional Court, which is made up of fifteen judges, one third of whom are elected by the President, the Parliament and the other two highest courts.

Italy consists of 20 regions (including five with special autonomy rights) and 109 provinces. The regions have their own legislative and executive bodies.

Italy is a modern industrial country. The differences between the highly industrialized north and the less developed south are large. After the global economic crisis in 2007/2008, Italy is still in recession. In 2012 the economy shrank by 2.4%, the unemployment rate continued to rise (2012 to 10.7%), as did government debt (127% of GDP in 2012).

Over half of the country is used for agriculture. Wheat is cultivated on almost 40% of the arable land, particularly in the Po Valley. Corn, rice, barley, tobacco, olives, sugar beets, vegetables and, above all, pome fruit are grown in South Tyrol. Winegrowing plays an important role in many regions of Italy. Cattle and pig breeding is also practiced in northern Italy, and forestry covers just over a tenth of the timber requirement.

The country’s most important mineral resources are coal, mercury, zinc and potassium chloride. Marble is broken in Carrara.

The large-scale industrial plants are mainly found in northern and central Italy. The clothing, wood, textile, food, shoe and furniture industries are often organized as medium-sized companies. In southern Italy there are state-sponsored partial manufacturing companies, in particular steel mills and petrochemical companies. A specialty is the silk industry in the Como area, which is based on domestic silkworm farming in Veneto and Lombardy. Also to be highlighted are the numerous handicraft businesses, particularly located in Venice and Florence. The energy supply is characterized by a very high dependency on imports, almost four fifths of the energy requirement is imported. All nuclear power plants are shut down.

Every year over 40 million tourists visit Italy, making tourism the most important source of foreign currency, especially the seaside resorts as well as Rome, Venice and South Tyrol are main travel destinations.

The most important trading ports are the oil import ports of Genoa and Trieste. The largest passenger port is Messina. Italy has 24 international airports, the most important of which are Rome, Milan, Naples, Turin, Venice and Rimini.