The state of Israel (Hebrew: Medinat Jisrael) is located in the Near East on the eastern shore of the Mediterranean. Its southern tip borders the Gulf of Aqaba, an arm of the Red Sea. Israel has four neighboring countries: Lebanon in the north, Syria in the northeast,Jordan in the east and Egypt in the southwest. The national territory has an area of ​​20 700 km² without the occupied areas and extends from south to north over a length of about 400 km.

The south of the country is occupied by the Negev, an approximately 12,000 km² desert-like table country that extends to the port city of Elat on the Red Sea. The north is divided into three areas: mountain country, Jordan ditch and coastal plain. The highlands are divided from north to south into Galilean, Samaritan and Judean highlands. The country’s foreign policy is the highlands of Galilee and a land corridor from Tel Aviv-Jaffa to Jerusalem. In the highlands of Galilee, Mount Hare Meron is Israel’s highest mountain at 1.208 m. In the east, the Galilean mountains descend to the Jordan ditch. The Sea of ​​Galilee is located on the border with Syria.

The fish-rich freshwater lake has an area of ​​166 km² and is over 200 m below sea level. The Jordan, which flows into the Dead Sea, flows through it in a north-south direction. The river forms the border with Syria and Jordan. The southern part of the river lies entirely on Jordanian territory, the part west of the river – the West Bank – has been occupied by Israel since 1967. The coastal plain has its central part in the fertile Sharon, which widens to the south to about 40 km. A hill country east of it called Shefela leads over to the highlands. The country’s largest city and capital is Jerusalem with around 680,400 residents.

Israel lies in the transition area between a winter-humid Mediterranean climate and a dry desert climate all year round. Summers are warm and dry, the average temperatures in July are 27.5 °C in the port city of Haifa and 24 °C in Jerusalem. Winter, on the other hand, is cool to cold in the highlands and mild in the lowlands. The annual rainfall in Haifa is around 660 mm, in Jerusalem about 530 mm. In the Arav valley in the southern Negev, the amount of precipitation drops to 50 mm per year.

Israel’s wildlife includes approximately 100 species of mammals and 400 species of birds. Otters, wolves, jackals, hyenas, gazelles, porcupines and hedgehogs are at home. Some animal species that were considered extinct in Israel were successfully reintroduced, such as the Asian wild ass and a special deer species. In the species-rich bird world, there are usually very rare species such as the red-winged bullfinch and the cedar ladybird. Locust epidemics occur again and again, even though the animals rarely occur in Israel itself.

The vast majority of the approximately 6.28 million Israelis live in large cities such as Jerusalem, Tel Aviv-Jaffa (360,500 residents), Haifa (271,000), Bat Yam or Holon. About 75% of the total population live in the coastal plain, the country has a total population density of 320 people per square kilometer. Around 82% of the population are Jews, 15% are Muslims. Of the approximately 3.65 million Palestinians living in Israel, the West Bank or the Gaza Strip, around 600,000 are Israeli citizens.

Russia has been the main country of entry for new citizens since the 1980s. The division into Ashkenazi from Central and Eastern Europe and Sephardim from the regions between North Africa and Iraq hardly does justice to the more than 100 countries of origin and their different languages ​​and customs. Israel also differentiates between Vatikim, the one before, and Olim, who immigrated after the state was founded in 1947. The language of instruction at schools has been Hebrew (Iwrit) since the state was founded, and Arabic is taught in Arabic schools.

The population growth in Israel is 1.2%, the average life expectancy is 79 years. According to COUNTRYAAH, 95.5% of Israelis can read and write. 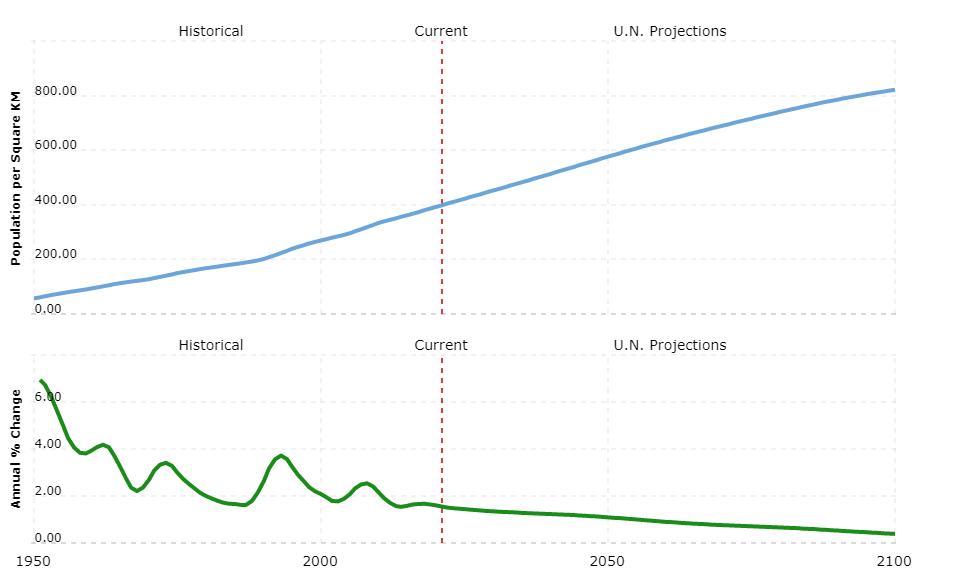 The state of Israel is a parliamentary republic. There is no written constitution, instead there are a number of adopted basic laws, and the declaration of independence also has a constitutional character.

The head of state is a president elected by parliament for seven years (Shimon Peres, since July 2007) with a primarily representative function. Legislation lies with the parliament, the Knesset, which consists of one chamber and has 120 deputies elected for four years. The executive branch consists of the government chaired by the Prime Minister (Benjamin Netanyahu, since March 2009), who is elected directly and independently of the power structure in the Knesset.

The legal system is a mixture of the British Common Law, the former laws for the British mandates and Christian, Jewish and Muslim norms.

Since its founding in 1948, Israel has undergone a rapid development from an agricultural state with socialist approaches to a market-diversified, high-tech industrial country. The country, which is poor in water and raw materials, is economically diverse and complex despite its manageable size. A modern, service and high-tech-oriented center of the country with the metropolitan areas of Tel Aviv, Haifa and Jerusalem faces a periphery in the north and south, which is mainly due to high-performance agriculture (partly still in the cooperative organizational forms of kibbutz and mozhavim) and smaller industrial companies is shaped.

In agriculture, mainly citrus fruits, olives, cotton and tobacco are grown. Cereals, vegetables and potatoes as well as peanuts and sesame are also cultivated. Most of the water required (agriculture uses 85% of the available amount) comes from the Sea of ​​Galilee. In addition to plant cultivation, there is also dairy farming and poultry farming.

Salt, copper ore and malachite are mined in the country. In the industrial sector, the building materials, electrical engineering and precision engineering industries as well as the chemical and metal processing industries predominate. Of particular note are around 650 diamond cutters, in which around half of all rough diamonds are processed worldwide. Israel’s central export partner is the United States with a third of its size, followed by China and Belgium; the import comes from the USA, China and to a large extent from the EU countries.

The main ports are Elat on the Red Sea and Haifa and Ashdod on the Mediterranean. The main airport, Ben Gurion, is near Tel Aviv.