The Iraqi Republic is located on the northeastern edge of the Arabian Peninsula and borders Turkey in the north, Iran in the east, the Persian Gulf (40 km of coastline) in the south and Kuwait, Saudi Arabia in the southwest and Syria in the west and Jordan. With an area of ​​438,317 km², the country is about five times the size of Austria. See Iraq country abbreviation.

In the east and south-east of Iraq, the historic landscape of Mesopotamia (Two Streams) lies between the rivers Euphrates and Tigris, in which in the 4th millennium BC. developed the first human advanced culture. The northern part of Mesopotamia is a steppe landscape, which turns into fertile alluvial land in the south. Coming from Syria, the Euphrates flows through Iraqi territory for a length of approx. 1,100 km and unites near the city of Al Kurnah in the southeast of the country with the Tigris to the Shatt el Arab, which flows into the Persian Gulf. The Tigris from Turkey flows through Iraq over a length of approximately 1,450 km. The two large lakes Habbaniyah Lake (350 km²) near the city of the same name and Lake Hammar in the southeast of the country are both fed by the Euphrates and now serve as reservoirs.

In the north and northeast of Iraq, the country has shares in the Taurus and Zagros Mountains, which rise to altitudes of over 3,000 m. The highest elevation in the country is the Haji Ibrahim at 3,609 m. The deserts in the west and southwest and the steppes in the northwest cover around three quarters of the country. The capital, Baghdad, is located on the Tigris in fertile two-river land.

The climate in Iraq is characterized by very hot summers and relatively mild winters. The average values ​​in July in the capital Baghdad are 34 °C, peak values ​​above 50 °C are not uncommon in summer. In January, an average of 10 °C is measured in the coastal region, around 9 °C in Baghdad and around 6 °C in the north of the country. Night frosts can also occur here. The amount of precipitation varies and is less than 100 mm annually in the desert areas, up to 1 200 mm are measured in the mountainous northeast. In the Euphrates and Tigris plains, the annual mean is 400 mm. Almost all of the precipitation falls in the winter months.

In Iraq, smaller forest areas with oak, maple, beech and plane trees can only be found in the rainy northeast. The plains and the banks of the waters are mainly lined with reeds, here you can find extensive date palm crops. Much of the country is covered by barren desert vegetation, around 5% are completely without vegetation.

Adapted animal species find a wide habitat in the sparsely populated desert areas. Hyenas, jackals, antelopes, gerbils and vultures can be found here. The reptile and insect world is rich in species.

Around 26.07 million people live in Iraq, around 40% are under the age of 15. The population density is low at around 66 residents per square kilometer. According to COUNTRYAAH, 70% of the total population live in cities, and the greater Baghdad region alone accounts for almost a fifth of all Iraqis. Three quarters of them are Arabs, the largest minority are the Kurds, who mainly live in the north, and have a share of around 17% of the total population. Smaller minorities in the country are Turkmen, Armenians, Azerbaijanis and Aramaeans.

Islam is the state religion in Iraq, 97% of the population are Muslim, almost two thirds of whom are Shiites. Religious minorities include Christians and Yazidis. The official languages ​​are Arabic and Kurdish (in the northern provinces), and various dialects are also spoken.

Life expectancy averages 69 years. Population growth remains high at 2.7%; literacy is estimated at only 40.5%, three quarters of all women cannot read and write. 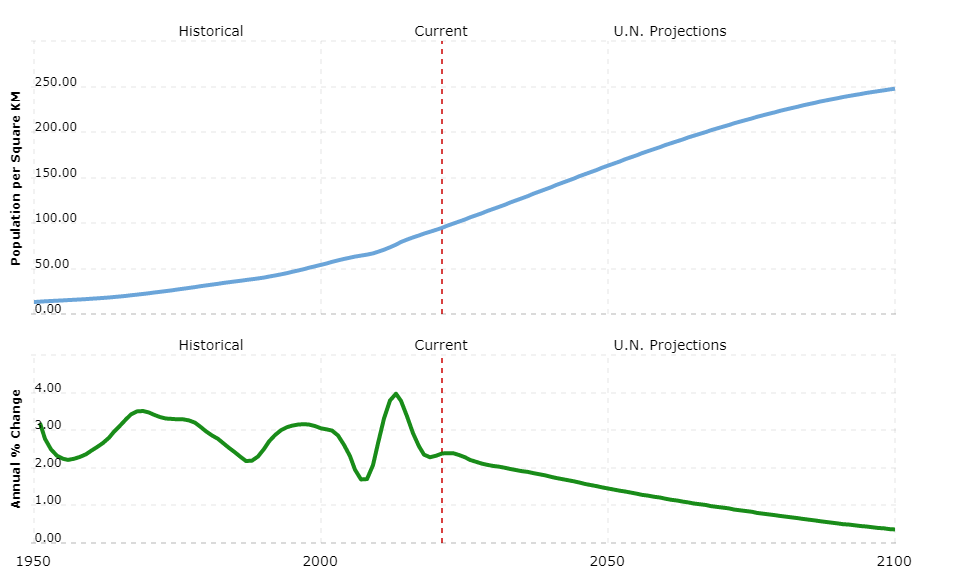 Iraq is a federal parliamentary republic under the 2005 constitution. The three-member Presidential Council consists of the President (Jalal Talabani, since April 2005; Kurd) and two Vice-Presidents. It is elected by the parliament and contains a representative of the Kurds, the Shiites and the Sunnis. The ministers were appointed by the presidential council. Prime Minister is Nuri Al-Maliki (since May 2006). The parliament consists of one chamber (Madschlis an-Nuwaab) and has 328 members, who are determined by proportional representation (25% reserved for women).

Iraq’s economy, traditionally based on oil exports, has been massively weakened by the wars since 1980 and the UN embargo (1991-2003). After the victory of the US-led alliance in 2003, most economic activities came to a complete standstill. Reconstruction was slow to get going due to the precarious security situation. Almost a quarter of the population lives below the poverty line. However, the forecast for the Iraqi economy is now relatively good.

Almost 70% of GDP is generated in the industrial sector, and here in turn it is generated centrally by oil production (99% of exports). Other mineral resources in the country are sulfur and phosphate deposits and various ores (uranium, iron, zinc, lead, chromium, manganese, copper).

The main buyers of Iraqi oil are the United States, followed by India and South Korea. The import – machines, various processed products, chemical products and food – comes from Syria, Jordan, Turkey and the USA.

There are now international airports in all parts of the country. Passenger train services between Baghdad and Basra were resumed.