The Republic of Georgia belongs to the Caucasian countries and borders the Black Sea in the west, Russia in the north and northeast, Azerbaijan in the east and southeast, and Armenia and Turkey in the south. With an area of ​​69,700 km², the country is somewhat smaller than Austria. Georgia includes the three autonomous republics of Abkhazia, Adjara and South Ossetia, which are demanding the detachment from Georgia, but are not recognized as sovereign states.

Much of Georgia is mountainous. In the north, the main ridge of the Greater Caucasus forms the border with neighboring Russia. The highest peak in Georgian territory is the Schara at 5.201 m, the second highest is the extinct volcano Kasbek at 5.033 m. The Little Caucasus runs in the south of the country, reaching heights of up to 3,000 m in Georgian territory. The Surami Mountains connect the Little and the Greater Caucasus. Between these two lies the Transcaucasian Valley with the Colchian Plain. Numerous rivers run through the valley, among them the Kura (Georgian: Mktvali) as the longest river in Georgia (total length 1,364 km, in Georgian territory approx. 350 km) and the Rioni.

The capital Tbilisi (Georgian: Tbilisi) is located in the east of the country on the Kura.

The subtropical climate prevails on Georgia’s Black Sea coast and in the coastal regions. The average January temperature is 4 °C, in July 30 °C. The annual rainfall is between 1,000 mm in the lower regions and 2,000 mm on the western slopes of the mountains.

Continental climatic influences dominate in the eastern part of the country. The annual rainfall is less (approx. 500 mm). The mean January temperature is around freezing, the temperatures can drop to -23 °C. The average July temperature is over 30 °C, often reaching 40 °C.

Almost 40% of the country’s territory is forested. The tree species differ depending on the region and altitude. The deciduous forest in the mountain regions with oaks, chestnuts and beech trees changes into coniferous forest from a height of approx. 1 900 m; spruce, fir and pine dominate here. Alpine mats grow above approx. 2,200 m. Subtropical species such as cypress, eucalyptus, bamboo and citrus trees can be found in the Colchian lowlands. In the eastern part there are dry forests with pistachios and juniper. Swamp landscapes can be found along the rivers. Many of the approximately 13,000 plant species in Georgian territory are endemic and only occur here.

The forests of Georgia offer a suitable habitat for a large number of animals. For example, brown bears, wolves, lynxes, chamois, bezoars, ibexes and the Caucasian auroch live in the mountains. Typical mountain bird species include the Caspian pheasant and the geese and lamb vultures. Deer, the Caucasian deer (Mamal), wild boar and squirrels live in the lower regions.

A total of around 4.68 million people live in Georgia. Around 70% of them are Georgians (mostly followers of the Christian Orthodox Church), approx. 8% Armenians, 6% Russians and Azerbaijanis each, half as many Ossetians and almost 2% Abkhazians. Check ALLCITYPOPULATION to see other large cities in Georgia by population.

After Georgia’s declaration of independence in 1991, there were partially armed conflicts between the central government and some minorities, demanding that their territories be detached from Georgia. The West Caucasian Abkhazians, who are predominantly Muslims, live in northwestern Georgia and founded an autonomous republic (around 525,000 residents) in 1992 with the capital Sukhumi. A large part of the Georgians, who up to this point represented around half of the population in this area, fled from this part of the country. The Georgian central government in Tbilisi rejects the independence of the Autonomous Republic of Abkhazia.

The Autonomous Republic of Adjara with the capital Batumi is located in southwest Georgia. The approximately 377,000 residents, the vast majority of Adjara, are mostly Sunni Muslims.

The autonomous region of South Ossetia (over 85,000 residents) with the capital Zchinwali, in which almost half of the population lives, is located in the Central Caucasus and is striving to unite with North Ossetia, which is part of Russia. The Ossetians, who have a population of around 66% here, are an Iranian people and predominantly followers of Orthodox Christianity.

According to COUNTRYAAH, 90% of the total population of Georgia live in the Transcaucasian valley, more than 60% of them in cities. By far the largest city in the country is the capital Tbilisi (Tbilisi) with around 1.25 million residents (agglomeration), which corresponds to over a quarter of the total population. Other large cities are Kuataisi (around 185,000 residents), Rustavi (116,400), Batumi (around 121,800) and Sukhumi (around 82,000).

The official language is Georgian, in addition to Russian, the languages ​​of the other ethnic groups are also spoken.

The average life expectancy is 76 years, and population growth is negative due to emigration (-0.35%). School attendance is compulsory for children between the ages of six and 14. Literacy is very high at 99%. 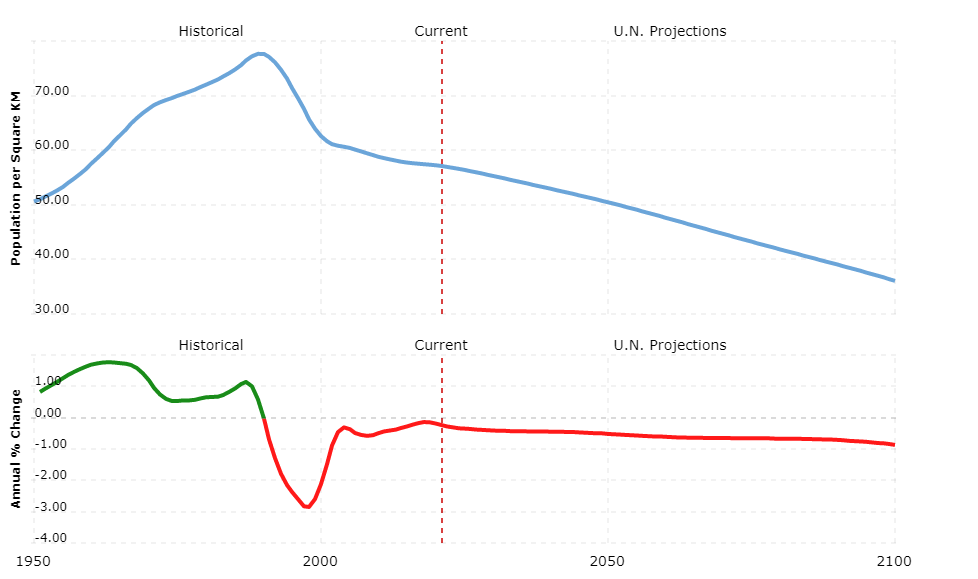 The legislature lies with the parliament (Sakartwelos Parlamenti), which consists of a chamber with 150 seats. The people are elected by the people for a term of four years. The main parties are the Georgian Dream Alliance, the United National Movement, the United Opposition, the Labor Party and the Christian Democratic Party.

Georgia is divided into nine districts, a capital district and an autonomous republic (Adjara). Abkhazia and South Ossetia are effectively outside Georgian control.

Until 1991, Georgia was one of the wealthiest Soviet republics. After independence and the collapse of the Eastern Bloc markets, the country’s economy was on the verge of ruin. Added to this were the civil war-like conditions in the breakaway parts of the country and the war between Georgia and Russia in 2008. Industry was particularly affected. Today the country is experiencing high growth rates again. Despite this, large sections of the population, particularly in rural areas, suffer from poverty, underemployment and unemployment.

Agriculture is becoming less important; In 2006 only 9% of the gross domestic product (GDP) was generated here. The most important agricultural areas are in the transcaucasian subsidence zone and in the colchis. For export, tea (above all, Georgia as a Soviet republic covered over 90% of Russian needs), wine, citrus fruits and vegetables are grown. Mulberry trees are grown for the breeding of silkworms. Agriculture cannot meet the demand for basic foodstuffs, they have to be imported. Livestock farming (sheep, goats) is also important.

A clear upward trend has been observed in other areas since 2004: The service and banking sectors in particular, as well as the construction industry, are becoming increasingly important. The share of services in GDP was 68% in 2012, that of industry 23%.

In terms of mineral resources, Georgia has deposits of hard coal, copper, barite, zinc, oil and natural gas, and above all manganese. The country’s energy requirements cannot be met with its own raw materials. Many companies in the heavy industry that had emerged under Soviet leadership had to close in the first half of the 1990s due to the loss of cheap raw material imports, the outdated plants and the lack of competitiveness. In addition to metal processing and mechanical engineering, food production and mining are the most important industries today.

The main export goods of Georgia are vehicles, metals and metal products, food and beverages and chemical and mining products. The main customers are Azerbaijan, Turkey and Armenia. Above all, petroleum and fuels, vehicles and machines, food and medical supplies are imported. The most important suppliers are Turkey, Ukraine and Azerbaijan.

Almost 19,000 km of the approximately 20,000 km of the road network are paved. The rail network covers a good 1,600 km. There are international airports close to the capital Tbilisi and in Batumi (Adjara). The main ports in Georgia are Batumi in the south and Sukhumi in the north.