The Republic of The Gambia (officially: Republic of the Gambia) is located in West Africa and is the smallest country on the African continent with an area of ​​11.295 km².The Gambia borders Senegal in the north, east and south, and the Atlantic in the west.The country extends as a narrow strip on both sides of the river of the same name, the west-east extension is approximately 340 km, the maximum width of the country is 50 km. The coastline is 80 km. See Gambia country abbreviation.

The Gambia is mostly flat, in the west there is a hilly landscape, here heights of up to 200 m are reached. The Gambia River and its numerous tributaries determine the country’s landscape. The Gambia originates in northern Guinea and is around 1.5 km wide inland. Before it flows into the Atlantic, its river bed widens to a width of 11 km, but narrows to 5 km shortly before the mouth. In the bank area, the soil is predominantly marshy, the adjacent lowlands are regularly flooded; these alluvial soils are the main cultivation area of ​​the Gambia. This does not apply to areas where the deposits are saline (due to the tides). The capital Banjul is located on a peninsula at the mouth of the Gambia.

The climate in The Gambia is subtropical, characterized by a rainy season from June to October and high temperatures all year round. The amount of precipitation in the coastal areas is higher than inland, with an average of 1,000 to 1,500 mm. In the capital Banjul, the mean January temperatures are 23 °C, in July 28 °C. During the dry season, the Harmattan desert wind often blows, bringing dry air and dust from the Sahara.

Mangroves dominate in the mouth of the Gambia (up to approx. 100 m upstream). Towards the interior follow fresh water swamps, dense shrub growth and oil palms. The somewhat higher bank areas are grasslands with isolated groups of trees (baobab and carob tree, cedar, mahahgoni). With decreasing rainfall, the vegetation in the east of the country gradually changes into dry savannah.

The wildlife of the Gambia mainly includes the species typical of African river landscapes, which in addition to the numerous fish species include crocodiles, hippos and numerous insects (tsetse fly, mosquito). In addition to antelopes, warthogs and monkeys, leopards, hyenas and jackals also live in the grasslands. There are also endangered animal species such as the red colobus, the African wild dog and the red-fronted gazelle. The Gambia is home to more than 400 different species of birds, including falcons, swallows, herons, ringed plovers and kingfishers.

The population of The Gambia comprises around 1.35 million people who belong to different ethnic groups. The largest group are the Mandingo with a share of 42%, followed by the Fulbe (18%), Wolof (16%) and Diola (10%). The official language English is spoken by about half of the population, other languages ​​include Manding, Wolof and Ful. Around 90% of the population are followers of Islam, and around 9% are Christians. The capital Banjul has approximately 34,000 residents; the largest city is Serekunda with 322,400 residents.

Almost half of the Gambian people are under 15 years old. Life expectancy for women is 57 years, for men 53 years. According to COUNTRYAAH, population growth is estimated at 2.8%. There is no compulsory schooling in the country, literacy is a low 40%. 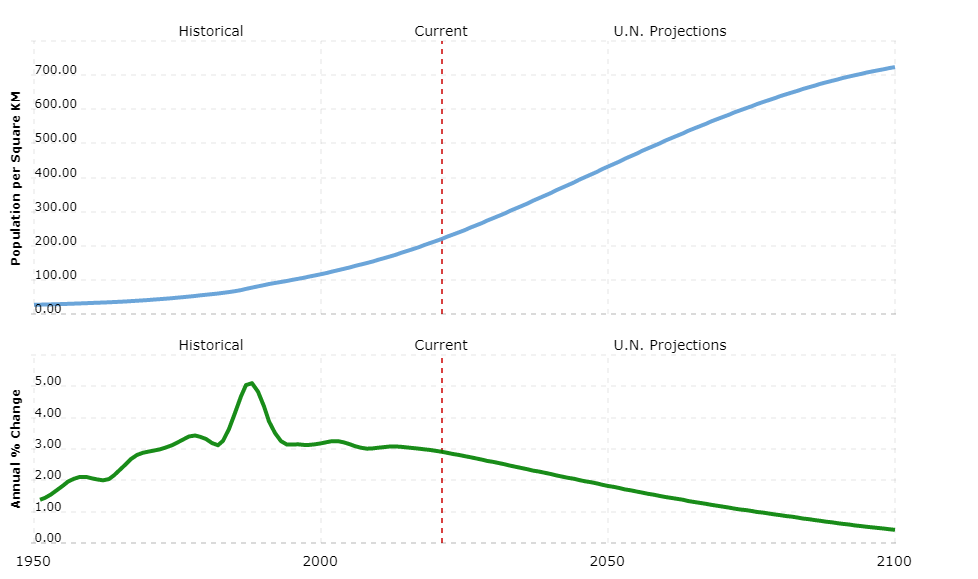 The Gambia is a presidential republic in the British Commonwealth of Nations according to the 1997 constitution. The head of state and head of government is the president (since January 1994 the former chief of the military junta, Yahya Jammeh), who is elected by the people for a term of five years (re-election possible).

The legislature lies with the parliament, which consists of a chamber (national assembly) with 53 seats. Of these, 48 are directly selected for five years, five are appointed by the President.

The case law is based on British and Islamic law (Sharia).

The Gambia is divided into six districts (divisions) with a total of 35 districts.

Despite extensive development aid, the Gambia is one of the poorest countries in the world. The domestic economic situation has stabilized in recent years, but the upswing is not reaching the majority of the population. Widespread poverty, high population growth and heavily indebted public budgets are the greatest challenges.

Agriculture, which employs almost four fifths of the Gambians, accounts for one fifth of the gross domestic product (GDP). The main crops are peanuts and cotton (export goods) as well as rice, millet, sorghum, cassava, corn and palm kernels. In addition, citrus fruits and vegetables are cultivated. Livestock breeding (cattle, sheep, goats, poultry) is important for the population’s own needs, animal skins are processed and exported. The income from fishing serves to cover own needs, fish and fishery products are also export goods. Due to the high population growth, food must be imported.

The industry has developed slightly in recent years and now contributes 13% to GDP. Mainly, they are companies that process peanuts, animal skins and fish. There are also wood and textile processing companies. The energy requirement is covered by smaller diesel power plants.

The Gambia primarily has to import food, as well as practically all factory products and fuels – especially from China, but also from Senegal and Great Britain. The export of peanuts and peanut products, fish products and cotton goes to Thailand, Great Britain, France and India.

Tourism is an important source of foreign exchange income.

The road network covers a total of around 3,700 km, of which around 700 km are paved. Almost 400 km of waterways can be used for inland navigation. The capital Banjul on the Atlantic coast is an important seaport in West Africa. There is also an international airport nearby.