The Gabonese Republic (official R¨¦publique gabonaise) is located on the west coast of Africa at the level of the equator. The country has borders with Equatorial Guinea and Cameroon in the north and the Republic of the Congo in the east and south, with the west coast it borders with the South Atlantic Ocean. The country covers 267,667 km², which is half the size of France, Gabon’s largest trading partner.

Geographically, a coastal strip and a mountain country over 1,000 m high can be distinguished. The coastal area is 200 km wide on average and is heavily divided by lakes and lowlands. To the north is Cape Lopez, which protrudes far into the sea, as well as a peninsula called Estuary of Gabon (Estuary: Latin for estuary, which was expanded in a tube shape under the influence of tidal currents). In this area lies the country’s port and capital, Libreville, which is also the country’s largest city with around 540,000 residents (agglomeration). In the southern coastal area there is a spit coast with sections of sea that are almost completely enclosed by the surrounding land.

The inland mountains rise to a height of over 1,000 m and are largely covered with rainforest. The main river and waterway in Gabon is the 1,200 km long Ogowe, which forms a kind of central axis of the republic with its numerous tributaries. It originates in the neighboring country of Congo and flows into the Atlantic. South of the river rises the mountains of the “Massif du Chaillu”, in which Mont Iboundji (1,575 m) is the highest mountain in the country.

The whole country has a hot tropical rain climate all year round, which is accompanied by high humidity (average 83%). The rainy seasons are between the months of October and May, and a dry season follows from mid-May to mid-September. The mean average temperatures in the capital Libreville are 24 °C in January and 28 °C in July, the average annual rainfall is 2 500 mm. The precipitation decreases towards the south and east, in the northwest the average values ​​rise up to 4,000 mm. The northeast is a special case with year-round rainfall.

Originally, 75% of the country was covered by tropical forests. However, the rainforest has been cleared mainly in the more densely populated and more heavily used west, in these regions there are secondary forests in addition to plantations and arable land. The regions that are still overgrown with rainforest are very diverse with around 3,000 plant species. About 15% of the country is made up of wet savannas, and there are dry savannas in the southeast. With the exception of the central part of the country, the vegetation zone in the tidal area of ​​the flat coasts is characterized by mangrove forests.

In particular, those parts of the country that are still covered by rainforest represent a habitat for numerous animals. These include various species of monkeys and, above all, gorillas that live in small groups as herbivores in the forests. Numerous tropical birds, insects and spiders as well as smaller mammals live in the forest areas. The savannas offer a suitable habitat for jackals, hyenas, buffalos, elephants and antelopes.

About 40 tribes live on the territory of Gabon, which can be linguistically divided into ten sub-groups. The approximately 1.32 million residents speak all Bantu dialects, the official language French is spoken by a good third of the population and read by around a quarter. A specialty are the few thousand member pygmies, who live in the tropical rainforests of Gabon and make up just under 1% of the population.

According to COUNTRYAAH, three quarters of the approximately 85% Christians belong to the Roman Catholic faith. Only a very small percentage of Gabon’s residents are officially followers of traditional folk religions, but many people practice indigenous and Christian beliefs in parallel. Muslims who have immigrated from other African countries make up only a small minority.

The population grows by an average of 1.5%, although at 7.9% a very high percentage of the total population is infected with HIV / AIDS. The life expectancy is therefore just under 56 years. A good 63% of Gabonese can read and write. 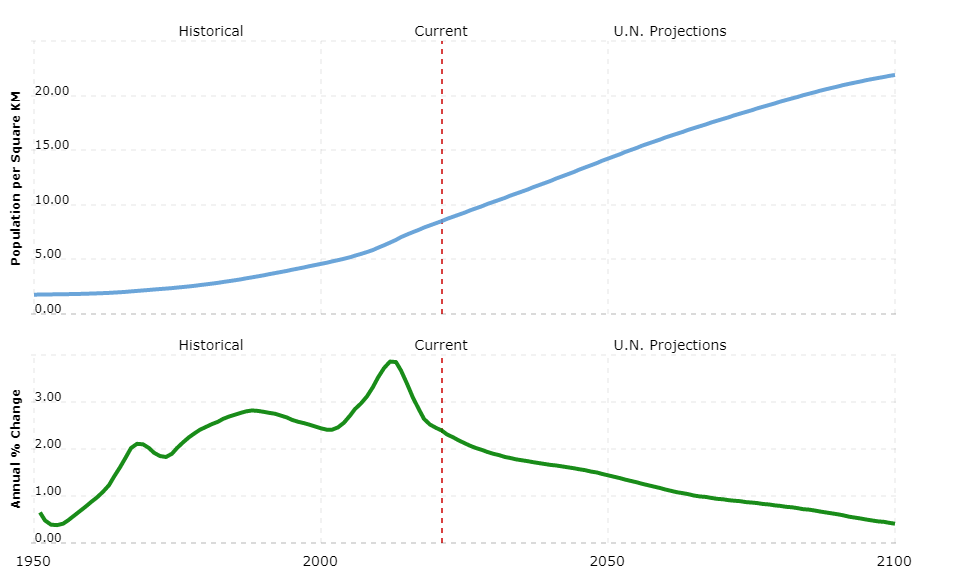 According to the 1991 constitution, Gabon is a presidential republic with a multi-party system. The head of state with extensive powers is the president, who has been directly elected by the people for seven years (Ali Ben Bongo Ondimba, since October 2009). He exercises executive power with a Prime Minister appointed by him (Daniel Ona Ondo, since January 2014) and the cabinet.

The legislative branch is divided into two. It consists of a senate with 91 senators elected indirectly for six years and a national assembly, the 120 members of which are directly elected every five years.

The country’s highest court consists of three chambers, the legal system is based on French civil law.

Gabon’s economy is dominated by the private sector. The privatization of state-owned companies was initiated in 1995. As part of the French franc zone, the country was able to secure relatively high economic and political stability for the region. Its economy is more closely tied to Europe and the United States than to the surrounding countries, with good economic ties with Cameroon being an exception. Nevertheless, a third of the population lives in poverty, and the country is very dependent on oil revenues and the dollar exchange rate.

Almost four fifths of the workforce is employed in agriculture, which, however, only generates 4% of the gross domestic product (GDP). Cocoa, coffee, oils, sugar cane and rubber are exported. Despite the downward trend, the timber industry continues to be an important economic factor, as it can make use of tropical timber that is still available.

Oil is extracted off the coast off Port Gentil, but also onshore. The country is also one of the world’s leading manganese exporters. However, the poor infrastructure poses a major problem for the effective exploitation of the existing deposits. For example, only 840 km of the 8,500 km road network are paved and there is a lack of funds to change this situation quickly. In view of this fact, the Trans-Gabon railway built in the 1980s is a particularly important transport route, but the Ogowe River is also of great importance as the most important waterway. Libreville and Port-Gentil are the most important seaports, here (besides Franceville) are also the country’s international airports.

The most important trading partners for imports (mainly machinery, food and consumer goods) are France, the USA and Great Britain, for exports the USA, France and China.

The currency is the African CFA franc.