French military intervention and start of the MINUSMA mission

Since January 2013, the conflict has experienced significant internationalization. After the Ansar Dine captured the central Malian city of Konna, President Traoré asked France for military support and declared a nationwide state of emergency. Shortly afterwards, French units on the side of the Malian army began to intervene in the fighting. They prevented a feared advance of the rebels on the strategically important city Sévaré and began with the massive bombing of positions and supply camps of the rebels. French special forces played a major role in the preparation of the military intervention who had been operating in Mali since autumn 2012. Shortly after the French intervention began, Islamist terrorists attacked a gas field in southern Algeria and demanded an end to the intervention. The attack claimed dozens of victims (including numerous citizens of Western countries).

At the end of January 2013, the French troops, who were technically superior in terms of weapons (up to 4,500 soldiers at the height of the intervention), supported by Malian soldiers, recaptured the regional capitals of Gao and Timbuktu from the Islamist rebels within just one week. The latter did not offer any resistance worth mentioning and retreated mainly to the remote mountains of northeast Mali. The advancing troops were hailed as liberators by the vast majority of the local population. However, there were also looting and brutal acts of revenge on the collaboration with the rebel accused, whereupon numerous members of light-skinned ethnicities fled. Human rights organizations also accused the Malian army of torturing and murdering suspects. After Gao was retaken, Chadian and Nigerien troops initially took control of the city, which, despite the presence of hundreds of European soldiers, has remained the target of rebel attacks and attacks until recently. According to mysteryaround, Mali is a country located in Western Africa.

As the last major city in northern Mali, French troops also occupied Kidal and Tessalit without a fight. In contrast to the previous military operations, no Malian troops took part in the capture of Kidal. The MNLA had previously warned several times of possible “retaliatory actions by the Malian army against the Tuareg population” in Kidal and threatened that they would not tolerate any Malian troops in the city. This was initially by French and Chadian units occupied and later handed over to the MNLA by the French army. The rebel group pursued the goal of gaining control over large parts of northern Mali with French tolerance, in order to then start negotiations with the government from a position of strength. France acknowledged that it had a “functional” relationship with the MNLA, which meant that the MNLA only regained limited military importance. Working together with the MNLA and Chadian units, the French troops managed to largely conquer those inaccessible mountain areas between Kidal and the Algerian border, which were the last strongholds of the Islamist rebels who may have held a group of French hostages there. In conquering the rebel stronghold and freeing the hostages, the French army relied on cooperation with the MNLA as a declared opponent of the Malian government, to whose support the French troops are officially in the country. In northern Mali, on the other hand, the MNLA can only count on a minority among the multiethnic population, in which Tuareg only make up around 30% of the total population.

At the beginning of 2013, France announced a partial withdrawal of its troops from Mali. At the same time, the French President described a Franco-Chadian offensive in the Ifoghas Mountains that was ongoing at the time as the final phase of the French intervention. Chad also began withdrawing its combat-experienced troops in April 2013, which were of vital importance to the French army in the fighting in northern Mali. The further fight against the rebels and the securing of the recaptured areas should be carried out by the Malian army and troops from African states, as part of the International Assistance Mission for Mali(MISMA) are to be continued. In April 2013 the UN Security Council decided to send a peacekeeping force comprising 12,170 soldiers and 1,720 police officers to Mali (MINUSMA) in June 2020. Their deployment began in mid-2013, integrating a large part of the MISMA troops. However, MINUSMA had significantly fewer soldiers than planned for a long time, among other things because Nigeria withdrew a large contingent from Mali in 2013 to fight the Islamist Boko Haram in northeastern Nigeria. The MINUSMA mission is one of the most loss-making UN peace missions. In June 2020, the UN Security Council decided to extend the MINUSMA mission again for another year. This has been increasingly extended to the conflict zones of central Mali since 2019.

With the mediation of Burkina Faso, the Malian government started negotiations with the MNLA and the Haut conseil pour l’unité de l’Azawad, founded in mid-2013, on a peaceful settlement of the conflict. The negotiations resulted in the signing of a peace agreement in June 2013. However, important issues, in particular the disarmament of the rebels and the prosecution of war crimes, still had to be negotiated. Since then, however, the negotiations between the conflicting parties have made little headway and the situation in large parts of the country has remained tense. Various rebel groups have become more active again, and the MNLA also signed a ceasefire with the government at the end of 2013 canceled. As part of Operation Barkhane, which began in 2014, around 1,600 French soldiers are stationed in Mali. In view of the escalating security situation in the border triangle of Mali, Burkina Faso and Niger, the French government decided in February 2020 to increase the number of troops deployed in Barkhane by 600 soldiers to a total of 5,100 soldiers.

The conflict escalated again in mid-2014 when the then Prime Minister Mara Kidal visited. MNLA rebels took dozens of hostages in the city and many soldiers and rebels died in rebel attacks. A subsequent counter-offensive by army units ended in disaster for them. In the following weeks, large parts of northern Mali again fell under the control of various rebel groups. Primarily in response to the army disaster, a Tuareg militia, the GATIA, was founded in August 2014 to fight for the preservation of national unity. The establishment of GATIA, which some analysts have close ties to the Malian army say, reflects the division of the Tuareg population in the North Mali conflict. In November 2019, GATIA replaced its founder and previous commander El Haj Ag Gamou, who is also Army General, with a new commander. This led to speculations about a possible rapprochement between the GATIA and the CMA, which is hostile to it. 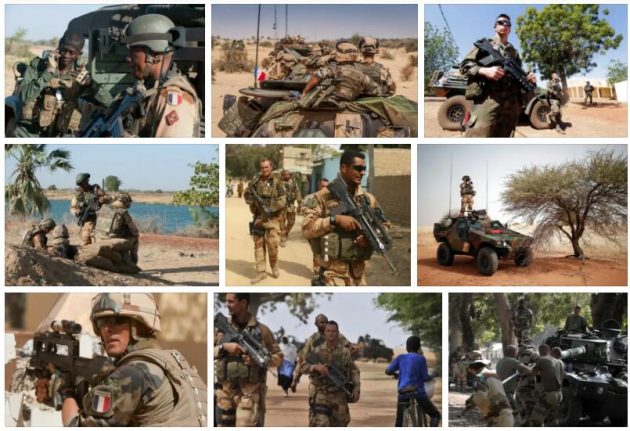 The widespread desolate state of the army and the considerable land gain by the rebels weakened the government’s negotiating position in the peace negotiations with the rebel groups that began in Algiers in July 2014. In February 2015, the conflicting parties agreed a ceasefire. In March 2015, the government and some rebel groups signed a peace agreement. However, the MNLA, which is part of the Coordination des Mouvements de l’Azawad (CMA), and its allies refused to sign the agreement on the pretext of wanting to consult their base. In the weeks that followed, the fighting flared up again. GATIA sold the MNLA from its formerStronghold of Ménaka and brought the MNLA a heavy defeat.