The Republic of Finland (officially: Suomen Tasavalta, in short: Suomi) is located in Northern Europe and borders on the Bothnian and in the South on the Gulf of Finland, both of which are part of the Baltic Sea. In the east, the country has a 1.313 km border with Russia,the northern border with Norway is 729 km long. The country borders Sweden to the west (568 km). At 338 145 km², Finland is about the same size as its Norwegian neighbor in the north, with the land area increasing by around 10 km² annually due to the decline in glaciers.

Finland can be divided into four major landscapes: Finnish Lapland in the north, which occupies about a third of the country’s territory; the Finnish lake district in the center and south; the coastal plains on the Gulf of Finland and the Gulf of Bothnia and a skerry belt made up of small rocky islands off the mainland.

Finnish Lapland is located north of the Arctic Circle and is part of the Lapland region, which spans the territories of Russia, Sweden, Norway and Finland.

Large parts of Finland are forested. There are over 55,000 lakes in the country. The largest of these is the Saimaa in southeastern Finland with 1,460 km², the second largest of the Päijänne in southern Finland with 1,090 km². The lakes are connected by waterways and rivers and make up about a tenth of the country’s area. Lakes, rivers and swamps are the result of the glacier landscape that represented Finland today in the ice age. The southern part of the country is flat. Higher regions can only be found in the center, where the central Finnish highlands between Lapland and the Lake District reach up to 492 m and in the extreme northwest, where the Haltiatunturi rises, which is the highest mountain in Finland at 1,328 m.The wide belt of archipelago islands, which is off the Finnish coasts, is particularly strong in the southwest.

Cold snowy winters and moderately warm summers correspond to a continental climate with subpolar features. Lapland north of the Arctic Circle in particular has extreme climatic conditions. The temperatures here can sometimes drop below -30 °C. The snow only melts in the very short summers and in the months of May to July the temperatures can rise to a maximum of 27 °C. The Lapland city of Inari has mean temperatures of -13.3 °C in January and 13 °C in July. In regions beyond the Arctic Circle, the sun remains above the horizon at midnight in the summer due to the ecliptic (midnight sun).

Further south, the temperatures are less extreme. In the Baltic Sea city of Helsinki in January they are around -6 °C and in July around 17 °C. The harsh winters cause the coastal waters to ice up from January and there is an ice connection between the mainland and Åland Islands.

On the stone base of the Baltic Shield, consisting of granites, gneisses, mica slate, limestone and quartzites, there is only a thin layer of soil on which extensive forest areas, which occupy about two thirds of the country’s area, thrive. Finland is the most forested country in Europe. In addition to spruce and pine, individual deciduous trees such as various types of birch, aspen and willow grow under the boreal coniferous forest. Tundra vegetation can also be found on the permafrost in the polar region in the far north of Finland. This consists of dwarf shrubs, mosses and lichens, as well as willow species and heather. Almost a third of the country’s surface has been swamped, partly crippled forests grow on the acid soil.

Finland has a rich fauna. Gulls and terns breed on the numerous islands off the mainland. Duck species can be found on the freshwater lakes. Native bird species include jays, wagtails and eagles (in the north). Numerous migratory birds nest in Finland and migrate to the warmer south in winter. The deep forests are inhabited by bears, moose, wolves, lynxes, wolverines (a species of marten) and by the most famous animals in Finland, the moose. The reindeer, which were once free to live mainly in Lapland, are domesticated. The fish-rich northern rivers are home to salmon, trout and carp species. The most common type of fish in the waters of the Baltic Sea is herring, pike, char and perch, and lobsters in summer.

The country’s main religion is Christianity, to which 89% profess, of which the vast majority belong to the Finnish Evangelical Lutheran Church. 10% are non-denominational, 1% belong to other denominations. The official language is Finnish, which belongs to the group of Finno-Ugric languages. Finno-Ugric dialects are also spoken in north-west Sweden, Siberia and Hungary. The 26,500 residents of the Åland Islands have Swedish as their official and school language.

The population grew by 0.4% and life expectancy averaged 78.4 years. 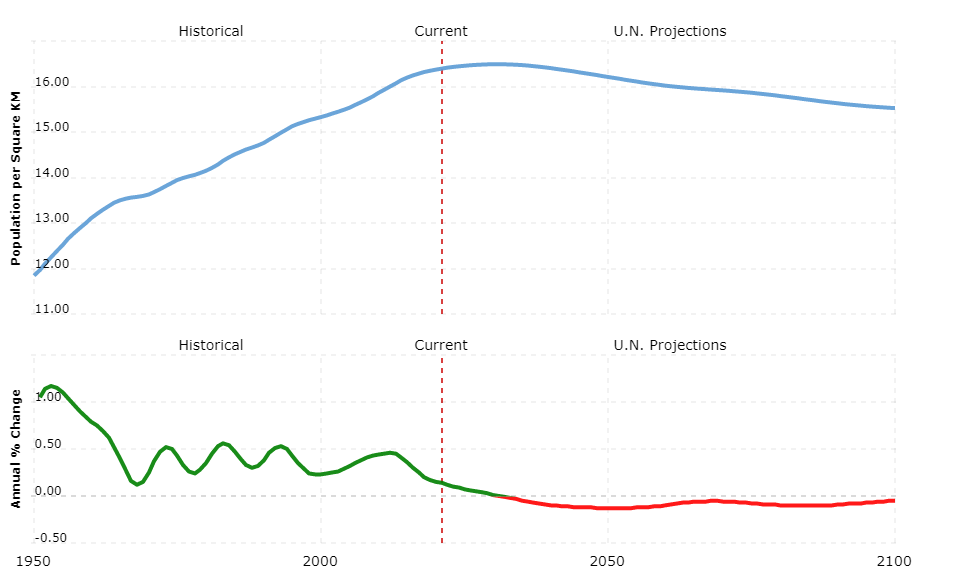 Finland is a parliamentary republic according to the 2000 constitution. The state president (Sauli Niinistö, since March 2012) is directly elected by the people every six years. He appoints the State Council as government, which is headed by a Prime Minister (Jyrki Katainen, since June 2011). When forming a government, he is bound by the vote of the group chairmen and exercises his foreign policy competences in agreement with the government. He is also commander in chief of the armed forces. The new constitution has strengthened the roles of parliament and defense minister.

The legislature lies with the Reichstag. It has 200 members who are elected for four years each. The most important parties in Finland are the Center Party (KESK), the National Collection Party (KOK), the Social Democratic Party (SDP), the right-wing populist party “The Finns” (PeruS), the Left Association (VAS), the Green Party (VIHR) and the Swedish party People’s Party (SFP) and the Christian Democrats (KD).

The administration of Finland is divided into five provinces and the autonomous province of Åland.

Finland is a highly industrialized country, largely organized according to free market criteria. With the accession to the EU in 1995, the country opened up new economic markets.

The most important sector of the economy is the service sector (68% of GDP) with 71% of the workforce.

Due to the climatic conditions, agriculture is limited to the production of basic food. Only about 7.5% of the country’s area is primarily used for growing potatoes, fodder beet, oats, wheat and barley. Forestry in particular is an important source of extra income for the rural population. Dairy farming is of paramount importance; reindeer and fur farming is practiced in Lapland. Agriculture only brings in 3.3% of gross domestic product (GDP).

Industry contributes around a third of GDP. The construction industry in particular has seen an upswing. Other key industries are wood and metal processing, mechanical engineering, telecommunications and electronics. Rich deposits of iron, copper and nickel in Lapland as well as zinc, titanium, lead, vanadium, chromium and cobalt ores also in other regions of the country are an important source of income. Pyrite, selenium, asbestos and peat are also mined.

The main seaports are Helsinki, Naantali, Hamina, Kotka and Raume, the largest international airport is Helsinki.