Ethiopia is still ruled by the political group that formed the first transitional government in 1991 after the military dictatorship under Mengistu Haile Mariam was overthrown.

According to ehealthfacts, Ethiopia is a country located in Eastern Africa. Political power rests with the prime minister, who, according to the constitution, heads the executive and commands the armed forces. The dominant political force is the Ethiopian People’s Democratic and Revolutionary Front (EPRDF) coalition with its regional partner parties. The leading role in the EPRDF is apparently still the Tigrayan People’s Liberation Front (TPLF), which led the war of liberation against the Derg regime and from whose ranks long-time Prime Minister Meles Zenawi, who died in 2012, came. However, the influence of other – also ethnically based – coalition parties, especially the Oromo People’s Democratic Organization (OPDO), has been increasing steadily since 2018.

After Meles Zenawi’s death, then Vice-President Hailemariam Desalegn was sworn in as his successor on September 21, 2012. There were concerns in the region and among international allies that the death of the previous prime minister could lead to instability within the government and, consequently, to unrest and economic recession. Ethiopia therefore endeavored to achieve a particularly smooth and smooth transition.

On February 15, 2018, Hailemariam Desalegn surprisingly announced his resignation. After the unrest, some of which was bloodily suppressed, he wanted to contribute to a solution and long-term pacification of the country. The reforms recently introduced, such as the exchange of the government cabinet and the release of thousands of political prisoners, did little to appease the heated domestic political mood – which explicitly also meant dissatisfaction with the prime minister.

Hailemariam’s successor is Dr. Abiy Ahmed Ali. For the first time, Ethiopia has a prime minister in him from the largest ethnic group, the Oromo. This was considered surprising and at the same time highly significant. But it strengthened the hopes for a domestic political reconciliation of the ethnic groups, which would have been so urgently needed at least since the never-ending unrest, especially in the Oromia region.

However, a failed coup attempt in June 2019, increasing divisions in the governing coalition, and violent ethnic conflicts that broke out again and again in various parts of the country are making this hope fade. 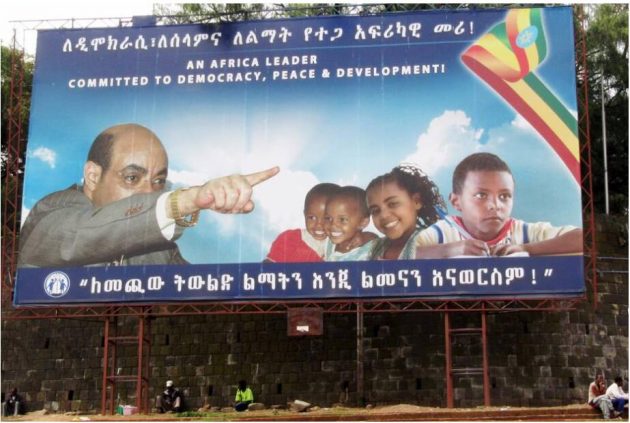 Even after his death, omnipresent – Prime Minister

The parliamentary election in May 2015 was the first since the death of longtime Prime Minister Meles Zenawi. Experts had already predicted a renewed victory for the ruling party in advance, but saw the course and outcome of the election as decisive criteria for evaluating the government’s work, especially in the areas of democratic development and the human rights situation. In the run-up to the election, the EU criticized the massive attempts at intimidation against opposition parties and the arrest of independent journalists. The first results were available shortly after the election: the governing coalition EPRDF emerged as the clear winner. The official final result announced at the end of June confirmed this: 100 percentof the votes went to the EPRDF, which provided all of the 547 MPs.

The parliamentary elections in 2005 and 2010 were already marked by some considerable irregularities.

Before the general election in 2005, international observers had high expectations. A new boost to democracy and a departure into a new pluralism had been expected. Not least because for the first time the opposition seemed to be able to seriously challenge the government in terms of organization, program, finance and personnel. The opposition parties then won a surprising number of votes. They formed two electoral coalitions: the United Ethiopian Democratic Forces (UEDF), formed in 2003 by 14 parties in Washington, and the newly formed Coalition for Unity and Democracy(CUD), which is composed of four parties. According to the official final result, they won 30 percent of the 547 seats in the House of Peoples’ Representatives.

The alleged manipulation of the election results in favor of the government coalition, however, let thousands of people take to the streets in June and November of that year. According to official figures, more than 80 people died when the demonstrations were suppressed by security forces. Thousands more were arrested, and a good 120 opposition and media members were tried, among other things, for high treason.

After the events of 2005, the situation before the 2010 elections was relatively tense. Many people feared that events might repeat themselves. These fears did not come true. Still, the mood of the people and the relationship between the government and election observers were overshadowed by the events of the time. The election observers of the European Commission were only invited after considerable disputes based on their assessment of the 2005 elections. 60 African Union observers were also present, others had not been admitted by the government.

The clear winner of the elections was the ruling EPRDF coalition. She won 545 of 547 seats in the House of Peoples’ Representatives and also dominates the Regional State Council.

The opposition parties reported campaigns of intimidation against candidates and supporters, the arrests of political opponents by the government and deliberately withholding ballot papers from opposition supporters. The assessments of the EU election observers differed – in some cases very contradictory – from: On the one hand, the election campaigns and election day itself were described as generally peaceful, the media coverage as neutral. The high voter turnout and respect for voting secrecy were also praised. On the other hand, the blurred separation between the local administration and the ruling party and the underrepresentation of women in political parties were criticized. The use of state resources for the ruling party’s election campaign was also criticized. Overall, the election did not meet many international obligations.