There are also events such as the suppression of the protests in 2005 or the recurring allegations of election manipulation against the government that have strengthened so-called liberation fronts in some regions of the country. The best-known separatist groups are the Oromo Liberation Front (OLF) and the Ogaden National Liberation Front (ONLF). The main goal of both organizations is independence from the state of Ethiopia, which they call the colonizer of their peoples and the oppressor of their cultural identities. Both groups are accused of bombing and assaulting Ethiopian soldiers or business locations of foreign investors in their respective regions.

At the beginning of 2012, a group of rebels in the Danakil desert in the border area between Eritrea and Ethiopia attracted attention when they attacked a European tour group. Several tourists, including two Germans, were killed in the incident, others were kidnapped and only released weeks later. According to the Ethiopian government, the perpetrators were mercenaries operating from Eritrea and financed and trained by the Eritrean government. The area around the Danakil desert has been considered an area with increased danger for some time.

Since the end of 2015 there have been repeated protests against the so-called “master plan” for Addis Ababa, which provided for an expansion of the capital into the surrounding state of Oromia. According to the government, this plan would have improved the infrastructure of the surrounding area of Addis Ababa and led to economic development. However, critics saw the sovereignty of the Oromo communities in danger and feared that locals would be driven from their land. In January 2016 the Ethiopian government announced the withdrawal of the “master plan” after persistent (sometimes violent) protests. In the course of the month-long protests, security forces are said to have up to 400 peoplekilled and imprisoned tens of thousands. Violent acts by demonstrators were also reported.

The anti-government protests had steadily expanded in 2016. Members of the Oromo and Amhara ethnic groups protested against the corruption and political dominance of the ruling EPRDF, called for a better distribution of the fruits of economic growth and more political participation. The government continued to take rigid action against the protests. The situation, sometimes described by the media as resembling a civil war, was observed with great concern by human rights organizations and also had an impact on businesses. From October 2016 to August 2017, the government was in a state of emergencyhas been imposed. This meant, among other things, a ban on the use of radio and television stations by the exile opposition. Linking websites or other content of the exile opposition on social media was also a criminal offense. In large parts of the country, the mobile Internet was switched off again and again for weeks, and the sending of SMS was also restricted. Thousands, including leaders of the opposition, are said to have been arrested as part of the state of emergency. Further protests critical of the government and interethnic disputes did not allow the country to calm down at the end of 2017 either.

With the surprising resignation of PM Hailemariam Desalegn in February 2018, domestic political instability had reached a new high point from the point of view of many observers. Observers initially assumed that the mass protests of recent years and the resignation are signs of reforms within the EPRDF coalition, which has ruled since 1991, but are not harbingers of fundamental democratic reforms. As a sign of tension within the government (some speak of fear of further destabilization and loss of power) was re- imposition of a six-month state of emergency interpreted shortly after Hailemariam’s resignation. The Ethiopian government justified this step with the ongoing unrest, but considers the security situation overall to be stable. The imposition of the state of emergency was internationally met with widespread criticism and concern. 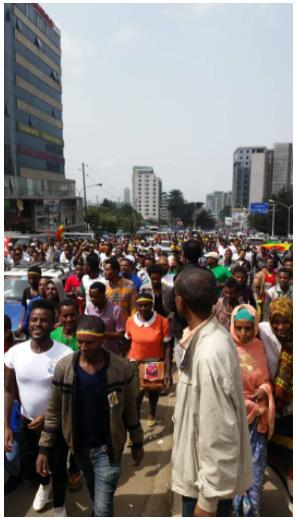 With the election of Dr. Abiy Ahmed Ali as chairman of the government coalition and his swearing-in as prime minister, hopes for a national reconciliation between the ethnic groups initially grew. Dr. Abiy even ethnic Oromo, issued as part of its dialogue and reconciliation strategy of OLF-related opposition group amnesty, after which the members of the Eritrean exile in Addis Ababa returned. In the course of this, there were sometimes violent riotsbetween mostly young supporters and opponents of these opposition activists. In the summer of 2019, the balance of ethnic reconciliation in other parts of the country is sobering: On the border between the regions Somali and Oromia there are repeated excesses of violence, also on the border between the Oromi region and the Southern Nations ‘, Nationalities’ and Peoples ‘Region (SNNPR) there is armed conflict. Overall, the number of internally displaced people in Ethiopia rose to around 3 million people.

The reallocation of ministerial departments, the partial replacement of his cabinet and his willingness to enter into dialogue with members of the opposition can be interpreted as a sign of real political change. He and the entire government are facing massive challenges.

The first important steps towards domestic political relaxation, such as the lifting of the state of emergency by parliament at the beginning of June 2018, only had a short-term effect. A year later, increasing tensions, both within the government and between the various ethnic groups, testify to the turmoil in the country.

In the first few months after taking office, the prime minister enjoyed a great reputation among the population, and his first reforms were welcomed both within Ethiopia and abroad. Not to be underestimated, however, are the forces that continue to work against national unification and the government: At a government rally in June 2018, dozens of people were injured, some of them life-threateningly, in a grenade explosion; in June 2019, according to government information, a coup attempt was prevented.

Travelers are urged to observe the current travel advice from the Federal Foreign Office.

The increasing number of Sudanese (both southern and northern Sudanese), Eritrean and Somali refugees in the country is also a stress test for the tolerance and ability of the Ethiopian population to integrate.

According to dentistrymyth, Ethiopia is a country located in Eastern Africa. Ethiopia is one of the African countries with the highest number of refugees, which poses great logistical challenges for the Ethiopian government and international aid organizations on site.