Administrative reforms since 1991 and current situation

When the EPRDF took over government in the early 1990’s, no administrative reform was planned. First of all, the new government coalition was concerned with a functioning state apparatus. In the first few years, advised by the World Bank and the International Monetary Fund, priority was given to structural adjustment with economic liberalization and structural reforms in the public sector. One of the consequences of these reforms was that around ten percent of the workforce in the public sector was cut. In addition, there was the dismissal of military cadres from the civil service, which contributed to the shrinking of the administration. All of this, of course, did not lead to an improvement in the performance of the public sector.

Only in a second reform phase after 1996 did the government recognize the need for a comprehensive reform of the public service. This led to the development of the Civil Service Reform Program, which includes the adaptation of the legal framework, the standardization of structures and processes as well as the qualification of personnel. The first notable progress was made during this period in shaping the legal framework for the public service and finance.

After some tension within the ruling EPRDF coalition, a group around Prime Minister Meles Zenawi was able to prevail with the aim of abolishing state socialism and implementing liberal reforms. Ministries and other organizations have been created at the federal level and the federal system has been strengthened by giving the regional governments more personal responsibility. However, this differentiation did not make the implementation of reforms easier: it led to higher expectations of the people of the regional and local administrative units.

A third phase of reforms began in autumn 2001. There were other changes in the civil service, with Civil Service Reform Offices being set up at the federal and regional levels. However, the support offered by international donors to these offices was poorly coordinated and therefore hampered the effectiveness of the entire program. In 2004 the Public Sector Capacity Building Program Support Project (PSCAP) was created to support reforms at the federal and regional levels.

The public sector reform programs in Ethiopia have achieved success, particularly with regard to community services. However, many challenges remain. Above all, there is a lack of accountability and transparency on the part of the institutions, inadequate material and moral incentives for employees (and the widespread corruption resulting from this). These problems make it difficult to steer the reform process and hinder the participation of various stakeholders. 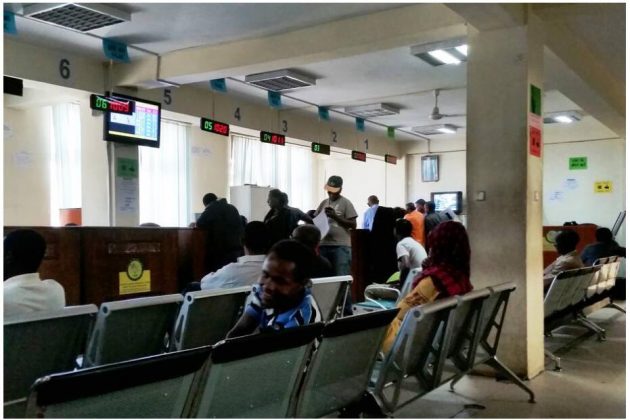 Waiting area in an authority

The reform has now made good progress, and mistakes and weaknesses in earlier political systems have been overcome or at least reduced. Capacity building to implement government programs is promising, and the service orientation, transparency and accountability of the Civil Service have improved. Gender mainstreaming and ethnic equality have arrived as issues in the reform process, the legal framework of the public service is largely consistent. Measures for the qualification of personnel within the framework of capacity building programs at federal and state level are slowly unfolding their effects.

Nevertheless, the challenges for the next few years remain diverse: The much-lamented low efficiency of the administration is mainly due to the behavior and attitude of the staff. A survey of executives showed that the technical qualification of the employees is sufficient, but they lack the soft skills that are necessary to deal constructively with uncertainties and conflicting interests and to be able to shape change processes.

A program implemented with the help of InWEnt (one of the predecessor organizations of GIZ) for the development of executives in the public service has shown that those involved want changes in behavior themselves in order to meet the requirements of a service-oriented administration, flexible and still legal and rule-oriented with citizens and Business to be able to interact.

According to ezinereligion, Ethiopia is a country located in Eastern Africa. The Ethiopian legal system contains elements of several Western legal systems and is difficult to systematize.

According to the constitution, the judiciary is independent. The judicial system is perceived as corrupt and opaque. Judges are considered to be poorly trained and not always adequately informed about the applicable laws. This is reflected accordingly in the procedures. A judicial reform is operated for well over 15 years. Experts assume that it will be strongly influenced by the democratization processes that have been initiated since 2018.

There have always been spectacular cases of corruption in Ethiopia involving high-ranking government officials. There have been convictions in the cases that have come to light. In addition, corruption is perceived as a problem in everyday life. In the Corruption Perceptions Index of Transparency International, however, that measures how corrupt the public sector is perceived in a country, Ethiopia could considerably improve its position in recent years and is now the first time in international midfield.

A growing problem is the billions that are leaving the country as illegal financial flows. There are also reports on corruption in development cooperation and disaster relief.

The Federal Ethics and Anti-Corruption Commission was established in 2001. It is responsible for both the prosecution of reported cases of corruption and for educating the public about corruption. Although some presentable results have already been achieved, the independence of the Commission is in part questioned.