The island of Cyprus is located in the eastern Mediterranean and is about 50 km from the Turkish mainland in the north and 100 km from Syria in the east. With an area of ​​9,251 km2, Cyprus is the third largest Mediterranean island (after Sicily and Sardinia). See Cyprus country abbreviation.

The island is characterized by two mountain ranges, between which there is a wide plain (Messaria). In the north, the Kyrenia Mountains (also called Pentadaktylos) run from west to east almost parallel to the coast. The highest point here is the Kyparisso with 1,024 m. The mountains drop steeply into the sea towards the north coast of Cyprus.

In the southwest of the island is the Troodos Mountains, which are of volcanic origin. The Olympos in the Troodos Mountains is the highest mountain in Cyprus at 1 951 m. To the west and south, the mountain range merges with the hilly country, followed by a coastal plain. In the center of the island between the Kyrenia and Troodos mountains lies the Messaria plain, the main area of ​​cultivation and settlement. Most of the rivers on the island dry up in the summer months. The longest river is the Pedias. In addition to some natural freshwater lakes, there are artificial reservoirs that serve as drinking water reservoirs.

The capital of both countries is Nicosia,which is located in the interior of the island and through its old town the border between the Turkish north and the Greek south.

Cyprus has a Mediterranean climate with long hot summers and mild winters. The average January temperatures in Nicosia are 10 °C and in July 28 °C. Most rainfall falls in the winter months of December and January. In Nicosia up to 400 mm are measured annually, in the Troodos Mountains up to 1,000 mm.

Among other things, Cyprus moufflons, red foxes, martens, rabbits and squirrels live on mammals in Cyprus. In addition to numerous reptiles, the bird world is particularly rich in species: birds of prey such as eagles, falcons, sparrowhawks and vultures occur as well as chickens and songbirds. Numerous migratory bird species rest on the island.

Cyprus has a total population of around 1,038,000. About 78% of them are Greek-speaking Cypriots, about 12% of Turkish descent. The Greeks are mostly members of the Cypriot Orthodox Church and live in the southern part of the island. The Turks live in the north, which was occupied by Turkish troops in 1974, and are followers of Sunni Islam. Around 80,000 Turks have been settled in Northern Cyprus since the occupation. Greek and Turkish are official languages ​​in southern Cyprus, and only Turkish in northern Cyprus.

According to COUNTRYAAH, 57% of people live in cities, the largest city is the capital Nicosia with about 305,000 residents (metropolitan area). The border between the Turkish north and the Greek south runs right through the old town of Nicosia. Other cities include Limasol with approximately 173,000 residents, Larnaca (77,000) and N¨¦a P¨¢fos (Paphos, 51,000). The average settlement density of Cyprus is 82 residents per square kilometer, the Messaria plain and the coastal plains in the south and west are most densely populated.

Each part of the country has its own social and health care system, education is good in the basic area, literacy is around 99%. The average life expectancy is 77 years. 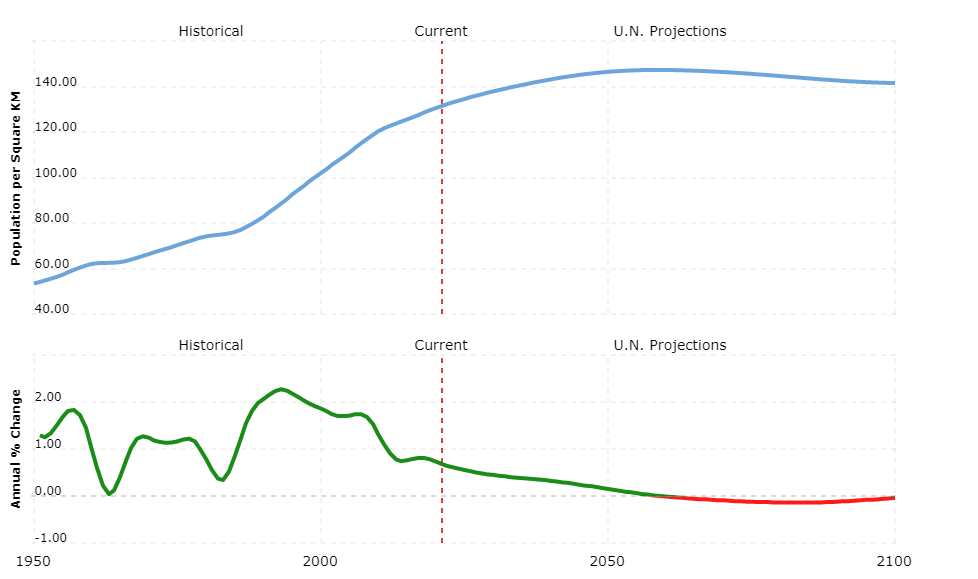 The northern part of Cyprus has been occupied by Turkish troops since 1983, the “Turkish Republic of Northern Cyprus” was proclaimed here in 1983, but is only recognized as an independent state by Turkey. The Greek-Cypriot “Republic of Cyprus” in the south of the island is the official representative of the island of Cyprus under international law. Between the two parts of the country is an uninhabited buffer zone guarded by UN troops.

The Republic of Cyprus is a presidential democracy according to the 1960 constitution. The head of state is the president, who is also head of the government (since February 2013 Nikos Anastasiadis) and is elected by the people every five years. The President appoints the ministers. According to the constitution, the office of Vice President must be filled by a Cypriot of Turkish origin, it has been vacant since 1974. The legislature lies with the parliament (Vouli ton Antipros¨®pon), the term of office of the total of 80 deputies is five years. The 24 seats intended for Turkish Cypriots are also vacant.Important parties are the Conservative Democratic Collection (DISY), the Communist Building Party of the Working People (AKEL) and the Democratic Party (DIKO).

A separate government and parliament (50 seats) are elected in the Turkish Republic of Northern Cyprus. The term of office of the president elected by the people (since April 2010 Derviş Eroğlu) is five years.

Cyprus is divided into six districts, one of which is in the Turkish north.

After the division of the island in 1974, a large part of the agriculturally important regions in the Messaria plain came under Turkish rule, as did the most important industrial plants and the important seaport of Famagusta. However, the economy of the Republic of Cyprus quickly stabilized. However, the financial crisis did not leave the Republic of Cyprus unscathed. The government asked the EU for aid loans in 2012. In spring 2013 there was a banking crisis.

Around 17% of the total area of ​​the country is used for agriculture, and this must be largely irrigated. A large part of it lies in the Messaria plain, which mainly belongs to the Turkish part of the country. The main crops are potatoes, citrus, barley, grapes, olives and various types of vegetables.

In the Republic of Cyprus, around 2% of all workers are employed in agriculture. Livestock farming is important (poultry, pigs, sheep, goats, dairy cows).

Mineral resources include copper (which was mined in prehistoric times), chromium, pyrite, asbestos and clay. Most of the deposits are now exhausted, so that mining is of little importance. The industry focuses on the processing of food and beverages, the manufacture of textiles, the chemical and metal industries and the manufacture of wood products.

Currency in the Republic of Cyprus is the Euro (= 100 cents), in the Turkish Republic of Northern Cyprus the New Turkish Lira (= 100 New Kurus).