The Republic of Cuba (Rep¨²blica de Cuba) lies at the entrance to the Gulf of Mexico east of Central America in the Caribbean Sea. The national territory covers a total area of ​​110 861 km² and consists of the main island of Cuba, the largest of the Antilles, and around 1,600 other small islands and coral reefs, almost all of which are uninhabited. Cuba is separated from the North American mainland by the approximately 170 km wide Florida Street. See Cuba country abbreviation.

The main island of Cuba extends for a length of around 1,200 km and is up to 200 km wide. Hills and plains occupy around two thirds of the country’s area. Mountain ranges can be found in the far east, in the west (Sierra Guaniguanico up to almost 700 m) and in the southeast. Here is the folded mountains of the Sierra Maestra with the highest elevation in the country, the Pik Turquino with 1 994 m. Other mountain ranges are the Sierra del Crist¨¢l in the northeast of the Sierra Maestra and the Baracoa Mountains. In central Cuba, the Karst Mountains Sierra del Escambray with heights up to 1 150 m.

The coastline is around 6,000 km long and very rugged with numerous bays. All islands and reefs off the main island are made of coral lime. Havana ( La Habana), the capital of Cuba, is located on the northwest coast of the island.

Cuba is in the marginal tropical area and has an alternatingly humid climate with little seasonal temperature fluctuations. In the capital Havana, 22 °C is measured in January and 28 °C in July. The dry season lasts from November to May, most of the precipitation falls in the months of June to October. The national average is between 1,000 mm and 1,500 mm. Between June and November, cyclones (hurricanes) can occur, which cause severe damage, especially in the coastal regions.

The original vegetation in Cuba included extensive rain-green wet forests, savannas and mixed forests, which were largely destroyed by deforestation for agricultural use (especially the creation of large sugar cane and coffee plantations) and for shipbuilding. Nevertheless, the vegetation in Cuba is very lush with around 8,000 plant species (including around 700 different orchids). Mangroves can be found on the coasts, inland the up to 40 m high royal palm, one of around 300 palm species found on the island. There are still occasional pine-oak forests and remnants of evergreen rainforest on the inaccessible mountain slopes of the Sierren in the south of the country. Reforestation measures are showing initial success in forest stands.

The island’s fauna is particularly rich in birds, and the number of species is estimated at around 300. In addition to many migratory birds, these include the Cuba amazon, the Cuba parakeet and the Aura Tiñosa, a special kind of vulture. Numerous edible fish and over 30 different shark species live in the fish-rich coastal waters. The most common reptiles are caimans, iguanas and snakes; Crocodiles are bred on state animal farms.

Cuba has around 11.35 million residents. The population is made up of almost 51% mulattoes, 37% whites and around 11% blacks, who descend from former slaves. The original Indian population was largely expelled or perished from diseases brought in by the colonialists. Smaller minorities form the Philippines and Chinese, who immigrated in the 19th century. Around three quarters of the population live in cities, in the capital Havana about 2.21 million people, other cities are Santiago de Cuba with over half a million residents and Camag¨¹ey with around 305,000 residents. One million Cuban exiles (estimated) live in the United States, particularly in the state of Florida.

According to COUNTRYAAH, the literacy rate of 97% is high for a third world country, which is due to the education program of the Cuban government. Life expectancy is also comparatively high (women 80 years, men 75 years) because medical care is largely free of charge. The population growth is practically zero.

Today, over half of Cubans are considered to be non-denominational, while the proportion of Christians is estimated at around 43% (religious freedom has existed since 1976). The official language in Cuba is Spanish. 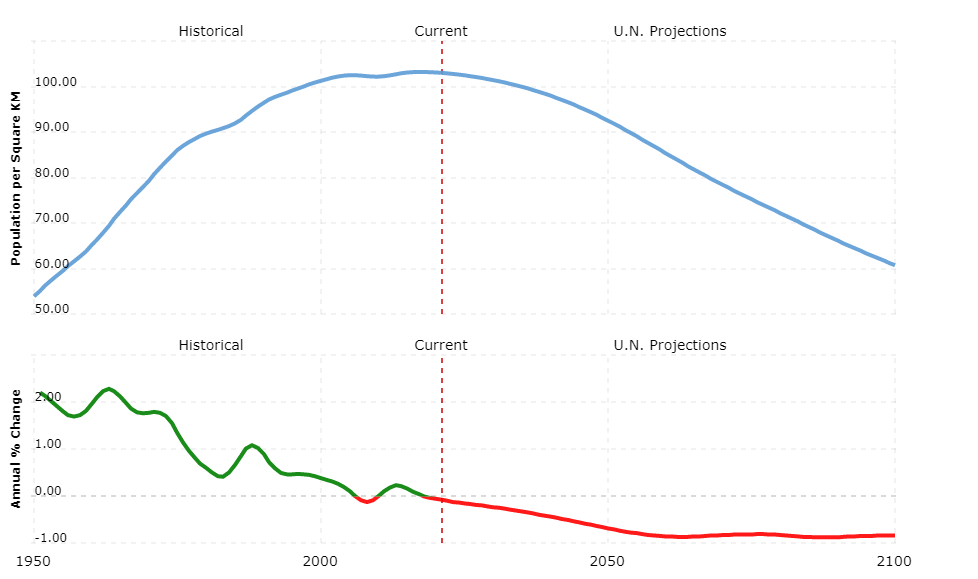 According to the 1976 constitution, Cuba is a single-party socialist state with the Communist Party as the only legal political party. In 2002 socialism was enshrined in the constitution as “irrevocable”. The head of state and commander in chief of the armed forces is the President (since July 2006 Ra¨²l Castro, the brother Fidel Castros; he was elected for the first time in January 2008).

The National Assembly of Popular Powers (Asemblea Nacional del Poder Popular) has 612 members who are directly elected by the people for five years. The deputies elect the 31 members of the State Council (supreme state body and de facto legislative body) and together with them determine the members of the Council of Ministers (top executive body, 33 members).

The legal system is made up of Spanish and US law in conjunction with communist regulations.

Cuba is divided into 15 provinces and the “special province” Isla de la Juventud.

Since the revolution in 1959, a socialist-oriented planned economy has been operating in Cuba, without the country having been able to completely detach itself from the structure of the colonial economy (monocultures). The collapse of the Eastern Bloc and the associated loss of the most important trading partner, the Soviet Union, and its massive economic support gave the Cuban economy a serious crisis in the early 1990s. To make matters worse, the trade embargo imposed by the United States against Cuba is still in force despite sustained protests by the United Nations. When Russian oil deliveries ceased in 1994, drastic reductions in energy consumption became necessary. The Cuban government already called a “special period” in 1991 with extreme austerity measures and strengthening self-sufficiency. The then head of state, Fidel Castro, also tried to reintegrate Cuba into the world market and allowed more foreign companies to invest in the country. The approval of small and medium-sized businesses on an independent basis is also one of the measures to be taken to strengthen the Cuban economy. However, a transition to a market economy and more private property is rejected.

Approx. 25% of all workers in Cuba work in agriculture. The export of sugar cane and sugar cane products decreased. Coffee, tobacco (export of the world-famous Havana), vegetables, rice and citrus fruits are also grown. Fishing plays a major role in meeting the food needs of the population.

Services are the most important economic sector in Cuba today, including the export of medical services. As the main source of income for foreign exchange, tourism has placed the sugar cane industry in second place since the mid-1990s. The government is pushing ahead with the expansion of the tourism industry. The transfers from Cubans living in exile to their relatives are also of great importance.

In industry, food processing companies and the manufacture of chemical products and textiles are of paramount importance. Three-quarters of the energy needs must be met through oil imports. Cuba has extensive mineral resources such as nickel, cobalt, manganese, chrome and copper. The main exports are to Venezuela, China and Canada; In addition to fuels, food and machinery are imported from Spain, Venezuela and China.

The outdated transport network was declared one of the main investment focuses in 2006. There are twelve international airports.

The currency is the Cuban Peso (CUP) and the Convertible Peso (CUC).