The Republic of Croatia (officially Croatian: Rupublika Hrvatska) is located in southeastern Europe on the Adriatic coast. Croatia borders Slovenia in the north, Hungary in the northeast, Serbia in the east and Bosnia-Herzegovina in the southeast.

The landscapes of Croatia are diverse. Flat plains along the Hungarian border can be found as well as low mountains and highlands on the Adriatic coast and on the islands. Four major landscapes can be distinguished: Istria, Dalmatia, Lower and High Croatia.

The southern part of the Adriatic peninsula Istria lies in the far north of the country, consists largely of karst limestone areas and has its highest mountain in the Ucka at 1,396 m. The south-west, which tapers towards the south, is occupied by Dalmatia on the Adriatic coast. The Dalmatian Islands, which extend from the island of Pag in the north to the Bay of Kotor in the far south of the country, are located in front of an approximately 1,800 km long Adriatic coast. In the Dinaric Mountains north of Split, the Dinara is the country’s highest mountain at 1,831 m. In addition to Istria and Dalmatia, the landscapes of Lower Croatia and High Croatia can be distinguished. Lower Croatia consists of the fertile plains of Posavina and Podravina and an island mountain range that lies between the rivers Drau, Danube and Sava. This region, which is called Slavonia, changes into a basin landscape at an altitude of around 700 m, which is surrounded by mountain ranges (Velebit 1,752 m). The Plitvice Lakes are located in this region, which is also called High Croatia.

Mediterranean and continental climate influences come together in Croatia. The coastal regions on the Adriatic have mild winters and hot summers, whereas the inland landscapes have cold, continental-influenced winters. The average temperatures in the capital Zagreb are 0 °C in the inland in January and 22 °C in July. Annual rainfall is quite high at 3,000 mm in the country’s capital. But they are surpassed on the western flanks of the coastal mountains. A special feature due to the increased tectonics of the region are regularly occurring earthquakes.

In the coastal area, the natural vegetation consists of maquis, a Mediterranean form of vegetation that can also be found in the Dinaric Mountains. It is formed from shrubs and up to five meters high trees (including agaves, pines, olive trees, cedars and cypresses) and hardwood trees such as real laurel. In addition, thorn bushes and perennials and – more rarely – lianas can be found. The macchia was mostly created in places in cultural landscapes, where once cleared forest areas were left to nature. The vegetation in the interior is more varied, for example oak forests can be found in Lower Croatia. Mixed forest as well as beech and oak forest can be found in the mountain regions, and coniferous forest at higher altitudes.

In addition to the fauna typical of Central Europe, Croatia has brown bears as a special feature in the regions in the mountains that are not particularly affected by tourism. Wolves and chamois also have their territory here. Peregrine falcons can be found on some of the islands. They hunt flying birds up to the size of ducks. In northern Dalmatia there are also isolated areas of griffon vultures and golden eagles.

Croatia has a total population of around 4.49 million. The country’s largest city is the capital, Zagreb, which is home to around 780,000 people. According to COUNTRYAAH, 90% of the population are Croatians and due to the systematic displacement at the end of the 1990s only 4.5% Serbs, both South Slavic peoples. The smaller minorities are Italians, Hungarians, Slovaks, Slovenes, Germans, Bosnians, Czechs, Albanians, Ruthenians (Ukrainians) and Macedonians.

The national language according to the new constitution is Croatian. The Serbian-Croatian language is spoken in addition to Croatia in Serbia, Montenegro and Bosnia and Herzegovina. Modified forms can be found in Southeast Austria, Slovakia and Hungary as well as the Romanian Banat and the Italian Molise region. While the Serbs use the Cyrillic script, the Croats use an expanded Latin script.

The illiteracy rate is 1.5%, the population growth is practically zero due to the low birth rates. The average life expectancy is 78.3 years. 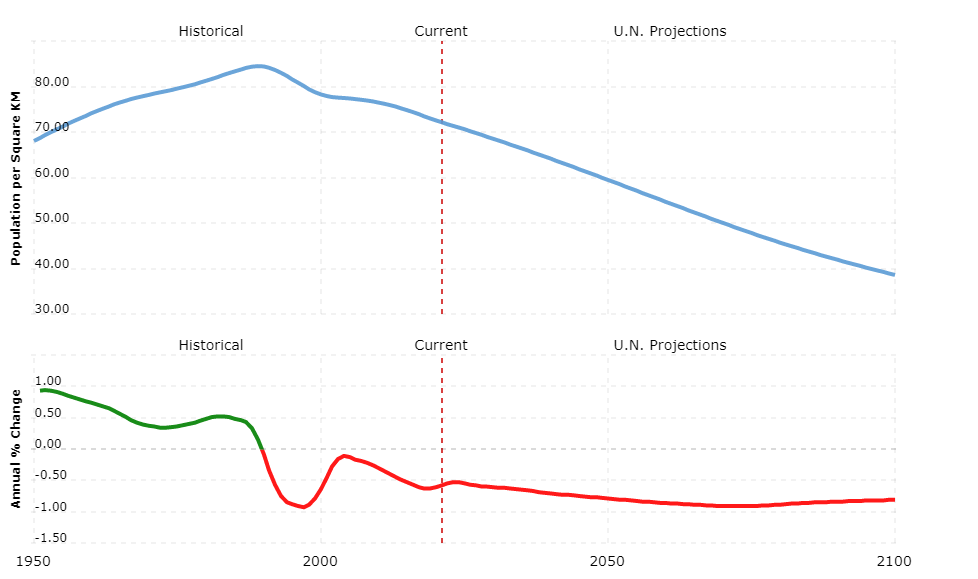 The Republic of Croatia is a parliamentary democracy (1990 constitution). The strong president (Ivo Josipović, since February 2010) is elected every five years. With the approval of Parliament, he appoints the Prime Minister (Zoran Milanović, since December 2012). The House of Representatives (Sabor) currently consists of 151 members. These are selected for four years; eight seats are intended for national minorities, three for Croatians abroad. The exercise of judicial power is formally independent.

The Republic of Croatia as the central state is divided into 20 counties (“Zupanija”) and the administrative unit Zagreb.

Croatia experienced a significant recession after 1991, in the first years of its independence. From the turn of the millennium, the upswing was based on successful tourism, banking and public investment. The privatization and reorientation towards the Western European market is associated with high unemployment (2012: 19%). High non-wage labor costs, complicated import and export regulations, high interest rates and excessive land prices are further obstacles. There is a large regional disparity in economic strength. Croatia joined the EU in 2013.

Around 40% of the country’s total area is used for agriculture. Livestock farming and especially sheep farming are predominant in high Croatia, coastal fishing. Corn, wheat, potatoes, sugar beets, vegetables and, along the coast, wine as well as citrus fruits, olive trees and tobacco are grown. The agricultural sector generates around 5% of the gross domestic product, the service sector accounts for 68%, the industry for 27%.

Mineral resources are only available in small quantities. Above all, bauxite, lignite and hard coal, as well as oil and gas in Slavonia are particularly noteworthy.

About ten million tourists annually visit the coastal regions of Istria and Dalmatia and bring the important foreign currency to Croatia.

The most important export goods are oil, machinery, metals, clothing, pharmaceutical products and food, which are delivered to Italy, Bosnia-Herzegovina and Germany. Imports – especially oil, machinery, electronics, chemical products and food – come from Italy, Germany and Russia. In 2001 Croatia, Albania, Bosnia-Herzegovina, Bulgaria, Yugoslavia, Macedonia and Romania agreed on a free trade area with effect from 2003.