Cameroon’s foreign policy is still characterized by its proximity to France, and thus indirectly to the EU. On the other hand, when Cameroon joined the Commonwealth in 1995, it also signaled that it would not only commit to France and Francophonie. An intention that is also evident in the recent intensification of contacts with the USA, China and Japan.

Cameroon has a “live and let live” policy within the region. Peaceful coexistence with neighboring countries is the guideline of Cameroonian foreign policy, conflicts are “cooked on a low flame”. A motto that also proved its worth during the Bakassi War between Nigeria and Cameroon. The conflict with Nigeria around the fish and oil-rich Bakassi peninsula in the Gulf of Bonny, whose origins lie in colonial times, was decided in 2002 by the International Court of Justice in The Hague in favor of Cameroon. In August 2008 the peninsula was handed over to Cameroon, thus fulfilling an essential point of the Green Tree Agreement. Despite this ultimately pleasantly peaceful settlement, there are still many problems to be solved.

The former President of the Central African Republic, François Bozizé, also found (temporary) refuge in Cameroon after the coup at the end of March 2013.

Internationally, Cameroon has been increasingly involved in international peace missions since 2014. There are currently Cameroonian police officers and armed forces in the Central African Republic (MINUSCA), the Democratic Republic of the Congo (MONUSCO) and in Mali (MINUSMA).

In COMIFAC, the heads of government of the republics of Cameroon, Central Africa, Equatorial Guinea, Gabon, Congo, Chad and the Democratic Republic of the Congo have committed themselves to the protection and sustainable use of the rainforests of the Congo Basin.

The countries bordering Lake Chad have joined forces in the LCBC. The objective is the regulation and use of water and other natural resources, the promotion of development projects and research projects in the region. 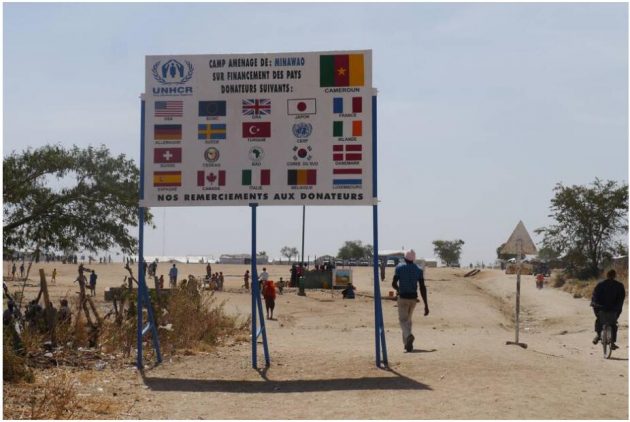 There are other refugee camps in the Extreme North region. Boko Haram is driving more people out again, and the numbers of Nigerian refugees and Cameroonian internally displaced persons are increasing. Due to increasing attacks, refugees are being relocated from the border regions to the interior.

In addition to the refugees from the Central African Republic and Nigeria, there are more than 1 million Cameroonian internally displaced persons who have left their homes in the Anglophone regions (711,000) and in the north (321,000) due to the unsafe situation.

More than 63,000 Cameroonians are in the Anglophone regions of Nigeria as a result of the war.

In February 2008 fighting between government troops and rebels broke out in the Chadian capital of N’Djamena, whereupon a stream of refugees set in motion towards Cameroon. In the meantime, some Chadians have returned to their homeland, others have settled in North Cameroon.

Corruption – a Cameroonian Specific? Since the late 1990’s, Cameroon has featured prominently in reports from Transparency International. In 1998 and 1999, Cameroon was even considered the most corrupt country in the world. In recent years, Cameroon has been ousted from this position by other countries.

Corruption and the fight against it remains an issue in Cameroon. Corruption is omnipresent: the police, the judiciary, administration, schools and universities, the private sector… The Commission Nationale Anti-Corruption (CONAC), founded in 2006 after various anti-corruption campaigns, does its work and publishes its reports at irregular intervals.

Nevertheless, it is an open secret that the fight against corruption is also followed by politics in order to put unpopular people cold. Many anti-corruption campaigners have already been caught up or overtaken by the events. The initiator of the “Operation Sperber” initiated under international pressure, ex-Prime Minister Inoni, has been in prison since 2013 for embezzlement.

And many a “golden boy” was brusquely torn out of the successful business.