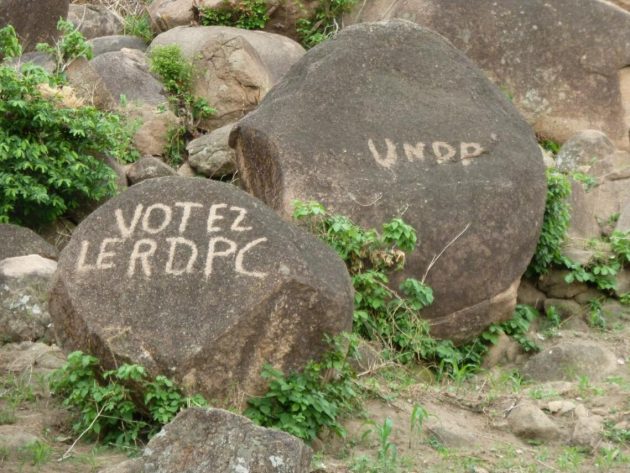 Election campaign in the Mandara Mountains

According to the electoral law, all Cameroonians who have reached the age of 20 and are entered on a voter list are entitled to vote.

Local, parliamentary and presidential elections are repeatedly accompanied by allegations of fraud. There have been no serious political disputes since the early 1990’s, however, because politicians are trying to satisfy all ethnic groups, at least poorly, through the involvement of the elites and legal and extra-legal distribution mechanisms.

After the last elections there was a major reshuffle of government, in some cases with the usual carousel of jobs among the 51 ministerial posts.

A new design of the constituencies favoring the ruling party, the majority electoral system and the “overflow” of opposition politicians have made many voters doubt the functioning of the multi-party system in Cameroon. Irregularities in the elections, which repeatedly led to election boycotts by the two main opposition parties SDF and UNDP, resulted in the establishment of an independent election commission ONEL (Observatoire National des Elections) in 2000. However, the composition of the commission – its 11 members were appointed by the President – cast doubt on its actual independence.

The last presidential election took place in October. The political climate in the country could hardly have been more tense. Biya decided not to campaign and relied entirely on “La force de l’expérience”. The turnout was generally mau (officially just under 54%), the population of the English-speaking provinces made little use of their right to vote (5 or 17%). The result, 71% for Paul Biya, wasn’t really surprising. Some opposing candidates appealed for election manipulation. The supporters of the second-placed presidential candidate Maurice Kamto, according to the official result with 14% of the vote, have been protesting at home and abroad since the official election results were announced. The “high point” so far was the arrest of Kamto together with some of his supporters at the end of January 2019. Although the arrested persons were amnestied by Biya in October 2019, it clearly shows how nervous their nerves are. In addition, French President Macron could not help showing that this release came under pressure from France, which of course gave rise to anti-French protests.

At the beginning of October 2011, Paul Biya was confirmed in office with a clear majority. With a turnout of 66%, Paul Biya received 78% of the vote. With its 22 presidential candidates, the opposition landed far behind. The outcome of this election was hardly surprising; there is resignation in the country with regard to democratic change, and sharp criticism has been expressed above all by Cameroonians living abroad.

International election observers found some points of criticism (doubts about the independence of ELECAM, irregularities in voter registration, insufficient separation between state and party during the election campaign, etc.), but on the whole the elections were acceptable.

In mid-October 2004 President Paul Biya was re-elected. The opposition was very fragmented and ultimately could not agree on a common presidential candidate. The UNDP even called for the election of Biya. There was a heated discussion about the extent of electoral obstruction by government agencies.

In October 1997, presidential elections were held in Cameroon, with Paul Biya again winning. He had previously pushed through a seven-year term for the president in parliament.

Parliamentary and local elections are held at the same time.

The elections would actually have been held in 2018, but were postponed twice due to the unrest in the Anglophone regions until they could take place on February 9, 2020.

The 2020 elections were not a lucky star.

According to physicscat, Cameroon is a country located in Central Africa. The Anglophone separatists had already threatened violence against all those who would vote in the run-up to the election and consequently there was intimidation, arson and kidnapping against people who positioned themselves to hold the elections before the actual election day. As a result, the Cameroonian armed forces in the SW and NW regions were significantly increased.

In the northern region of Cameroon, the elections were adversely affected by increased activity by Boko Haram, and the opposition party MRC (Movement for the Rebirth of Cameroon) led by Maurice Kamto declared an election boycott.

Election day itself was marked by serious unrest in the SW region.

The official election result shows an overwhelming victory for the ruling party, ultimately winning 153 seats out of 180, and the opposition sinks into insignificance.

After the election date had been postponed again (the opposition had repeatedly called for reforms to the electoral process), the last parliamentary and local elections so far took place on September 30, 2013; – with unsurprising results: The RDPC / CPDM held its own by far.

On July 22, 2007, the RDPC / CPDM was able to gain even more seats and then had 157 seats, while the SDF lost seats. The SDF and other opposition parties questioned the election result and the official turnout figures (62%). The elections were calm.

In 2002 parliamentary elections took place, which were won by the ruling party RDPC / CPDM by a large margin.

Only the SDF, which has a majority in the Anglophone West and in Douala, was able to win 22 seats and important municipalities in the 2002 parliamentary and local elections. However, it split after these elections and since then has repeatedly faced violent internal party conflicts, which led to losses in the subsequent elections.

On April 14, 2013 for the first time senators were elected for the second chamber, 17 years after the creation of the constitutional foundations. The big winner was the RDPC / CPDM with 56 out of 70 seats. The motives for the chosen point in time to set up the second chamber remain in the dark.