A good 20% of Cameroonians have to get by on less than $ 1.90 per day. In the case of poverty indicators such as the country-specific average school years (12.7), life expectancy (58.9) or maternal mortality (596 deaths per 100,000 births), the large regional differences must not be forgotten. The catchphrase: “Poverty is female” can be added as follows for Cameroon: “Poverty is female, rural and inhabits the north.” In the current statistical update of the human development indices and indicators for 2018 (published in 2019), Cameroon achieved 141st out of 160 in the Gender Inequality Index and 150 out of 189 in the HDI ranking. A particularly critical point is increasing inequality. The last national Human Development Report was published in 2013.

With regard to the level of self-sufficiency with food, Cameroon is far below its potential. Small-scale agriculture has long been neglected, even downright cannibalized. The report of the Institut National de la Statistique du Cameroun provides an overview of the poverty situation in private households.

The Millennium Development Goals for Cameroon were set as follows: halving hunger and poverty, primary education for all children, no gender disparity in school education, reducing child and maternal mortality, stopping the spread of HIV and malaria, access to drinking water and establishing a trade – and a financial system that is adapted to the needs of a developing country. – An ambitious target even without the global economic crisis. For example, a growth rate of 7% was calculated in order to achieve the Millennium Goal “halving poverty” by 2015 – in fact, annual rates between 2.0% (minimum) and 5.6% (maximum) were achieved in the years 2000-2015. Ultimately, it already stood out in 2014that the result of the MDGs for Cameroon would be sobering. 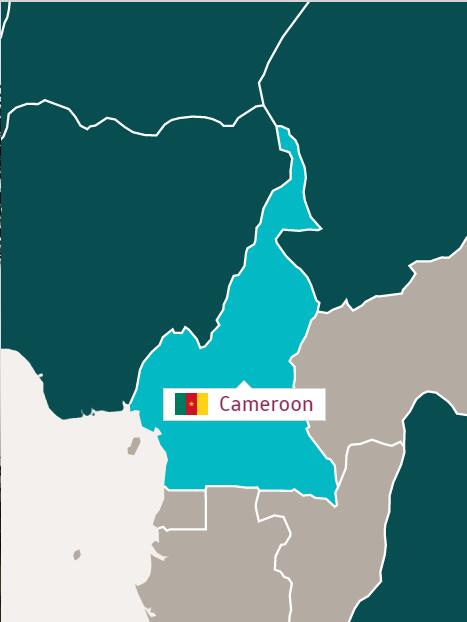 The 17 goals for sustainable development (2016-2030) were formulated as the UN successor program in 2016. The goals include the areas of poverty reduction (ending poverty, food security, health for all, access to education, access to clean water and hygiene, sustainable use of energy), politics and society (gender equality, reducing inequality, livable cities, peace and the rule of law, global partnership), Ecology (climate protection, marine protection, protection of terrestrial ecosystems), economy (sustainable growth, better infrastructure, responsible consumption and production) and have been adopted by all 193 UN member states.

For the 17 goals, 169 Sub-goals formulated and 237 indicators defined in order to track the progress of goal achievement.

The 2030 Agenda is not a legally binding agreement, but a declaration of intent, the implementation of which in the respective national politics remains open.

On the SDGs dashboard, countries and their status with regard to individual goals and indicators can be called up.

Cameroon intends to combine the SDGs with the national development goals (Vision 2035) with the help of the Stratégie Nationale de Développement de la Statistique (SNDS) for monitoring. Regarding the current status of target achievement in Cameroon, the picture nonetheless is very sobering.

However, according to the 2019 SDG Progress Report, this applies to most countries.

The Program National de Développement Participatif (PNDP) is a program of the Cameroonian government for participatory development that addresses the rural population (securing basic services, local self-determined development, decentralization) and that of the World Bank, KfW Development Bank and the Agence Française de Développement (AFD) is supported.

According to itypeauto, Cameroon is a country located in Central Africa. Official development cooperation consists of 47% bilateral aid and flows mainly into the social sector and education sector. Cameroon’s main partner is France, followed by the International Development Association (IDA) and the Federal Republic of Germany. In view of the many actors, governmental and non-governmental organizations such as https://www.237online.com/FXTECHPQ/, donor harmonization is essential.

The “Millenniums” World Bank development concept, the Comprehensive Development Framework (CDF), which takes a holistic approach by taking into account economic, fiscal and social policy and history as well as the structure of a country, was also used in Cameroon.

The World Bank is currently involved in numerous projects through the IDA (International Development Association).

USAID is involved in the areas of democracy and human rights, economic development, the environment, health, and crisis and conflict prevention.

Japan, which ranks 7th in international development cooperation with Cameroon, is involved with the Japan International Cooperation Agency (JICA) in the areas of investment promotion, infrastructure, sustainable use of natural resources and rice cultivation.

The main areas of cooperation are:

In addition, the country is supported in the area of health and the care of refugees.

Since the merger of DED, GTZ and InWEnt in 2011, the German Society for International Cooperation (GIZ) has continued its work in Cameroon. Another German organization is the CIM in collaboration with GIZ in Cameroon.

Bread for the World (formerly EED) also works in Cameroon and supports, for example, midwifery training.

In addition, the campaign of the Cameroonian NRO ACDIC (Association Citoyenne de Defense des Interets Collectifs) is supported, which among other things fights against the import of poultry scraps from Europe to Africa. Thanks to intensive public relations work that went hand in hand with the establishment of branches of the association in many Cameroonian cities, it was possible to reduce imports of frozen chickens.

Bread for the World and AGIAMONDO (formerly Working Group for Development Aid (AGEH)) work within the framework of the Civil Peace Service (ZFD) in the areaPeacekeeping and Conflict Prevention.

Current financial cooperation projects can be viewed on the KfW Development Bank in Cameroon website.

The FES (Friedrich Ebert Stiftung) aims her work in Cameroon on strengthening reform-oriented forces. As another political foundation, the KAS (Konrad Adenauer Foundation) opened an office in Cameroon in 2016 with its regional program on climate policy and energy security in sub-Saharan Africa.

The Sparkassenstiftung is involved in a project to strengthen village savings banks.

The Agence Française de Développement (AFD) runs projects in the fields of agriculture, infrastructure, resource protection, health and education, among others.

Effects of the Covid pandemic

To what extent the pandemic will affect the priorities of development cooperation so far cannot yet be foreseen.

The EU Commission has announced Corona aid for developing countries, but these funds are to be reallocated from other projects.

There was also support from China and Switzerland with medical supplies and the provision of aid money.