“Afrique en miniature – Africa in miniature”, is how the French geographer Bruneau calls it. Geographically counted as Central Africa, Cameroon rather forms the link between the two major regions of West and Central Africa, which is reflected in flora, fauna, population and culture. 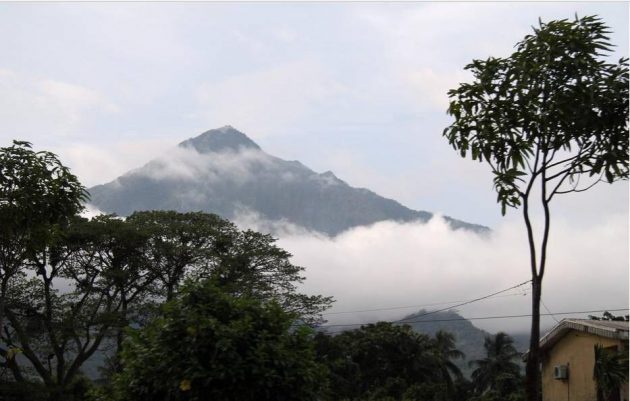 Cameroon, a third larger than Germany, stretches from the tropical rainforest to the dry savannah and has a wide variety of vegetation and climate zones. With over 250 ethnic groups, the multi-ethnic state is one of the most culturally diverse in Africa. Although agriculture and the village are still at the center of Cameroonian life, more and more people are drawn to the cities. 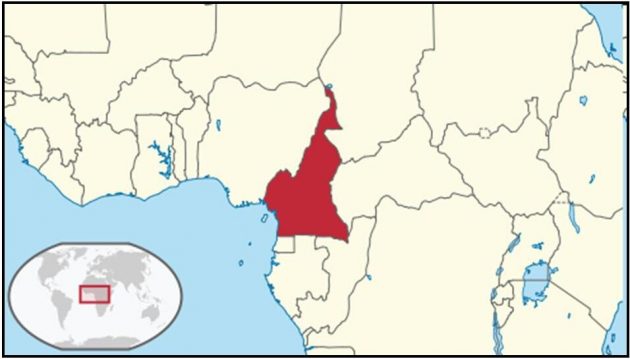 Cameroon in the region

Numerous artefacts document an early settlement of the region. First contacts with Europeans led to the establishment of trade relations and missions. Germans, British and French shaped colonial history. After independence, a one-party state was established and, since 1991, a multi-party system. Nevertheless, the president and “his” party still have the political “key power”. more

Agriculture and services are decisive for the economy. Oil, wood and agricultural products are export-determining, the main trading partner is Europe. A large part of the population has to struggle with massive poverty problems. Although the debt relief initiative freed up funds to fight poverty, the global economic crisis and rising energy prices also increased social tensions. more

The culturally very pluralistic society was characterized for many years by tolerance and mutual respect. This had a stabilizing effect, at least Cameroon is considered to be the most solid link in a region that is considered unstable. Foci of conflict in the Anglophone regions and in the north, the impoverishment of broad sections of the population, the increasing contrast between rich and poor, the “brain drain”, and the development along the borders with Nigeria and the CAR, have a destabilizing effect. more

Here you will find useful tips and practical information about everyday life in Cameroon, traveling and living, health and safety, changing money and shopping… 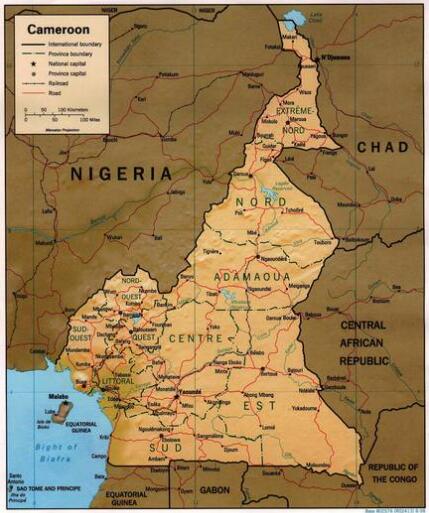 Important indicators of prosperity can be found in the annual Human Development Reports. Cameroon’s slow but steady upward trendover the years has given interesting information here, also in comparison to other countries in sub-Saharan Africa.

In general, it can be assumed that statistical data for Cameroon are more relative and not absolute. Unless otherwise stated, the data used in the following country information come from the information provided by the INS (Institut National de la Statistique du Cameroun). 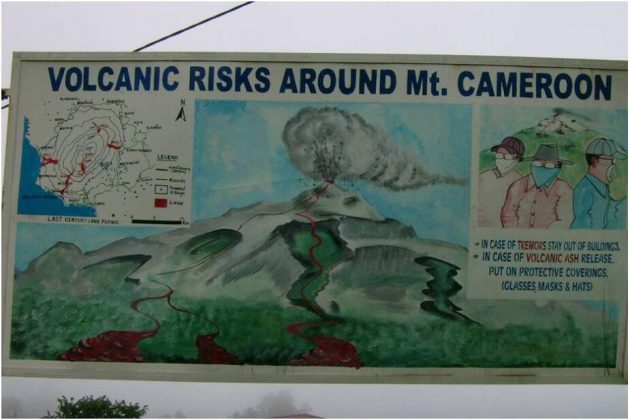 Information board on volcanic risks

The relief of Cameroon is divided into a spatially more or less pronounced flat coastal region, which rises in individual layers to the South Cameroon plateau. Then to the north, the level rises again to the Adamaoua plateau. Further north this central highland slopes down to the Lake Chad plain. In the west of the country there is a volcanic mountainous area, part of the so-called Cameroon Line, a volcanic mountain range, the foothills of which extend into the northern Mandara Mountains. The highest and most imposing peak of this mountain range is the 4095 m high Cameroon Mountain (Mont Cameroun, Mount Cameroon, Mount Fako, Mongo ma Ndemi), whose volcanic massif rises straight out of the sea and which hit the headlines with eruptions in 1999 and 2000. 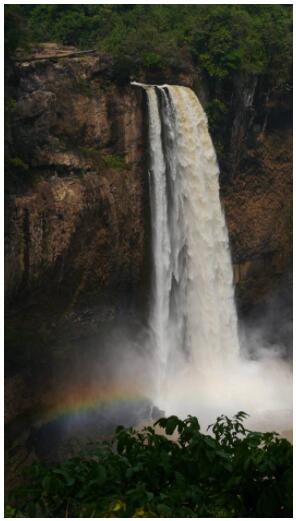 The most important water reservoirs of Cameroon are the western mountain region and the Adamaouaplateau. Important rivers in Cameroon such as the Sanaga, Wouri and Benoué have their source here. Sanaga and Wouri flow into the Atlantic, the Benoué offers a connection to Niger, navigable to Garoua in the rainy season. While the water-rich south is crossed by many rivers, the temporarily water-bearing “Mayos” (Fulfulde: river) are typical for the north of the country. The big rivers Sanaga and Benoué, as well as their tributaries, are for electricity generation of great importance in the country, but it is precisely the countless medium and small watercourses that are of inestimable importance for fishing, small transports or sand extraction. 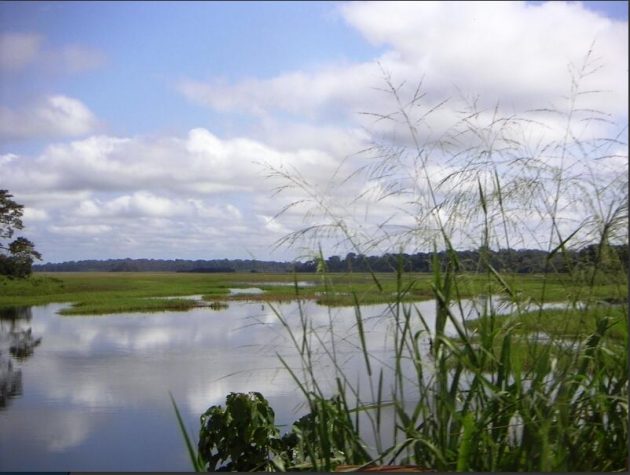 Nyong River in the Rainforest Zone

In natural lakes are crater lakes of the western highlands and the Lake Chad to name. The two volcanic lakes Monoun and Nyos became famous and notorious as so-called “killer lakes” due to sudden carbon dioxide emissions in 1984 and 1986, which led to numerous victims among the population. A degassing project is now underway at the two lakes, supervised by physicist Michel Halbwachs from the University of Savoy.

The future of Lake Chad, to which Cameroon currently still has water access, is once again the focus of attention due to the increasing discussion on climate change and the humanitarian crisis.

Cameroon has many large reservoirs, the task of which is on the one hand to regulate the water levels of Sanaga and Benoué for electricity generation, on the other hand they serve as water reservoirs for irrigation projects and the drinking water supply, especially in the north. 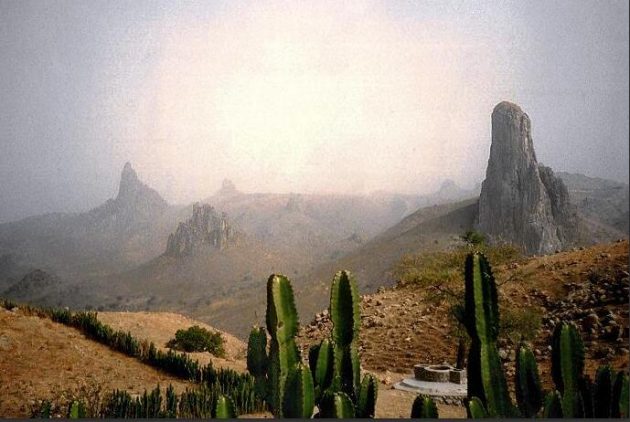 According to themeparktour, Cameroon is a country located in Central Africa. The diversity of the eco and vegetation zones is reflected in the rich flora and fauna of Cameroon. A variety that also always has pharmacological surprises in store. Many protected areas, biosphere reserves and national parks contribute to the preservation of this fascinating biodiversity in Cameroon. The Dja Biosphere Reserve, which was included in the UNESCO World Heritage List in 1987, the Korup and the Waza National Park are just a few examples. The mangrove fringes on the coast are characterized by highly specialized plant and animal communities.

Lowland and mountain rainforests are home to numerous animal and plant species that are threatened with extinction, such as various primates or tree species. Depending on the humidity regime, there are different savannah forms: from the moist tree savannah to tall grass and short grass savannah to the barren thorn grass savannah, which only allows trees to grow sporadically. Elephants, giraffes, lions and various antelope species find refuge in the national parks of the savannah areas.