The Republic of Bulgaria (officially: Republika Balgarija) is located on the eastern half of the Balkan Peninsula in Southeast Europe. With a land area of ​​110,994 km², the country is about the size of Bavaria and Baden-W¨¹rttemberg combined. Immediate neighbors are Romania in the north,Serbia and Macedonia in the west, Greece and Turkey in the south, and Bulgaria borders the Black Sea in the east. See Bulgaria country abbreviation.

The country is mostly mountainous and only has lowlands in the north and southeast. There are four major landscapes:

Firstly, the Thracian mountain range in the south, which is made up of the Vitosha, Pirin and Rila mountains and the Rhodopes and is up to 3,000 m high. With the Musala (2 925 m), which is located about 60 km southeast of the capital Sofia in the Rhodope Mountains, the mountain range has the highest mountain in Bulgaria.

The Central Bulgarian Basin (also known as the Thracian Lowlands), in which the cities of Sofia and Plovdiv are located, is also worth mentioning.

The third and fourth major landscape are the Balkan Mountains and the North Bulgarian Platte. The Balkans have mountains up to a height of 2,100 m and, from west to east, are divided into the western, central and eastern Balkans, which in Kamp Emine extend to the coast of the Black Sea. The north Bulgarian plate extends from the mountain ranges of the Balkans in the center of the country as the north Bulgarian Danube hill country to the Danube on the northern border with Romania.

With the exception of the Danube, Bulgaria has relatively short rivers. The main ones are Maritza, Iskur, Struma and Arda. Half of the rivers flow into the Black Sea, the other half into the Mediterranean. Numerous lakes are located on the coast and in the southern mountain ranges. A specialty are the approximately 500 mineral springs that arise in the country.

Dry and hot summers alternate with cold, sometimes cool, rainy winters. Although the Balkan Peninsula borders the sea, the country is largely influenced by the continental climate. The annual rainfall is correspondingly low, which does not reach more than approx. 650 mm per year even in the more fertile growing areas, which makes additional irrigation of the cultivated areas necessary. In Sofia in the west the rainfall is 640 mm, in Varna on the Black Sea 475 mm. Temperatures in Sofia average -2 °C in January, 21 °C in July, and in Varna it is milder in winter due to the influence of the sea. An average of 2.5 °C in January and 24.4 °C in July.

The naturally growing flora of Bulgaria can be divided into Mediterranean species that grow near the sea and vegetation that grows at higher altitudes in the mountains. Due to the intensive human use, the original vegetation in the main settlement areas has been greatly reduced. Nevertheless, the country has a high biodiversity in flora and fauna, which is due to the fact that the country was not covered by glaciers in the ice age, but was a retreat for numerous species. There are pine, spruce and fir forests in the higher mountain regions, the lowlands are covered with deciduous oak and maple. Olive trees and holm oaks can be found on the Black Sea.

From an ethnic point of view, the Bulgarian population is very homogeneous: 83% are Bulgarians. The largest minority are the Turks with 9.5%. These live mainly in the northeast and east in the region of the Rhodope Mountains. The Roma, 4.7%, Russians, Armenians, Romanians and Macedonians represent further minorities. The majority of the population lives in the cities of the country. Of the total of 7.7 million Bulgarians, around 1.2 million live in Sofia (agglomeration), the country’s capital. Other important cities include Plovdiv (380,000 residents) on the Maritza River and Varna (360,000) on the Black Sea.

Religious freedom has existed in Bulgaria since 1990, previously over 60% of the population was considered to be non-denominational. Today, around 86% of Bulgarians who profess a religion are Orthodox Christians, 13% are Muslims and 1.2% are Catholics. The official language is Bulgarian, a South Slavic language that is spoken in parts of Greece, Romania, Moldova and Ukraine in addition to Bulgaria. The written language is based on the Cyrillic alphabet; 98.5% of the population control them. According to COUNTRYAAH, the average life expectancy is 73 years. Population growth has been negative for several years due to the low birth rate and high emigration rate. 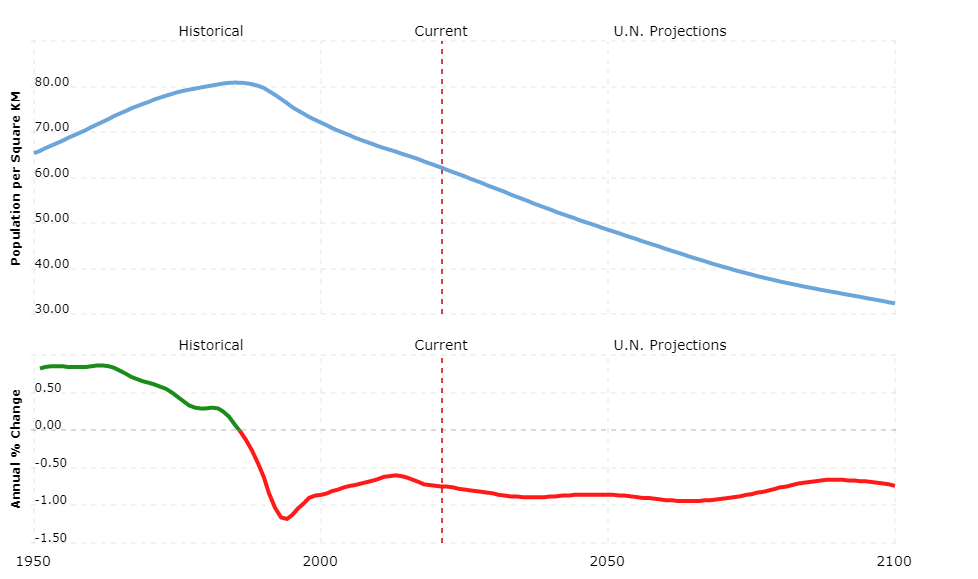 Bulgaria is, according to the 1991 constitution, a parliamentary democracy with a multi-party system. In direct election, the head of state, who is also the commander-in-chief of the armed forces, is elected for five years (since January 2012, Rossen Plewneliew). The head of state has a suspensive right of veto over parliamentary laws. The Prime Minister (since May 2013 Plamen Orescharski) leads the government and is responsible to the Parliament. A legislative assembly is made up of a people’s assembly with 240 deputies elected for four years.

Bulgaria is a central state, which is divided into 28 administrative areas.

Bulgaria is the poorest member country of the European Union. Corruption and involvement with organized crime, a lack of competition orientation and a lack of demand as well as the cumbersome bureaucracy have a negative impact.

Tourism is an important industry. The thermal baths and seaside resorts are significant sources of income for foreign exchange.

In 2001 Albania, Bosnia-Herzegovina, Bulgaria, Serbia and Montenegro, Croatia, Macedonia and Romania agreed a free trade area with effect from 2003. In 2008 Bulgaria agreed closer cooperation with Russia in the energy sector.

The currency is the Bulgarian lev (= 100 stotinki).