The Kingdom of Bhutan is located in the Himalayas and borders with Tibet ( China) in the north, with India in the east, south and west. With an area of ​​47,000 km², the country is slightly larger than Switzerland. See Bhutan country abbreviation.

Bhutan is mostly mountainous. The north is part of the High Himalayas with peaks over 7,000 m high, the highest are Kula Kangri at 7,554 m and Chomo Lhari at 7,314 m. To the south is the Vorderhimalaja, the summit of which is between 2,000 and 4,000 m high. The wide fertile valleys that run from north to south structure the landscape and are the most important settlement areas in Bhutan. In the extreme south of the country on the border with India lies the Duars plain, which is an extension of the Ganges-Brahmaputra lowlands.

Although the country is only relatively small, there are major climatic differences: In northern Bhutan there is a high mountain climate with zones of perpetual ice and very different rainfall (up to 5,000 mm on the southern slopes and less than 250 mm on the northern slopes). The snowfall limit is around 5,500 m. In the Vorderhimalaja there is a cool temperate climate with monsoon rain (rainy season May to September). The capital Thimphu is located in this area, mean January temperatures of 0 °C are measured, in July about 17 °C. The average rainfall in this area is around 1,000 mm. In the extreme south of the country, in the Duars plain, there is a subtropical monsu climate. The average temperature in January is around 17 °C, in July around 28 °C. The annual rainfall is 2,000 mm (rainy season May to September).

The country’s vegetation also differs according to the different climate zones. Overall, more than two thirds of the country’s area is forested: While summer green monsoon forests can be found in the south of the country, coniferous and deciduous forests grow in the Vorderhimalaja. Alpine mats grow from a height of around 4,000 m.

The country offers a suitable habitat for animals that have become rare in other countries, such as the collar bear and the rhinoceros. The endangered snow leopard is found in the mountain regions.

A total of around 670,000 people live in the Kingdom of Bhutan. The largest and most significant population group are the Bhotia (50%), over 35% of the population belong to Nepalese peoples. Members of Indian ethnic groups live in the south. According to COUNTRYAAH, the largest city is the capital Thimphu with about 70,000 residents (agglomeration).

Buddhism in Lamaistic form is the state religion in Bhutan, around 75% of the population are followers of this belief. The second largest religious community are the Hindus (around 24%), the Muslim minority are the Muslims (1%). The official language in the kingdom is Dzongkha, Nepali and English are also spoken.

The standard of living of the population is very low, there is no state social security, the healthcare system is inadequately developed. Per capita income is around $ 2,000 a year. Life expectancy averages 65 years, and child mortality is relatively high at around 5%. The overall literacy rate is only around 47% (women: 34%), although school attendance is free. 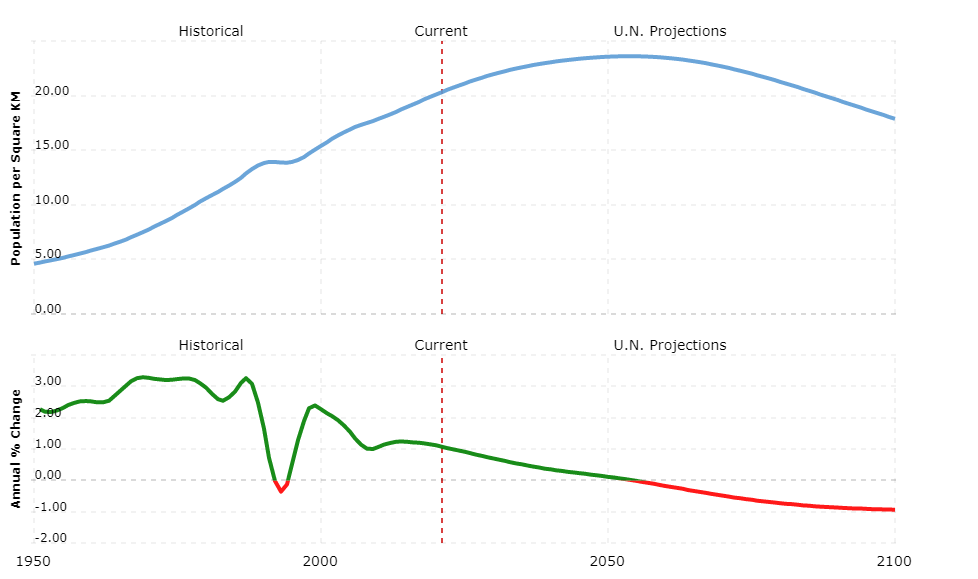 Bhutan has been a democratic constitutional monarchy since 2008. King has been Jigme Khesar Namgyel Wangchuk since December 2006. The head of government (since July 2013 Tshering Tobgay) heads the cabinet, which has to be appointed by the king. The legislature consists of two chambers: the National Council (Upper House) with 20 elected and five elected representatives from the King and the National Assembly (Lower House) with 47 members elected by the people.

The parties are the royalist “Druk Phuensum Tshogpa” (DPT, Peace and Wealth Party) and the “People’s Democratic Party” (PDP).

The country is divided into 20 districts (Dzongkhags).

Bhutan has long been one of the poorest countries in the world in terms of per capita income, but has benefited from economic growth in recent years, which averaged 8%. However, growing prosperity is unevenly distributed. Central and Eastern Bhutan have lagged significantly in development compared to the west of the country. The country’s economy is closely linked to that of neighboring India. Bhutan receives economic aid from India.

Agriculture generates 15% of gross domestic product (GDP), well over half of the workforce works here, mostly in small subsistence farms. Mainly rice, barley, maize and millet are grown, and fruit and spices are also exported. Forestry is also important for export. Sheep and cattle (including house yaks) are bred in cattle farming.

There are only a few industrial companies in Bhutan. In addition to the food and wood processing industries, the production of cement is significant. The country’s energy needs can be met by hydropower, and electricity is also exported to India and Bangladesh. Coal, ores and slate are among the mineral resources that are increasingly being developed. The biggest problem in the development of the industrial sector is the lack of trained workers. India plays the largest role as a trading partner in both exports and imports.

Tourism was of little importance to the Kingdom of Bhutan for a long time, but has increased in the recent past. It is currently the second largest source of income in the country. The main countries of origin for visitors in 2012 were Japan, the USA, China, Thailand and Germany.

There are no highways in Bhutan and the few roads that have been developed are only suitable for low traffic. There is no railway line. The only international airport is near the capital Thimbu.

The currency is the Bhutanese Ngultrum (= 100 Chhertum).