The Republic of Belarus (officially in the German-speaking area: Belarus) is located in Eastern Europe. The landlocked country on the Eastern European level is the neighbor of five countries: Poland in the west, Lithuania and Latvia in the northwest and north, Russia in the northeast and east and Ukraine in the south. Belarus has a land area of ​​207,600 km², which corresponds to about 60% of the state area of ​​Germany. See Belarus country abbreviation.

The landscape is the result of glacial glaciers that, after retreating, left a flat, slightly undulating terrain that is crossed by numerous rivers and has around 4,000 lakes of different sizes. In the north of the country, the lowlands of the Polozk lowlands, there are bogs and lakes, further to the south are plains that are bordered by the Belarusian ridges. This separates the Polozk lowlands and the Berezina plain from each other. In the Dzerzinskaja mountain, the Belarusian ridge, at 346 m, is also the highest peak in the country. In the south, towards the Ukrainian border, is the largest swamp region in Europe, Polesia (Polesje). Today it is largely drained and serves as an agricultural area. The southern and central Belarus is traversed by the river Dnieper (Dnjapro), which is very important as a traffic route, and its tributaries Berezina and Pripat towards the east towards the Ukraine. The Dnieper is around 2,200 km long, making it the third longest river in Europe, and navigable at 1,990 km it flows into the Black Sea. Capital of Belarus is Minsk,with approximately 1.91 million residents, the most populous city in the country.

Belarus has a temperate climate that is influenced by maritime influences in the west and continental in the east. It can get very cold in winter, although the temperatures do not reach the extreme freezing temperatures that are characteristic of the Eastern European plane. Summers are humid and cool, autumn is mild, spring is changeable. The average annual rainfall in the capital Minsk is 650 mm, the highest rainfall is measured in the months from June to August. The average monthly temperatures in Minsk are -6 °C in January and 17 °C in July.

Belarus has about a third of its vegetation mixed forests, and a fifth is occupied by bogs. The flora in the north mainly shows coniferous forests with spruce and pine, among which there are also birches, which can be found all over the country. Further south, preferably deciduous forests with maple, beech, oak and ash grow. The forests of the plateaus have been largely cleared in the past centuries. Remains of the original jungle can be found in the border region to the neighboring country Poland on the Belarusian ridges, as these areas were private hunting grounds of the Polish kings and later the Russian tsars. Today there are nature reserves here.

Moose, wild boar and beavers live along the numerous rivers in the forests of Belarus – especially in the named protected areas. The last surviving populations of European buffalo (European bison) can also be found on the Belarusian ridge, which have been successfully renatured here. Geese, partridges and ducks are the most common bird species in the country. The rivers have numerous species of fish.

Around two thirds of the approximately 10.3 million residents live in cities. In Minsk follows as the second largest city of Gomel (550,000) near the Ukrainian-Russian border and Vitebsk (378,000) in the northeast of the country on the Russian border. According to COUNTRYAAH, about 90% of the citizens are Russians, more than 81% of them Belarusians. Small minorities in Poland and Ukrainians mostly live close to the respective national border. Over three quarters of the population belong to the Christian Orthodox religion, 8% are Catholics, about 1% are Jewish.

The average life expectancy in Belarus is 70 years, the population growth is slightly declining due to the low birth rates and the tendency to emigrate (-0.4%). The school system has not yet been completely reformed and brought up to European standards. There is currently a ten-year compulsory education, so that over 99% of the population can read and write. The universities are also in a process of restructuring. The state interventions in the courses that are still taking place were repeatedly criticized. 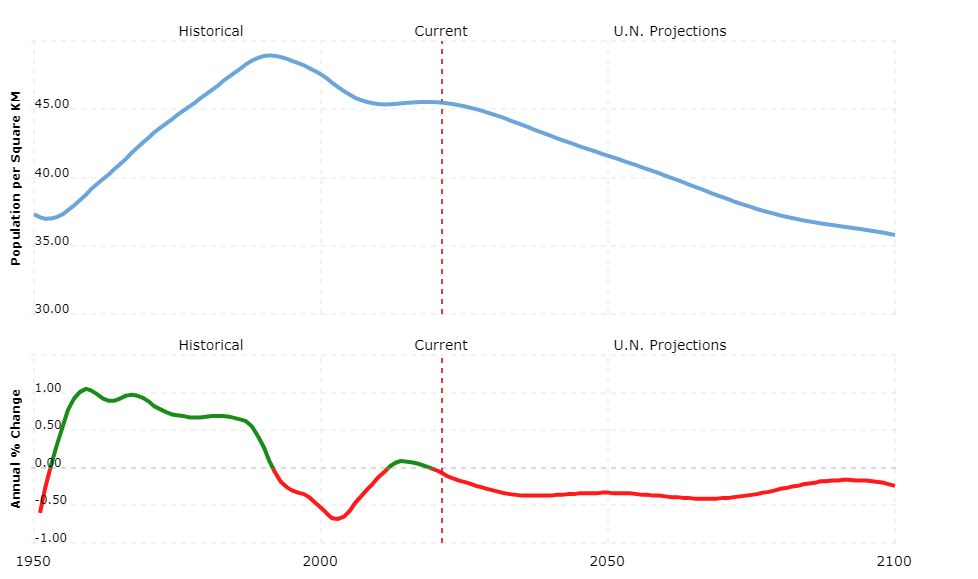 Belarus is a presidential republic with a multi-party system according to the 1994 constitution. The head of state is the directly elected president, who has very large powers (since 1994 Alexander Lukashenko). In a controversial referendum in 1996, the president’s term of office was extended to seven years. Since a constitutional amendment in 2004, he can be re-elected as often as he wants. He appoints and dismisses the members of the cabinet, which has been headed by a prime minister (Mikhail Mjasnikowitsch since December 2010) and independently decrees and orders. One of these decrees introduced a bicameral parliament in 1996, which replaced the Supreme Soviet as a parliament. The lower house, elected every four years according to a complicated majority system, has 110 deputies,

The administration is divided into six regional (Voblastsi) and one metropolitan district (Horad).

The Belarusian economy has hardly undergone any structural changes since 1995, and President Lukashenko’s policies are moving towards a “market socialism” that provides for state control of prices and exchange rates. The economic situation largely depends on Belarus being able to import crude oil and natural gas cheaply from Russia and export it again at higher prices. At the beginning of 2007, Belarus had to cope with higher prices for the import of gas and oil from Russia. Belarus also had to align its export tariff for petroleum products with the Russian rate. The resulting reduced revenue for the state budget was a severe blow to the country’s economy. Unemployment is officially only 0.5%,

In agriculture, mainly potatoes, fodder plants and flax are grown. Livestock farming is of great importance, especially cattle farming for milk production and pig breeding are practiced. Almost a tenth of the gross domestic product is generated in the agricultural sector.

Belarus has historically been an important transit country for rail, road and inland waterway traffic. The international airport is in Minsk.

The currency is the Belarus ruble (= 100 kopecks)