The Republic of Austria, with an area of ​​83.870 km², is roughly twice the size of Switzerland, but has only an insignificantly more population with 8.19 million residents. In addition to this neighbor in the west and southwest, the central European landlocked country has borders with seven other countries: likewise in the southwest with Liechtenstein,in the south with Slovenia and Italy,in the east with Hungary and Slovakia,in the northeast with the Czech Republic and in the northwest with Germany. See Austria country abbreviation.

Mountains make up two thirds of Austria’s land area. The mountain ranges of the eastern part of the Alps mostly run from east to west and are separated from one another by wide and deep valleys. The northern Alps in Austria are occupied by the Tyrolean Alps and the Salzburg Alps. The Grossglockner rises in the Central Massif of the Hohe Tauern, at 3,797 m the highest mountain in the country. Immediately at the foot of the Grossglockner is the largest glacier in Europe with 20 km² of ice and 9 km in length, the Pasterze. In the south of the country are the Ötztaler, the Zillertal and the Carnic Alps as well as the Karawanken, along which the Austrian-Slovenian border runs.

The mountain ranges mentioned are broken through at numerous points by passes. The most important and most famous are the Brenner Pass in Tyrol, which is the shortest connection from southern Germany to Italy, and the Semmering Pass in the Eastern Alps.

Due to the numerous mountains, the average height of Austria is 910 m above sea level. The lowest point in Austria is 113 m to the northeast in Burgenland on Lake Neusiedl. At 320 km², it is also the largest lake in the country. To the east is the Little Hungarian Lowland and the Pannonian Basin, which was a Roman province between the Eastern Alps, Danube and Sava in Roman times. In the north, a flat, undulating plateau landscape, which also occupies Bohemia, extends into Austria. The plateau reaches a height of up to 800 m above sea level. Austria’s most important river is the Danube, which crosses the country in a northeasterly direction in the north and includes almost all of the republic’s rivers in its catchment area.The only exception is the federal state of Vorarlberg, whose water courses flow into the Rhine. The country’s capital, Vienna, is located in the east of the country and also on the Danube.

Austria lies in the central European west wind zone in the transition area from a continental climate to an Atlantic one. In the mountain regions there is an alpine climate with very high rainfall, short cool summers alternate with long and snowy winters. In the flatter parts of the country there are hot summers and cold, low-snow winters.

The annual precipitation values ​​show a west-east gradient: they decrease from the outer edge of the Alps towards the inside and are also dependent on the respective height of the landscape. This means that precipitation in the high mountains on the southern and northern flanks of the Alps can reach maximum values ​​of up to 3,000 mm per year, whereas in the valleys in the rain shadow only 600 to 700 mm per year are measured. Statistics show an average of 935 mm per year in Klagenfurt, 840 mm in Innsbruck and 660 mm in Vienna. Also in relation to the three cities of Klagenfurt, Innsbruck and Vienna, average temperatures in January of -5 °C, -3 °C and -1.5 °C, in July they are 19 °C in Klagenfurt and 20 °C in Innsbruck and Vienna.

Austria is one of the most forested countries in Europe. Almost half of its total area is covered by closed forest areas. Numerous forms of vegetation can be distinguished: Beech-fir forests can be found in the northern and southern limestone Alps, especially in the north there is a subspecies of mountain pine, the mountain pine. There are extensive spruce forests and fir-spruce forests in the Central Alps. With increasing height follow to the tree line at 1,500 to 2,200 m Swiss pine and European larch, then there are shrubs, then grass heaths and cushion plants.

A granite and gneiss area forms the foothills of the Alps between the Alps and the Danube, the M¨¹hl and Waldviertel north of the Danube and the hilly Weinviertel with forest-free loess soil. In these regions there are isolated oak-beech forests or pines that covered the majority of the country until extensive clearing. The small Hungarian lowland, on the other hand, has a pronounced steppe flora.

Chamois, ibex, deer, roe deer, mountain hares, marmots, capercaillie and black grouse, alpine salamander and black adder are characteristic of the animal world of the Austrian Alps. The endangered golden eagle can also be found here. In the mixed mountain forests, which lie a little lower, there are hazel grouse, and a little higher the capercaillie. The subalpine coniferous forests are home to the black grouse, the ptarmigan is protected in the crevices in the high alpine area. Numerous bird species – about a hundred breeding bird species find their habitat in the Alps – leave the alpine area in the cold season and hibernate in the south.

Predatory game such as bear, wolf and lynx as well as beard and griffon vulture were eradicated by the advancing civilization in the lowlands as well as in the more remote mountain valleys as early as the 19th century, but today some of them migrate from the countries of the former Eastern Bloc or are resettled.

Austria’s population is 98% German-speaking; in Carinthia is Slovenian, in Burgenland Croatian and Hungarian are other official languages. About 91% of the citizens are Austrians. Six nationally recognized ethnic groups preferably live in the east and south of the federal territory: Croatian citizens from Burgenland (a small minority of Magyars still live in Burgenland), Slovaks in the border area with Slovakia, Slovenes in southern Carinthia and Styria, Czechs and Slovaks in and around Vienna and Hungary and Roma. According to COUNTRYAAH, over 73% of the population are Roman Catholic, almost 5% Protestant. Muslims make up another minority with 4%.

The majority of the population lives in the foothills of the Alps and the Carpathian Mountains, in the Vienna Basin ( more than 1.61 million residents in Vienna alone) and the Austrian share in the Pannonian Lowlands in the east. Other cities that are significantly smaller than the capital are Graz with 227,000 and Linz with 185,000 residents. The population density is lowest in Tyrol, Carinthia and Salzburg, 60% of the country’s area is unpopulated due to the extensive mountains.

At 79 years, life expectancy corresponds to the European average; population growth is low (0.6%). 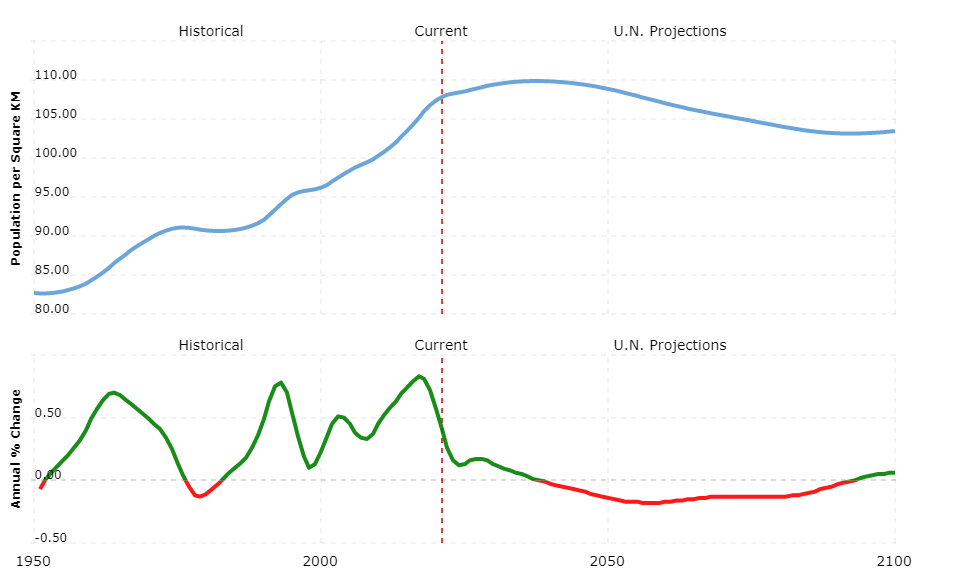 The Federal Republic of Austria is, according to the constitution of 1920 in the version of 1929, a parliamentary-democratic Federal Republic. The head of state (Heinz Fischer since July 2004) is directly elected as Federal President for six years, is commander-in-chief of the armed forces and names the Federal Chancellor (Werner Faymann since December 2008) and the cabinet in accordance with the Chancellor’s proposals. The National Council and the Federal Council form the Federal Assembly, which only meets to swear in the Federal President and to decide on a declaration of war.

The representative body is called the Federal Assembly and consists of the National Council with 183 seats and the Federal Council (State Chamber) with 62 seats. The members of the National Council are elected directly for five years, the members of the Federal Council are determined by the state parliaments according to the proportional representation law. Important parties in Austria are the Social Democratic Party of Austria (SPÖ), the Austrian People’s Party (ÖVP), the Freedom Party (FPÖ), the Alliance Future Austria (BZÖ) and the Greens.

Austria is divided into nine federal states: Vienna, Lower and Upper Austria, Salzburg, Tyrol, Vorarlberg, Carinthia, Styria and Burgenland have their own parliament with its own government, each headed by a governor. The lower administrative units in the federal states are the urban and rural districts.

Austria is a highly developed industrial country. As a member of the European Union, it has been aligning its economic system with that of the Community since 1995. As one of the wealthiest Member States, Austria also joined Economic and Monetary Union in 1999 and introduced the euro in 2002.

Two thirds of the exports go to the EU, and Eastern European nations are traditionally important trading partners. Many industries and companies are medium-sized and the majority are in the eastern parts of the country. The most important branches of industry produce in the areas of chemicals and vehicles as well as machines and steel construction. Engine and transmission production is particularly export-oriented, with an export quota of 90%, but high-tech products such as electronic components, chips and circuits are also exported. In contrast, the importance of the food and beverage industry has decreased.

Almost 5% of working Austrians are still active in agriculture and forestry. Forestry (sawmills, wood processing) in particular is highly developed due to the large forest stocks, which occupy around 39% of the state. Austria is one of the largest exporters of sawn timber.

Existing resources of iron ore and non-ferrous metals, oil and gas were and are the basis of industrial development. In the meantime, the deposits are no longer sufficient for the company’s own needs and raw materials have to be imported. Nevertheless, iron ores are still mined in Styria and processed in steel factories near Linz. Numerous hydropower plants on the many Alpine rivers also enable the domestic production of more than two thirds of the Austrian energy supply.

Another important economic factor is tourism, which brings high foreign exchange earnings into the country. Measured by the number of tourists arriving annually, the country is among the top tourist nations in the world. Tirol, Salzburg and Carinthia in particular are primarily geared towards winter sports enthusiasts, but also towards summer vacationers. Tourism also plays an important role in the capital Vienna, with more than twelve million overnight stays annually.