The Republic of Armenia is located in the Near East and borders Georgia in the north, Azerbaijan in the east, Iran in the south, the Azerbaijani exclave Nakhichevan in the southwest and Turkey in the west. With an area of ​​29,800 km², the country is about the size of Belgium or the German state of Brandenburg. See Armenia country abbreviation.

The landscape is characterized by mountains that belong to the Caucasus. 90% of the state is over 1,000 m, about 40% over 2,000 m above sea level. In the north and east of Armenia, the Little Caucasus mountain ranges rise to altitudes of over 3,000 m. The highest peak in the country is the Aragaz at 4,090 m. This area is at high risk of earthquakes due to the clash of the Arab and Eurasian plates. The Armenian Highlands are located in the south-west of Armenia, and the mountains to the east and southeast which belong to the East Anatolian Mountains.

The capital Yerevan(Yerevan) is located in the Ararat plain. Another major plain is the valley of the Arax River, which originates in Turkey and forms part of the Armenian border with Turkey and Iran. The largest lake in the country, Lake Sevan, lies at an altitude of around 1 900 m and has an area of ​​1 244 km².

Armenia’s climate is continental. Hot summers and very cold winters are characteristic. In the capital Yerevan, which lies at an altitude of 907 m above sea level, the average January values ​​are -5 °C and the average July values ​​are around 25 °C. In summer, maximum values ​​of up to 45 °C can be reached, in winter the temperatures in some regions can drop to -40 °C. The annual rainfall is 350 mm per year and is therefore very low. Up to 500 mm of precipitation can sometimes fall on the mountain slopes in the north of the country.

Only about 12% of the country’s area is covered by forests, which are mainly on the mountain slopes of the Little Caucasus in the north (beech, oak, elm, ash) and the river valleys in the southeast (oak, birch) of the country. Due to the low rainfall, the vegetation is predominantly dry, there are dry and mountain steppes with bushes and shrubs, and above 2,000 m there are also alpine mats.

Around 3 million people live in the Republic of Armenia, 1.1 million of them in the capital Yerevan alone(Yerevan). In total, around two thirds of all Armenians live in the metropolitan area. Armenia has the most homogeneous population structure of all the successor states of the Soviet Union: Around 98% of the citizens are Armenians, and there are also minorities of Azerbaijanis, Russians and Kurds. Due to the Nagorno-Karabakh conflict, many Russians and Azeri left the country, while around 250,000 Armenians immigrated again. According to COUNTRYAAH, 95% of the population belong to the Armenian Apostolic Church, which has been the state religion since the beginning of the 4th century, making it the oldest national church in the world. Religious minorities are Muslims and members of the Russian Orthodox Church. The national language is Armenian, which is one of the Indo-European languages.

About a quarter of the Armenian population lives below the poverty line. The country’s formerly well-developed health system largely collapsed after the dissolution of the Eastern Bloc, and food and energy supplies were insufficient in the 1990s. The average life expectancy is 76 for women and 68 for men. Population growth is estimated at around -0.25%. Due to the poor economic situation, Armenians are still emigrating abroad, and emigration has decreased steadily in recent years. 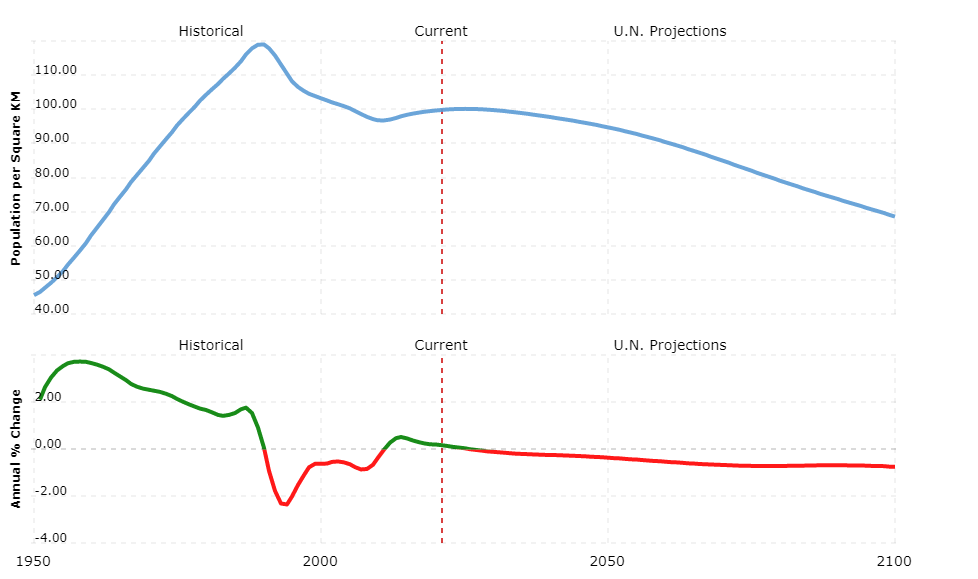 The 2005 constitution declares Armenia a republic with a presidential system. The head of state is the directly elected president (Serge Sarkisjan, since 2008), who has extensive powers, for a term of five years. The Council of Ministers, led by the head of government, conducts government affairs. The legislature lies with the National Assembly, which consists of one chamber (Azgayin Zhoghov) with a total of 131 seats. The members of the National Assembly are directly elected for four years.

As a satellite of the USSR, Armenia was one of the industrially most developed republics and exported machine parts, electrical goods, textiles and chemical products. The main trading partners were the other Soviet republics. The great earthquake of 1988 destroyed over 10% of the country’s total industrial facilities. Other factors damaging to the economy were the war, which broke out in 1988 over the Nagorno-Karabakh region and continued until the ceasefire in 1994, and the economic blockade imposed by Azerbaijan since 1991. With the collapse of the Eastern Bloc, Armenia lost most of its sales markets. The country was dependent on food and especially energy imports.Many of the remaining industrial plants could hardly be operated due to the shortage of electricity.

Since the mid-1990s, the switch from small and medium-sized businesses to the private sector and international financial aid has led to positive economic growth rates. The Armenian economy has seen double-digit growth for several years, but was hit hard by the international financial crisis. A recovery has been observed since 2011.

Approx. 45% of the workforce is employed in agriculture. The main crops (especially in the Ararat plain and in the Arax valley) are vegetables, fruit, cereals and potatoes, as well as cotton, tobacco and wine. Much of the agricultural land is used as pasture for sheep and goat farming.

For a long time, the industrial processing of existing raw materials (especially ores) was blocked by the energy shortage; Since the construction of the Metsamor nuclear power plant, the state has even exported electricity. In addition to metal processing, textile and food processing industries as well as companies in the luxury food industry are gaining in importance.

Armenia joined the World Trade Organization (WTO) in 2003. In 2007 the country agreed to closer economic cooperation with Iran, particularly in the energy sector.