Amsterdam has a lot to offer when it comes to attractions and sights. Here you will find some of the world’s best art museums! Also, you will find a number of other weird museums, such as the sex museum and the hashish museum. In addition, Amsterdam offers beautiful palaces and smart houses. Take your camera and go exploring in Amsterdam! 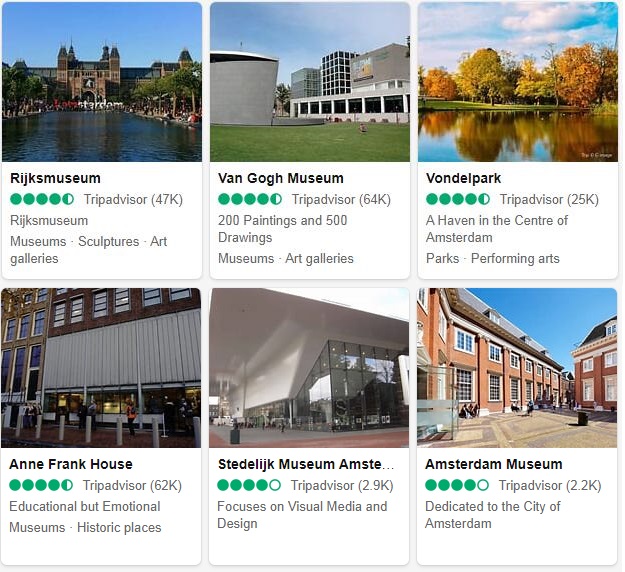 Anne Frank’s House
Anne Frank was a German-Jewish girl who hid from the Nazis in Amsterdam during the Second World War. She died of typhoid in 1945, but her diary lives on with her powerful history. The address is Prinsengracht 263-267.

Oude Kerk
Right next to the Red Light District is Oude Kerk, the oldest church in Amsterdam. Oude Kerk is probably from 1306. Notice especially the vault, which is the largest vault of medieval wood in Europe. Rembrandt was a regular guest at Oude Kerk. The church is open every day, and it costs five euros in entrance fees. The address is Oudekerksplein 23, just northeast of Damplassen.

Royal Palace
This castle, which became a town hall, is one of the most beautiful buildings in Amsterdam. The Royal Palace is located on Dam Square, and you can enter the Royal Palace and view some of the finest in 17th century architecture. The civic hall is approx. 30 meters high. The architect has drawn inspiration from, among others, Rome.

Nieuwe Kerk
This beautiful church is located on Dam Square in the center of Amsterdam. The church is a landmark in the city. Construction started in the early 1400s. Here the Dutch royals are crowned. Nieuwe Kerk is a major tourist attraction today. It is open every day, and it costs eight euros to enter.

Madame Tussauds
You probably know the London wax figures, and this cabinet is not that much worse. In addition to famous people of all types, you can also try the Da Vinci Code or Pirates of the Caribbean for the movie of the same name. Madame Tussauds is located at the famous Dam Square.

Rijksmuseum
This is the leading museum in the Netherlands for older art and is considered one of the finest art museums in the world. The Rijksmuseum opened in 1885 and has a solid collection of Dutch, Baroque art. The most famous work of art is perhaps the Night Watch by Rembrandt from 1642. The museum is located at Museumplein, south of Amsterdam.

Stedelijk Museum
Not far from the main train station is the Stedelijk Museum’s temporary exhibition. You can find it in the old post office at Oosterdokskade. The museum is open every day from 9 am 1000 to 1.800. Here, modern art is presented by the greatest and most famous artists, such as Andy Warhol and Paul Chan. The museum has been renovated in beautiful premises at Museumplein.

Rembrandt’s house
In the street Jodenbreestraat you find the house where Rembrandt lived and painted many of his most famous pictures [see picture first in the article]. He lived here in the period 1639–1658. The building itself dates from 1607. The Rembrandt House Museum is open every day of the week. Here you will experience more than fantastic pictures and artwork, including how paint was made in Rembrandt’s time.

Heineken Brewery
Most of us have probably both heard of and drank Heineken beer. The brewery was established in 1863 and today has more than 60,000 employees worldwide. Here you will find an exciting beer museum and a multimedia center. The address is Stadhouderskade 78, and the opening hours are at. 1000-1800 every day except Mondays. The entry price is ten euros; children under 18 must be with guardians.

Blomenmarkt
Blomenmarkt, the world’s only floating flower market, is a major tourist attraction. You can find the market on the Singel canal, between Koningsplein and Muntplein. Large quantities of flowers are offered from houseboats and other floats. In December, the selection will be extended to Christmas trees.

Nemo
Museum The Nemo Museum is a technical museum. A little humorous, the museum says that here it is forbidden not to touch. That’s because the Nemo Museum tempts with interactive exhibits where visitors can experiment and explore themselves. The museum is located just off the main train station. It is open every day except Mondays. The address is Oosterdok 2.

Amsterdam is charming streets, coffee shops, brown bars and fantastic art. You will easily be able to experience everything during a weekend.

Day 1 in Amsterdam Attractions and Tourist

From Anne Frank’s house you go south to the church Westerkerk (which has the best viewpoint of the city!). Continue a short distance up Prinsengracht on the opposite side before heading west along the very beautiful Bloemgracht. Take the second bridge across the canal and continue until you reach the Egelantiergracht. Follow this back towards Prinsengracht. Take another canal bridge and go to the Ebelantierstracht. Go east (right) until you meet the canal. Here you will see many of the typical poor houses the area was known for in the 17th century.

Then follow Prinsengracht north until the canal is crossed by Bruwersgracht. To the left you should now have the Noordermarkt area, which is well suited for a bar or cafe visit and some relaxation.

Zandhock in Amsterdam
After the watering hole visit Brouwersgracht west. Take the first canal bridge and follow the road along Binnen Oranje Straat until you reach Hendrik Jonkerplein. From here, go straight north until you reach Zandhock. This is an area with a number of cozy houses. Previously, there was a large sand market, ie a place where sand was sold here, and the area was therefore important in view of the urban development and construction of Amsterdam and the dikes around it.

Then go Taanstraat to Realengracht. Take the first canal bridge and you will meet Prinseneiland. Go to Galgenstraat. Once upon a time this was a street with a view to the hangers, hence the street name. Go Galgenstraat east to Biekersgracht and follow this down to Hendrik Jonkerplein. Now, maybe a snack and a drink can fit? Then go back to Anne Frank’s house and then continue east to Damplassen in the center.

Damplassen is located in the middle of Amsterdam. Here you will look at life and enjoy yourself. Remember to bring the Royal Palace, Magna Plaza, Nieueve Kerk and the National Monument, [see image above]. Dam Square has long been the heart of Amsterdam, and as early as the 1600s, the square was made by the renowned painter Lingelbach as a place of seething life where rich customers traded with a number of prominent traders.

Royal Palace, located on the west end of Dam Square, was originally a castle that was converted into a town hall. The Royal Palace has a classic façade, is richly decorated and is today one of Amsterdam’s foremost sights.

Magna Plaza is located directly on the west side of the Royal Palace and was originally a post office built in lavish Neo-Gothic architecture. The building was criticized for its appearance and later rebuilt. As late as the 1990s, Magna Plaza was turned into a mall.

Nieuwe Kerk is Amsterdam’s second church church. It was built in the 1300s. The church is located just north of the Royal Palace.

In the evening, it’s time to visit Amsterdam’s brown cafés. It’s not dangerous if you believe it. Rather, it is good for the soul. Here is a pleasant atmosphere and simple but good food and good drinks are served. Typical of a brown cafe is that it is low-ceilinged, the interior is dark, and the cafe has poor lighting. Previously, tobacco smoke was close to the room. A brown cafe is the natural gathering place for those living nearby. Many of Amsterdam’s cafes have roots dating back to the 17th century or earlier.

We propose two very special cafes, located in the district of Nieuwe Zijde. One is called ‘t Dokterje and is one of the brownest cafes available. The address is Rozenboomsteeg 4. The other is called In De Wildeman. Here you can choose from more than 80 beers from all over the world. This more modern cafe has address Kolksteeg 3.

After a good breakfast at the hotel, we suggest you take a taxi or go to the Museum Square, located in the south of Amsterdam, where you will find three of the world’s best art attractions, the Rijksmuseum, the Van Gogh Museum and the Stedelijk Museum. – 4 hours just for a quick overview of the art found at each of these museums, so you should not have the ambition to bring everything with you, but at least one of the museums must be visited;

Amsterdam Rijksmuseum The
Rijksmuseum [see picture first in article] is the first museum you encounter if you come from the center of Amsterdam. The museum is surrounded by gardens with beautiful statues. The Rijksmuseum offers the world’s largest collection of Dutch masters. Get with you Frank Hals, Vermeer and not least Rembrandt. Here hangs Rembrandt’s Night Watch, which is perhaps the world’s second most talked about image after
Leonardos da Vinci’s painting of Mona Lisa (Louvre in Paris).

Van Gogh Museum
What Van Gogh Museum is for something obvious. The museum shows Van Gogh’s life and pictures. This highly acclaimed, famous and somewhat crazy painter is fascinating. Also the museum building with its special architecture is worth an extra look. Also, take a walk to the opposite side of the park (easterly direction) from the Van Gogh Museum. Here you will find the Ravensbrück Monument, which is in memory of female Holocaust victims.

Stedelijk Museum The
Stedelijk Museum is the third major museum at Museumplein and is one of the world’s most beautiful museums of modern art. If you want an experience for the mind and soul, this is the place. Here you will find works by Chagall, Man Ray, Malevich and Karel Appel.

After the museum visit, we suggest you go to Oude Zijde. Relax with a lunch before visiting the Oude Kerk church in Ouderkerksplein 23. This beautiful church from the early 13th century is located in the middle of the brothel district, so we can safely say that “whore and madonna” go hand in hand. The church has a beautiful bell tower with a full 47 bells and beautiful 14th century ceiling paintings. St. Mary’s Chapel has stained glass windows. The main attraction, however, is the giant church organ from 1724. The organ is surrounded by biblical figures made of marbled wood.

Walk from the church to the Nieuwmarkt cobblestone square. This is Amsterdam’s Chinatown. The tradition believes you will find antique market here on Sundays. From here you can follow the St. Antoniesbreestraat until you reach the Waterlooplei street and the Waterlooplein square. You have now come to the Jewish Quarter. Here you will also find a very special multimedia show (Holland Experience) and a street market, where you can find all kinds of goods.

Spend the rest of the day shopping and enjoying the big city life. If you want a canal trip, you can arrange it with one of the many tourist boats departing from the top of the main railway station in Nieuwe Zijde. If you plan your trip around lunchtime or in combination with dinner, we recommend that you reserve a place in advance. Your hotel can help you. Channel trips at other times of the day will usually not be difficult to get, and tickets can be arranged at the marina.

In the evening we suggest a good restaurant visit. Why not try Café and Restaurant Amsterdam, located on the corner of Van Hallstraat and Haarlemmerweg, at Watertorenplein 6. If your hotel is not nearby, take a taxi. The restaurant is located in an industrial building (renovated and redeveloped) and offers a very special atmosphere and not least good food.